Bringing Britain's endangered wildlife back from the brink

The natterjack toad, petalworts and the sand lizard are some of Britain's most endangered species. To fight for their survival the UK's biggest conservation organisations are joining forces. 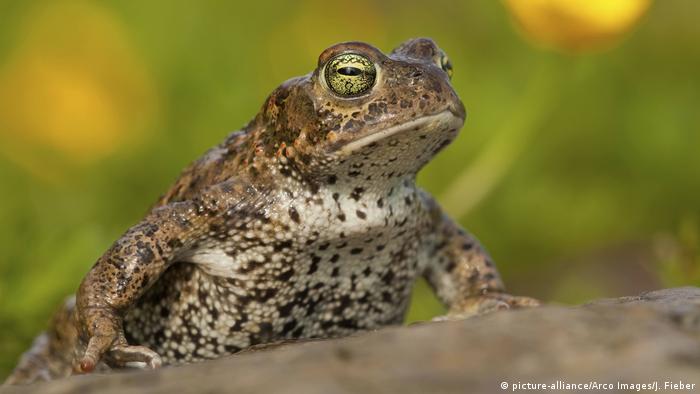 Discussing the weather is a national pastime for the Brits, and the talk among a group of volunteers gathered at Sefton Dunes to save the natterjack toad is no exception.

It's a glorious winter day, and sunshine sparkles off the dunes, a short way from Liverpool on England's north-west coast — not a part of the world known for fine weather.

Read more: Will Brexit be bad for biodiversity in Britain?

The team is digging out ponds to create suitable habitat for the rare toads. This time last year, the job would have meant shoveling through snow. Today, temperatures nudge north of 20 degrees Celsius (68 degrees Fahrenheit), on what has since been declared the UK's hottest winter day on record.

There are even reports of wildfires on moorlands in nearby Lancashire, and while humans might be basking in the unseasonal sunshine, it's not great for the toads.

"It couldn't be much worse really, it has been such a dry winter," says Andrew Hampson of Amphibian and Reptile Conservation (ARC), who is coordinating the 20-odd volunteers. 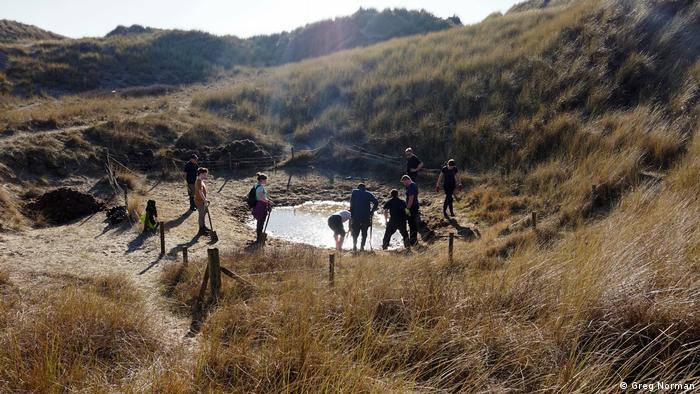 "There's rain due next week, and it would be great for us if it didn't stop for two weeks," Hampson says. The toads thrive best, he says, after a long, wet winter and a dry summer.

The volunteering day is part of the Gems in the Dunes project to boost numbers of the natterjack toad, as well as the nationally threatened sand lizard.

Gems in the Dunes is, in turn, part of a nationally coordinated project, Back From The Brink, which brings together seven of the UK's biggest conservation organizations to try and save 20 of England's most endangered wildlife species – and hopefully improve the fortunes of another 200.

It is the first time the likes of ARC, the Royal Society for the Protection of Birds (RSPB), Buglife and Plantlife have collaborated so closely.

"There has been this growing effort of finding out where can the different organizations support each other," James Harding-Morris, one of Back From The Brink's national coordinators, told DW.

The initiative, he says, "is about how we could achieve more working together in terms of conservation than alone. Nothing has been attempted before on this scale."

Sefton Dunes, one of the largest undeveloped dune systems in the country, is a good example. Fiona Sunners, the Gems in the Dunes project manager, explains that as well as significant reptile and amphibian populations, it's home to rare insects such as the northern dune tiger beetle and plants like bryum mosses and petalwort. 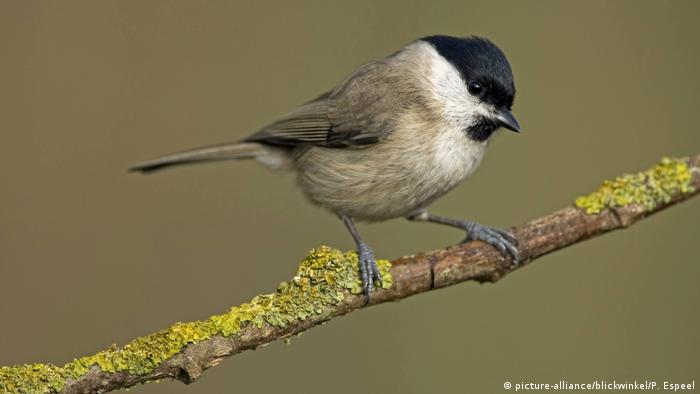 Amphibians, mammals, plants and birds: Collaborative conservation takes into account the multitude of species in a single ecosystem

Working with specialists across different areas of conservation means they can expand their knowledge, cover more ground and better protect entire interdependent ecosystems, rather than focusing on any one species.

"Before, we would sort of do our own thing," Sunners told DW. "But now if we have an issue around petalwort we can just pick up the phone to Plantlife. And if I need to know something relating to the tiger beetle, I can speak to Buglife."

Certain species the project is trying to save, like the natterjack toad and sand lizard, are still common elsewhere in Europe, but increasingly rare in the UK.

Some in the top 20, such as the willow tit, have seen their populations collapse by more than 90 percent in the last 40 years. Then there are species that are being reintroduced to once-native habitats – like the pine marten in Northumberland. 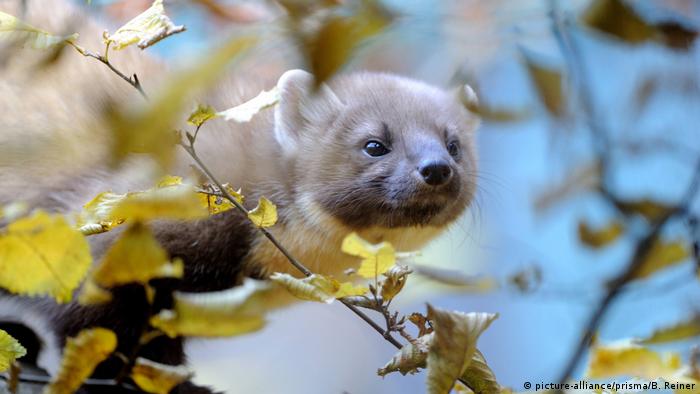 The pine marten, which had become extinct in the UK, is back

And others are exceedingly rare. "The Cornish path moss is found on two sites in Cornwall and nowhere else on earth," Harding Morris says. "The combined size of those patches is 0.61 meters squared, which is about two sheets of A4."

Back From The Brink launched in 2018 and is already yielding results. Last year, the chequered skipper butterfly was reintroduced to the county of Northamptonshire for the first time since 1948, and a project in Dorset revived one scarce plant population – with a surprising approach.

"In Dorset, we are working on this rare plant, marsh clubmoss," Trevor Dines, a botanist with Plantlife told DW. "Around 85 percent of the plant has disappeared from the area through development, including digging for coal."

Conservation often involves stepping away from habitats and leaving nature be. But, Dines explains, some species actually benefit from disturbance – including clubmoss.

"So, we decided to drive a five-ton tractor back and forth over a colony of these plants, some 3,000," he says. There are now an estimated 12,000 specimens of the plant.

"It's not always a case of 'don't walk on the grass,'" Dines jokes.

Keeping the funds flowing for such diminutive species is a challenge. Back From The Brink has secured £7 million (€.8.1 million, $9.2 million) from the British government's National Lottery Heritage Fund to run for three years.

What happens after 2021 is an open question. Being able to show concrete results would boost the project's chances of future funding. But in conservation, they are far from a given. 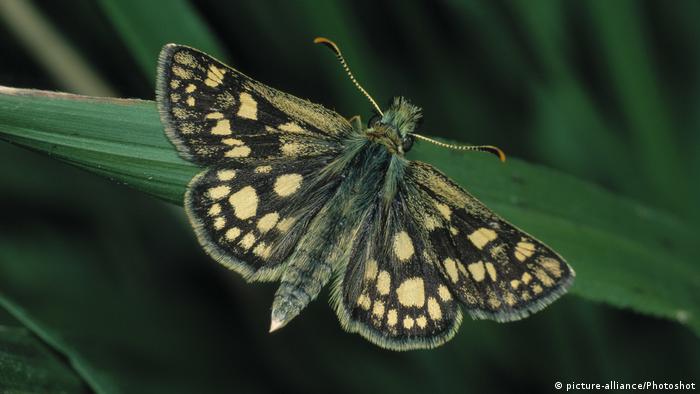 The factors behind the long-term decline in insect, plant, bird and mammal numbers – habitat destruction, intensive farming and, of course, a changing climate – aren't going anywhere.

That glorious early sunshine isn't just putting pressure on the natterjack. As the climate changes, species are being forced out of their usual territory.

"Most species are on the move because of climate change, as some parts of their geographic ranges become climatically less suitable than they used to be," Chris Thomas, an evolutionary biologist with the University of York, told DW.

Read more: Species on the move

That also implies a more nuanced approach to conservation.

"We need to have a change in perspectives," Thomas says. "We should be perfectly happy when new species arrive… but not weep uncontrollably when a previous occupant of a particular nature reserve, for example, disappears – provided that the species as a whole is not endangered."

Still, at the end of a long day's work, the volunteers at Sefton Dunes are hoping that come the breeding season, the natterjack toads will find the new, smoothly contoured ponds attractive enough to keep the local population going.

"In terms of natterjack toads, about eight to 10 years is really the time needed to assess how a population is changing," Hampson says. "For a healthy population you need a mix of sizes really, if they are all roughly the same size that could just indicate one good year of breeding. It does take time."