Brazil's president said that environmental challenges must be met while respecting "national sovereignty" and announced a meeting of countries that share the Amazon to tackle the devastating fires. 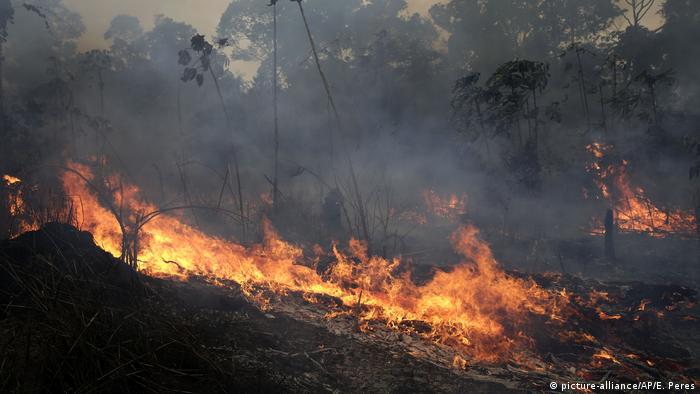 Brazilian President Jair Bolsonaro said on Wednesday that he would gather South American countries that share the Amazon rainforest to discuss its protection and development.

Bolsonaro pushed back at international allegations that he was responsible for weakening environmental safeguards in Brazil that have led to farmers, developers and others setting fires to clear land more aggressively this year in the Amazon.

The meeting with regional neighbors, which excludes Venezuela, will be held on September 6 in Leticia, Colombia, and its goal is to "to come up with our own unified strategy for preserving the environment," Bolsonaro told reporters.

The Brazilian president made the announcement after a joint meeting with Chilean President Sebastian Pinera in Brasilia.

Pinera, who has a close relationship with Bolsonaro, joined him in a statement to declare that environmental challenges must be met while respecting "national sovereignty."

Each country should have control over the "rational and sustainable use of their natural resources, in line with their environmental obligations and needs of their citizens, including indigenous peoples," the joint statement read.

The declaration, along with the call for countries in the region to band together, follows Bolsonaro's accusation against Germany and France, whom he said had tried to "buy" Brazil's sovereignty through their pledge of $20 million (€18 million) in aid at the G7.

Bolsonaro had rejected the aid previously, but then said he would consider taking it if French President Emmanuelle Macron would withdraw comments he had made about him.

But on Wednesday, the Brazilian president escalated his deeply personal dispute with Macron, accusing him of portraying himself as "the one and only person" concerned about the environment.

The back and forth between Brazil and France’s presidents has escalated to the point of endangering the EU-Mercosur trade deal that has taken decades to negotiate and was finalized this year.

Brazilian Foreign Minister Ernesto Araujo said his country supported Bolsonaro in his dispute with Macron, adding that Brazil was fighting forest fires like never before and that he hoped "people who legitimately care about the environment see that Brazil is the hero and not the villain."

Vice President Hamilton Mourao, who is widely considered to be a moderate voice in Bolsonaro's government, came out against the international criticism over the Amazon fires.

In an opinion piece published in a conservative newspaper, Mourao criticized what he saw as an "international campaign" against Brazil and said the country "does not lie and nor does its president, its government and its institutions."

According to the latest official figures, some 1,044 new fires were started Monday and Tuesday, bringing the total this year to 83,329. More than half of the fires have taken place in the Amazon basin.

French president and G7 summit host Emmanuel Macron's threat to ditch a trade deal over the fires in Brazil met with immediate resistance from fellow EU member states, including Germany and the UK. (25.08.2019)

Brazil's Ministry of Defense has authorized some 40,000 troops to take part in operations to combat the blazing wildfires. Smoke from the fires has covered the city of Porto Velho and brought protesters into the streets. (26.08.2019)