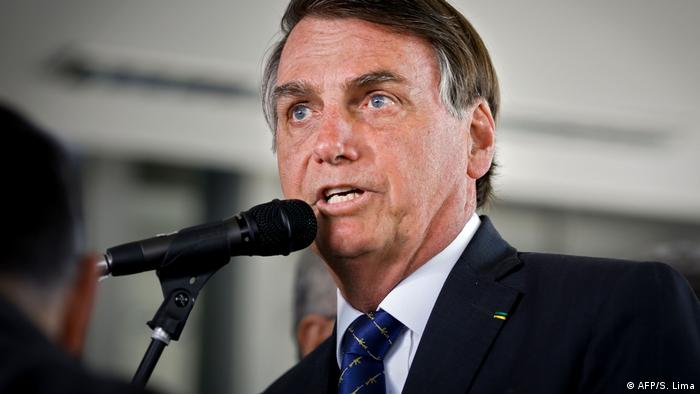 The measure would permit both indigenous and third-party developers to take part in the new development.

The president described the act, which still needs parliamentary approval, as a "dream" while indigenous leaders have labeled it a "genocide bill."

"I hope that this dream ... comes true," the 64-year-old president said of the plans. "This big step depends on Congress."

Read more: Should nature be given rights enshrined in law?

Many of the indigenous lands affected by the bill are situated in the Amazon region of the Latin American country.

Anticipating a backlash, Bolsonaro, a climate skeptic, added: "We will be pressured by the environmentalists. Those people, if I could, I would confine them to the Amazon region since they like the environment so much."

Some 600 Brazilian indigenous chiefs came together in the Amazon state of Mato Grosso last month to denounce what they called the government's "genocide, ethnocide and ecoside."

Earlier on Wednesday, in a move that further angered environmentalists and indigenous leaders, the Brazilian Justice Ministry announced that former missionary Ricardo Lopes Dias was to become the new coordinator-general of the government unit, which is part of the indigenous affairs agency known as Funai. The announcement raised fears about possible threats to health and culture among indigenous tribes, with some leaders protesting his appointment in an open letter.

Leaders of the Matses community, located near the border with Peru, wrote that in the 2000s Dias had "manipulated part of the Matses population to found a new village" where an evangelical church would be constructed.

Activists have concerns over Dias' track record in the Amazon following a 10-year spell as a member of the New Tribes nonprofit group. Now known as Ethnos360, the Florida-based group sends missionaries from local churches around the world, many of whom head to indigenous areas.

Brazil officially counts 28 groups of isolated indigenous tribes in the Amazon. President Bolsonaro has previously stated that indigenous communities should integrate into Brazilian society and that their lands can disrupt development, as well as pose a threat to national sovereignty.

On the 70th anniversary of India's constitution taking effect, the far-right Brazilian president was given an honorary title in New Delhi. Protests against a new citizenship law continued amid Republic Day celebrations. (26.01.2020)