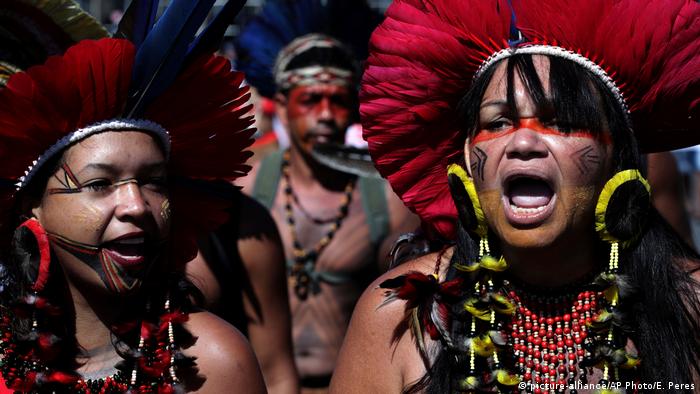 Rarely has something so precious fallen into such unsafe hands. Since Jair Bolsonaro took the Brazilian presidency in 2019, the Amazon, which makes up 10% of our planet's biodiversity and absorbs an estimated 5% of global carbon emissions, has been hit with a record number of fires and unprecedented deforestation.

At the same time, those who have proved the most responsible guardians of the forest, are under increasing pressure and threatened by escalating violence. Since Bolsonaro came to power, there has been an increase in invasions of indigenous lands by loggers and miners, and seven indigenous leaders have been killed in land disputes.

In November, a group of Brazilian lawyers and human rights groups asked the International Criminal Court to indict Bolsonaro for inciting genocide against Brazil's indigenous people.

They argue that these communities are at increased risk of violence because "the means of existence of the indigenous peoples are grounded on their relationships to the land, the forest, wildlife and water," and that threats to the forest put them "at risk of falling victim to crimes against humanity."

'Bolsonaro is taking away our future'

Bolsonaro, who has compared indigenous people to zoo animals and accused indigenous leaders of working to promote foreign interests in the Amazon, has repeatedly threatened to end the policy of land demarcation, whereby indigenous communities are granted the right to clearly defined territories.

He has also attacked the National Indigenous Foundation (FUNAI) — the governmental agency for indigenous interests — cutting its funding and powers and forbidding its employees from speaking to the press.

At the same time, the right-wing president has scrapped environmental regulations and is set to legalize 300,000 illegally occupied rural properties — 86% of them in the Amazon territory and many of them commercial farming or logging operations. 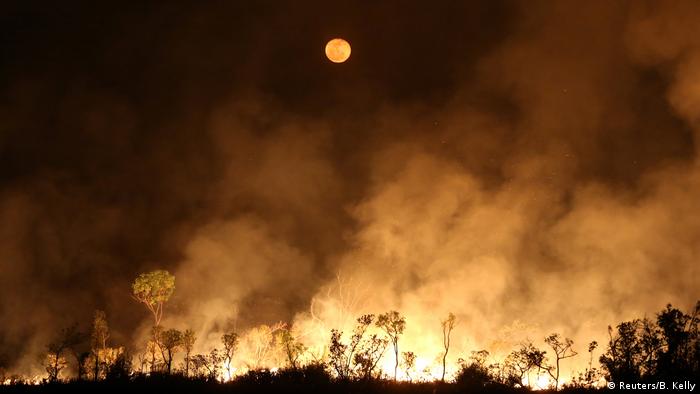 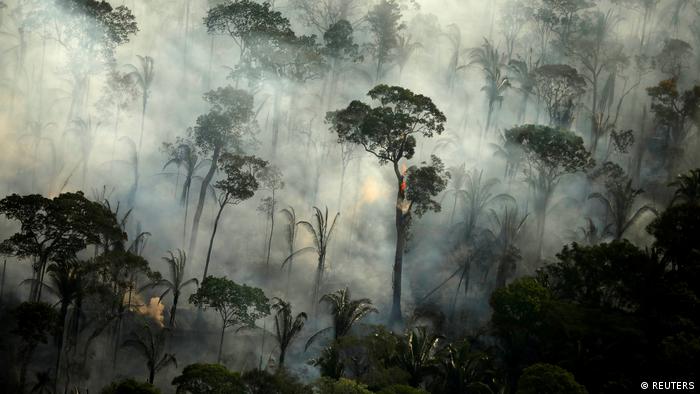 The Amazon saw unprecedented fires in 2019, with the equivalent of 8.4 million football pitches going up in flames

"Bolsonaro is taking away our future," indigenous conservationist Olinda Muniz told DW. "A president who encourages genocide and does nothing to curb environmental disasters is a person who should never represent this country."

A recent study comparing Brazil, Australia and Canada pointed to greater biodiversity in areas administered by indigenous peoples and is just the latest research to suggest these communities are exceptionally good at preserving the land they live from.

Yet in Brazil, as elsewhere, their way of life has been under threat since colonialists first arrived from Europe and began exploiting the land's natural resources and imposing foreign ways of life on its people.

Now, the lawyers argue in their action against Bolsonaro that indigenous lifestyles are being portrayed as a problem in themselves, "hampering the national development plans," and "infrastructure projects, mining enterprises, logging activities and agribusiness ventures in forested regions."

Muniz and her husband Samuel Wanderley, both of the Pataxó Hã-Hã-Hãe ethnic group, founded the Kaapora project in the Caramuru Paraguaçu indigenous territory in the Brazlian state of Bahia. They are restoring grazing land back to forest, protecting remaining trees and growing new ones, so the land can once more be a refuge for wildlife. 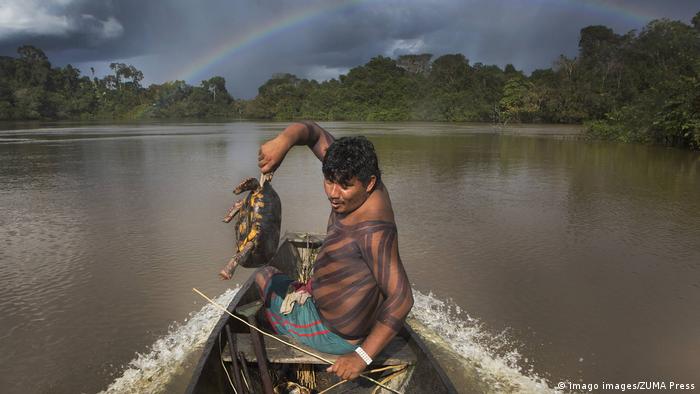 The Amazon's indigenous peoples have lived in the forest for countless generations. Since Europeans arrived, both their culture and envrionment have been under threat

Now she fears that efforts like hers are under threat. "We have no guarantee of compliance with our constitutional rights," Muniz said. "Social movements are being attacked head-on, indigenous, black, environmentalists, landless workers, fishermen, etc."

The Kaapora project is one of many in Brazil through which indigenous communities, independently or in partnership with NGOs, are helping revive the forest and maintain traditional ways of life in the midst of modernity — combining traditional knowledge with new technologies and increasing independence from markets and governments that have rarely worked in their interests.

The Ashaninka in Acre state, for example, have established cooperatives to grow food and provide for their community. They, and groups like the Pataxó in Minas Gerais state, are also teaching non-indigenous communities about sustainable agriculture. By creating a space for dialogue with the external community, and young people in particular, they hope to pass on their respect for nature.

Staking out their own land

Meanwhile, in southern Brazil, the Kaingang are working to reforest their land with araucaria, an indigenous tree which produces a fruit they can eat and sell, and that supports indigenous wildlife. For Marcio Kokoj of the Kaingang Guarani Indigenous Environmental Association, the Bolsonaro government feels like a throwback to Brazil's military dictatorship that murdered thousands of indigenous people, drove thousands more from their lands, and tortured many and enslaved others between 1964 and 1985.

"The greatest concern today is with the attacks on the demarcations of our lands, we therefore need to make self-demarcation," Kokoj  said. "If it depends on Bolsonaro, he will open up areas for large-scale agricultural production, multinationals, mining. That worries us a lot."

Self-demarcation is when indigenous communities draw the boundaries of their own territory, often expelling illegal occupants, such as loggers.

Last July, the indigenous Munduruku from the Tapajós region in the Amazon state of Pará, kicked out illegal loggers who had invaded their territory which they began to self-define in 2014.

The Munduruku were armed with arrows, songs, war paint and "the wisdom of our ancestors," they said in a note to the Indigenous Missionary Council that made clear their intention to continue defending their own land if governmental institutions fail to do so.

Calling on the international community

Kokoj too says the Bolsonaro government should not expect the forest's guardians to step aside without a fight. "We indigenous peoples, over the years and the governments, have created resistance that is still effective today," he said. 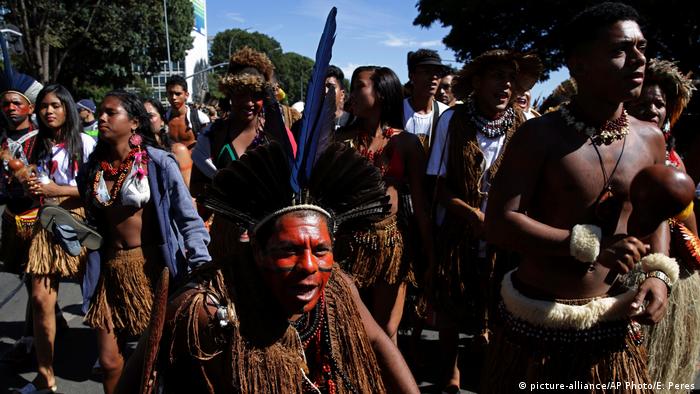 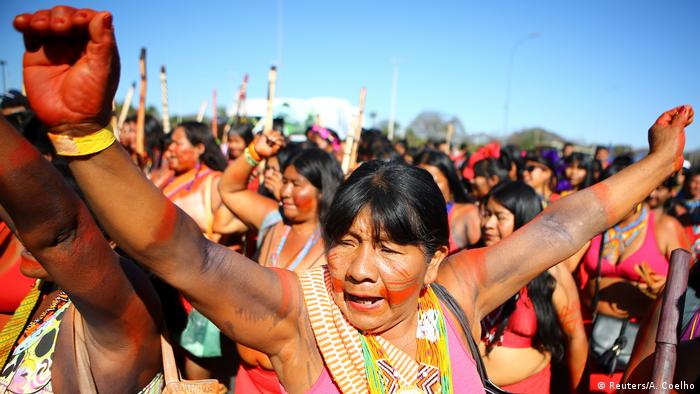 In defense of their land and culture, Brazil's indigenous communities have long allied with broader social movements, called out violations of their rights to international bodies, and above all, insisted on remaining in their territories despite threats and violence. Since Bolsonaro came to power, indigenous activists have taken the streets to assert their land rights and protest their treatment by the right-wing government.

But Kokoj stresses that support from the wider population of Brazil and the international community is vital.

The group of Brazilian lawyers lobbying the International Criminal Court says the prosecutor at the international tribunal in the Hague is expected to investigate their complaint. It remains to be seen if this will lead to an indictment of Jair Bolsonaro — and amount to the kind of international pressure Brazil's indigenous communities hope for.