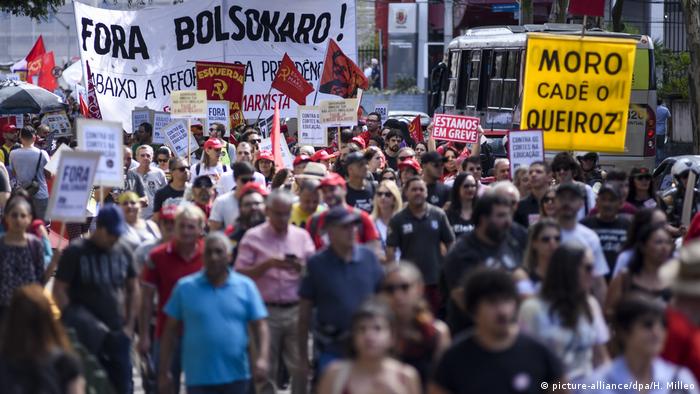 Tens of thousands of Brazilians answered trade union calls to take part in a general strike on Friday, closing down public transport, bringing traffic to a halt and causing chaos across the country.

Police used tear gas in the cities of Sao Paulo and Rio de Janeiro, where they faced burning barricades and tires. Several injuries have been reported from smoke inhalation as well as one incident in which a car drove into a crowd.

The general strike was called to express anger over President Jair Bolsonaro's plans to change the country's pension laws, which the government says is essential if Brazil is to avoid going bankrupt.

Resistance on the streets

Currently, women and men can retire after 30 and 35 years of work respectively, allowing them to quit working as early as 50 and 55.

The reforms also face stiff resistance in the lower house of Congress. Bolsonaro, whose ultra-conservative Social Liberal Party only holds about 10% of seats in the body, presented a slightly watered-down version of the bill on Thursday, but it appeared to make little headway.

Economy Minister Paulo Guedes has threatened to resign if the bill does not pass, saying Brazil could go broke as early as next year if it doesn't.

The pension system has been a major driver of debt, but experts fear the reforms would unfairly burden poor manual laborers who would be forced to work for much longer.

The government says the changes will save the country more than a trillion reales ($260 billion / €232 billion) over the next decade.

Not just angry about pension reforms

Others joined protests in opposition to cuts to Brazil's education system, with professors and students turning out in large numbers.

Though general strikes are rare in Brazil, the last being in 2017 when the government sought to loosen labor laws and cut retirement benefits, there have been many protests against Bolsonaro.

They started before he took office on January 1, with throngs protesting against his misogynistic and homophobic views, ultra-conservative social agenda and his plans to  expand mining and agriculture at the expense of indigenous peoples.

Bolsonaro fired the last moderate in his administration on Thursday, leaving him, his sons and right-wing writer Olavo de Carvalho running the show.

The president made headlines again on Thursday when he defended Justice Minister Sergio Moro, who was recently accused of colluding with prosecutors to unfairly convict former Brazilian President Inacio Lula da Silva. Moro was a judge at the time of the conviction, which was part of the Operation Car Wash anti-corruption investigation.

Lula's conviction kept him from challenging Bolsonaro for the presidency. Lula led opinion polls ahead of the vote.

Brazil, the largest country in South America, is struggling financially. Its GDP slumped in the first quarter of 2019, inflation hit 5% in April and unemployment is hovering around 13%, with some 30% of 18-24-year-olds out of work.

Friday's strike and protests came at an inopportune moment for the populist president. The Copa America soccer tournament is set to start Friday evening, and Bolsonaro is scheduled to attend the opening game between Brazil and Bolivia in the Morumbi Stadium in Sao Paulo.

The election of Jair Bolsonaro as the new Brazilian president has many wondering what the right-wing firebrand could do for Brazil's economy. Stocks are up and many observers hopeful — but the devil is in the details. (27.10.2018)