Protesters demanded the former president's release and spoke out against the current right-wing government. Lula has insisted that his imprisonment was "unjust" and designed to keep him from returning to office. 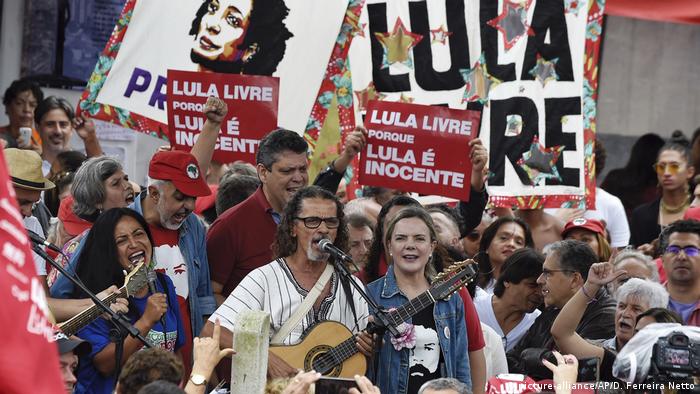 Several thousand people gathered Sunday outside the prison where former Brazilian president Luiz Inacio Lula da Silva is being held to protest for his release.

The protest took place in Curitiba on the anniversary of the former leader's conviction and imprisonment. Demonstrators began the rally at a bus station two kilometers (1.2 miles) before making their way to the prison, which is in the same building as the headquarters of the Federal Police.

Organizers said some 10,000 people attended the protest. Military police however put the figure at 3,000 to 5,000. Similar rallies were held in other cities, including Sao Paulo and Belo Horizonte.

"The case against him is groundless, in our view. So we will continue to demonstrate and fight for his rights," he said.

In a letter read out by Workers' Party President Gleisi Hoffmann, Lula said his imprisonment was "unjust" and designed to keep him from returning to the presidency.

"They never presented a shred of evidence against me. I am a political prisoner, in exile inside my own country," Lula said.

The former president, who governed from 2003 to 2010, was convicted of corruption and money laundering for his role the massive "Lava Jato" (car wash) corruption scandal that has rocked Brazil and implicated politicians in more than 10 other Latin American countries.

Lula is currently serving a 12-year sentence. If additional charges against him are confirmed, he could spend a further 12 years in prison.

Michel Temer has been arrested in Brazil's ongoing Operation Car Wash corruption investigation. Temer is the target of a number of corruption inquiries. (21.03.2019)

Brazil's president has arrived for a four-day visit to Israel during which he is expected to sign "many agreements." The far-right leader's trip comes just ahead of Israel's closely contested elections. (31.03.2019)