Brazilians have protested against controversial presidential candidate Jair Bolsonaro. The country is deeply polarized ahead of October elections. 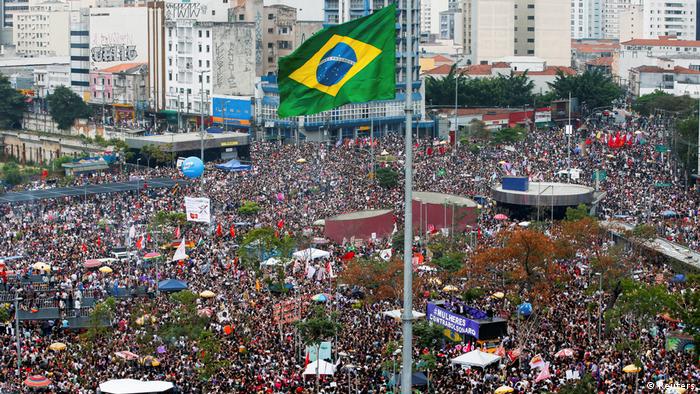 Thousands of Brazilians took to the streets in women-led protests on Saturday against right-wing presidential front-runner Jair Bolsonaro.

Under the banner "Not him," protesters came out in dozens of cities including Sao Paulo and Rio de Janeiro to voice opposition to the former army officer who they view as racist, homophobic and misogynist.

Brazil enters the final stretch before the October 7 election deeply polarized, with Bolsonaro polling around 28 percent. He also has the highest rejection rate among candidates and is unpopular with the vast majority of women.

"I could never be friends with someone who supports a person [like Bolsonaro], who is racist, homophobic and a misogynist," said Tassia Casseli, who was at the Sao Paulo march. 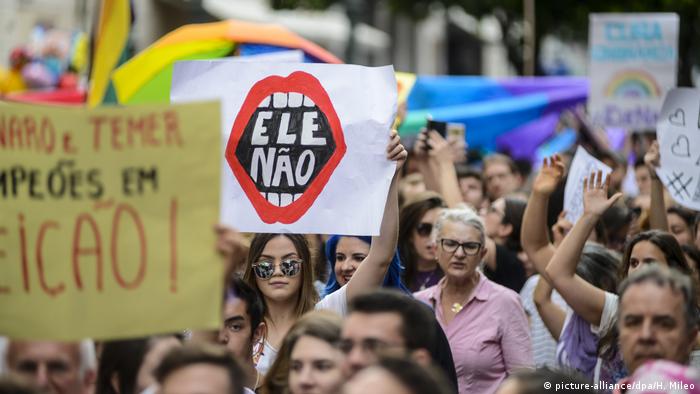 However, Bolsonaro has also gained support for his hardline stance on rampant crime, straightforward rhetoric and a relatively corruption-free career in politics.

Bolsonaro's detractors worry he could deal a blow to Brazilian democracy. He has controversially praised Brazil's 1964-1985 military dictatorship and on Friday suggested he would not accept the election results if he lost.

Bolsonaro, currently serving as a congressman from Rio de Janeiro, almost died this month when he was stabbed by a left-wing radical and has been unable to campaign since. On Saturday, he was discharged from the hospital.

Haddad became the candidate for the Workers' Party after former President Luiz Inacio Lula da Silva was barred from running due to a corruption conviction.

The polarization of Brazil comes as the country faces a recession, major corruption scandals that have hit the political class and a contentious impeachment process ousted former-President Dilma Rousseff.

Brazil's President Temer has signed a decree that will send troops to Roraima state on the Venezuela border. Homicides have jumped in the area and riots have broken out between locals and Venezuelan migrants. (29.08.2018)