The knife attack on populist presidential candidate Jair Messias Bolsonaro continues to inflame an already tense political climate. The victim himself could now benefit most from the incident. 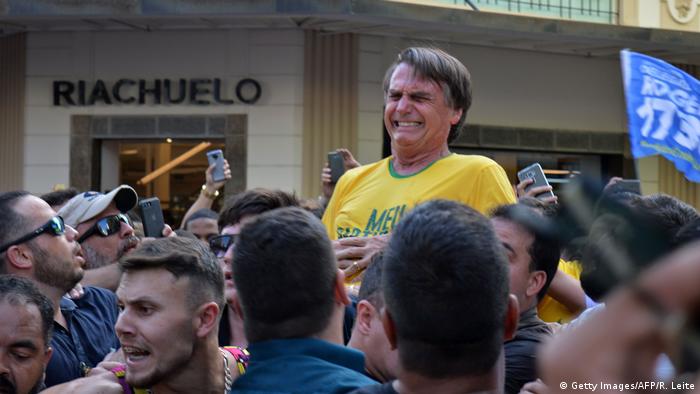 The right-wing populist was stabbed during a rally on Thursday afternoon. The perpetrator's motive is unclear. He was acting "on behalf of God," he told the police. There was speculation on social media about the man's connections to left-wing parties.

The first round of voting will take place on October 7 and a possible run-off on October 28. The race is open. Five candidates are in with a chance. After the assassination attempt, Bolsonaro's have increased.

The former soldier's unfamiliar role as a victim is set to bring even more votes. "It may have secured him a place in the run-off elections," Ricardo Ismael, political scientist at the Catholic University of Rio de Janeiro (PUC-RJ), told DW.

But Bolsonaro's son said his father is unlikely to return to campaigning before the first round vote. Flavio Bolsonaro said in a video posted on Facebook that his father was in a "delicate situation and has trouble speaking" and "probably will not be able to get back in the streets in this campaign."

But Lula has been in prison since April on charges of corruption and money laundering, and his candidacy has been barred by the judiciary. It is currently unclear when Lula will officially transfer his candidacy to his deputy, Fernando Haddad.

So far, Lula and the PT have been the main targets of Bolsonaro's harsh verbal attacks. During a recent campaign event, he called on his supporters to "shoot down" PT politicians. He blames Lula and the PT for the rampant corruption and violence in the country.

Bolsonaro has promised to deregulate firearms for self-protection and to reward police officers who kill a particularly large number of "bandits." His opponents have decried the strategy as poisoning the political process.

Politically-motivated violence is indeed on the increase. In March, the popular Afro-Brazilian politician Marielle Franco, was shot dead in Rio de Janeiro. Shortly afterwards the Lula campaign bus was fired upon in southern Brazil.

At the time, Bolsonaro accused PT of staging the attack: Accusations he now has to face himself. Speculation surfaced on social media that he simulated the knife attack in order to secure an advantage in the election campaign. However, these allegations quickly ceased in view of the seriousness of the injury.

Nevertheless, Ricardo Ismael believes that the assassination attempt will increase Bolsonaro's chances. He was already considered a "mito" (a "myth") among his supporters, and now the role of victim has been added.

"The Bolsonaro voters discourse is that he was to be murdered so that he would not become president," said Ismael. "Among the voters who have not yet been decided, he is likely to have gained sympathy and votes through the assassination attempt."

Ismael feels this could prove a breakthrough for Bolsonaro. He has been clearly leading in the polls since Lula's departure from the race. However, 44 percent of potential voters said they would not vote for him under any circumstances.

"In a possible run-off he will have a huge problem with that," Ismael told DW. Polls have predicted that Bolsonaro will lose in the run-off, no matter who he faces. "What has happened now, however, will increase his ratings." Jair Bolsonaro has been dubbed the "Brazilian Donald Trump"

Who will reach the runoff?

While Bolsonaro's chances of participating in the run-off have increased, it is completely open who his opponent could be. Votes that would have gone to Lula, could be decisive.

Center-left candidate Ciro Gomes (PDT) seems to have benefited most according to the latest polls. Former Environment Minister Marina Silva (REDE), neck-and-neck with Gomes, stagnated recently. This is a sign that she is not benefitting from Lula's exclusion, according to Ismael.

Meanwhile, the assassination attempt has created a problem Geraldo Alckmin from the center-right party, PSDB. Alckmin and Bolsonaro are competing directly for support from the conservative and right-wing electorate.

"So far, Alckmin has focused his attacks on Bolsonaro," said Ismael. "But can he continue to attack a candidate who is in hospital? That could backfire."

Lula's deputy, Fernando Haddad, is in a critical situation. Hardly anyone knows him, especially in the northeast where Lula's strongholds lie. "He urgently needs to start winning over Lula's voters in the northeast," said Ismael.

Bolsonaro's supporters have been almost euphoric on social media. Now their "myth" can no longer be stopped, they have written. Bolsonaro's son, Flavio, is also confident of victory. "A message to the bandits: You have just elected the president, and he is going to win in the first ballot."