The dramatic stabbing of firebrand right-wing politician Jair Bolsonaro was caught on video and shared on social media. The politician survived, but was seriously injured and underwent surgery. 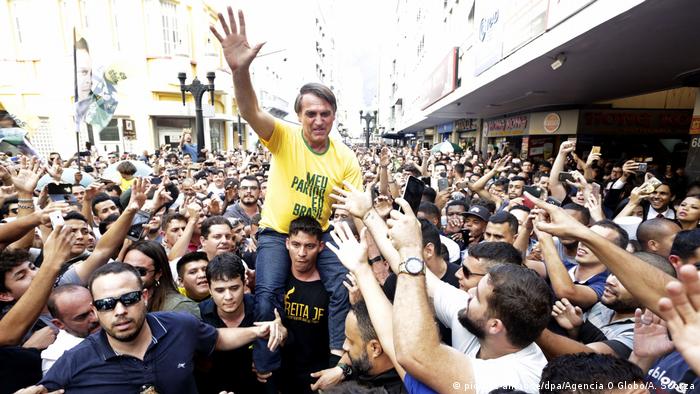 Jair Bolsonaro, a far-right candidate in Brazil's upcoming presidential election, suffered a knife attack on Thursday, during a campaign rally in the southern city of Juiz de Fora.

A video circulated on Twitter, published by major Brazillian newspapers, showed the moment when an unidentified individual stabbed the politician in the lower abdomen. The attack ocurred as the candidate was moving slowly through a large crowd.

A second video, from a different angle, showed the stabbing and then the suspect attempting to flee, but unable to get through the crowd, which then grabbed and held him.

His son, Flavio Bolsonaro, took to Twitter to confirm that the politician had been stabbed. The elder Bolsonaro was hurried away from the crowd and taken to a local hospital, where he went into surgery.

A third video on Twitter showed the politician still alive, being carried into a vehicle.

The candidate's son wrote an emotional message on twitter, updating his followers on the status of his father. "He lost a lot of blood, arrived at the hospital ... almost dead. He appears to have stabilized now. Please pray!"

In a press conference at the hospital, a surgeon said Bolsonaro suffered injuries to an abdominal vein, the colon and the large intestine. The operation was successful and the candidate was stable, but in a serious condition, he added.

Local media reported that Bolsonaro is expected to remain in the hospital for at least a week and that full recovery could take up to a month.

Police spokesman Flavio Santiago told the Associated Press (AP) that the attacker had been arrested and was identified as Adelio Bispo de Oliveira. Santiago said the suspect was badly beaten by Bolsonaro supporters after the stabbing.

Luis Boudens, president of the National Federation of Federal Police, told AP that the assailant appeared to be deranged.

"Our agents there said the attacker was 'on a mission from God,'" Boudens said.

"Their impression is that they were not dealing with a mentally stable person," he added.

Brazil's president Michel Temer said the attack was a "sad episode" and spoke out against intolerance in Brazilian society. He hoped that the event would serve as "an example to understand that tolerance is a part of democracy."

Environmentalist candidate Marina Silva called for an investigation into the attack. "In this difficult moment that our country is going through, we must rigorously safeguard human life and the defense of our institutions and democratic life," she said.

Ciro Gomes, labor candidate, showed solidarity to his political opponent and repudiated "violence as political language." Both Silva and Gomes currently trail Bolsonaro in the polls with 12 percent each.

Expected to win first round

Brazil's upcoming presidential election on October 7 is set to be one of the most unpredictable votes in the country's history, with one third of voters still undecided. Bolsonaro is running on law-and-order and anti-corruption platforms.

He has been critical of Brazil's political elites, many of which have been involved in corruption probes. This has earned him the moniker of "Brazilian Donald Trump."

The former army captain surged in the polls this week and became the frontrunner with 22 percent of the vote share, just after jailed former president Luiz Inacio Lula da Silva was barred from running. Lula appealed the electoral court decision that denied his candidacy, but on Thursday, Brazil's Supreme Court rejected it, effectively putting an end to the former president's hopes.

Bolsonaro, like Lula da Silva, is revered by some but despised by others, reflecting the stark political polarization currently gripping the South American nation.

Jair Messias Bolsonaro, a far-right candidate and congressman, has launched an improbable campaign to win Brazil's presidency. He served in the military under the dictatorship and has hounded left-wing lawmakers since. (15.08.2018)