Brazil's electoral court has voted to bar ex-president Lula da Silva from running in October's election. Lula was considered the front-runner, despite currently serving a 12-year prison sentence for fraud. 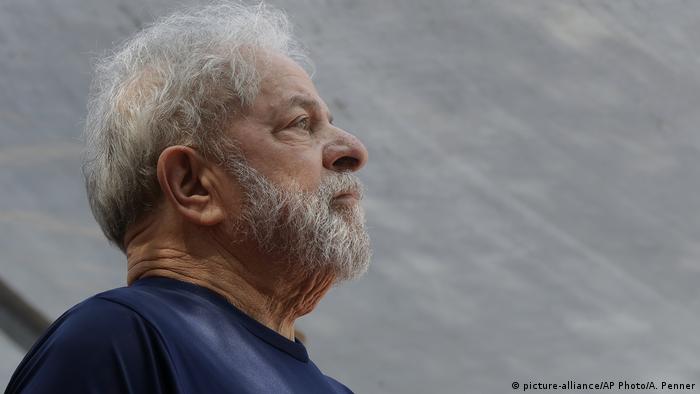 Brazil's former president Luiz Inacio Lula da Silva saw his hopes of a renewed leadership bid all but ended on Friday, after a majority of judges on the country's electoral court found he was ineligible to run.

After several hours of debate, six of the court's seven justices voted to annul the imprisoned leftist's candidacy.

Lula is currently serving a 12-year prison sentence for graft and money laundering. Under Brazilian law, Lula was deemed unable to run for the presidency after his conviction was upheld on an initial appeal.

"What is at stake here today is the equality of all citizens before the law and the Constitution," judge Og Fernandes said as he cast his vote declaring Lula ineligible.

Lula's left-wing Workers' Party (PT) nevertheless registered him as its presidential candidate for the October 7 vote, given his seemingly unbridled popularity among supporters. He launched his candidacy in mid-August from prison.

The former leader's attorneys still hope to get the ban overturned by appealing the decision before Brazil's supreme court. PT officials also vowed to "fight with all means" to secure Lula's candidacy.

Once the favorite, now disqualified

The latest polls actually showed Lula enjoying a sizable lead over his rival candidates, claiming around 39 percent of voter support. His closest contender is the far-right former general Jair Bolsonaro on 19 percent. "We will present all appeals before the courts for the recognition of the rights of Lula provided by law and international treaties ratified by Brazil," the party said in a statement.

PT has 10 days to swap the candidate names on the ticket, according to Friday's court ruling. Lula's vice presidential running mate and former Sao Paulo mayor Fernando Haddad is the favorite to take over the ballot.

Lula was wildly popular during his years in office between 2003 and 2010. However, the former leader became ensnared in a sprawling corruption investigation targeting several of Brazil's leading lawmakers and top business figures. He was convicted in April after being found guilty of trading favors to construction conglomerate Grupo OAS in exchange for the promise of a beachfront apartment.

However, with PT struggling to regain lost voters, the party had little choice but to resort to the ever-popular Lula. The ex-president's most faithful supporters have also maintained his innocence.

It was billed as a sign of social democratic solidarity in times of rising right-wing populism: The former leader of Germany's SPD has paid a surprise, and controversial, visit to Brazil's jailed ex-President Lula. (31.08.2018)

Despite being in jail, former President Lula remains Brazil's most influential — and divisive — politician. DW's Rio columnist spoke to opponents and supporters and found a country split irreconcilably down the middle. (11.06.2018)

A presidential election is just two months away, and some fear President Jair Bolsonaro's utterances mean he might not accept the result if he loses.