The arrest of more than 1,000 people is just the beginning of major police operations to come, police say. The operation targeted men responsible for murders and violence against women. 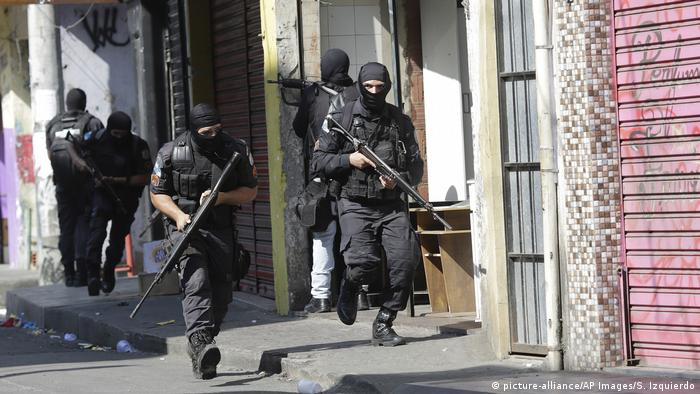 More than 1,000 people were arrested across Brazil on Friday in a major police operation that authorities said focused on murders and violence against women.

About 6,600 police officers participated in "Operation Cronos" across 16 states, leading to the arrest of 157 men for crimes against women, according to the Public Security Ministry. Fourteen of those arrests were for femicide, or the killing of females because of their gender.

"What matters to us is the protection and guarantee of life, above all to combat femicide, that cowardly and unacceptable crime," said Public Security Minister Raul Jungmann.  "Some crimes are more serious and repugnant, especially those against women."

Among the 1,027 arrests, 225 were for homicide, 224 on drug trafficking charges and another 421 for "diverse offenses." Seventy five minors were also taken into custody.

Planning for the operation had been in the works since July.

Jungmann said authorities planned to carry out similar nation-wide operations targeting criminals and men who engage in violence against women.

How to stop violence against women

Part of the investigations that led to the prison terms were supported by a data bank that contains the DNA of perpetrators of sexual and homicide crimes. According to the Public Security Ministry, the data bank will have 130,000 genetic profiles by the end of 2019.

Brazil has one of the highest murder rates in the world, driven by drug gangs and criminal groups. To stem violence in Rio de Janeiro, President Michel Temer has handed control of security over to the military.

Spiraling violent crime and deaths at the hands of police have undermined public trust in the government ahead of elections in October.

Brazil's army has been given command of police by the president in the violence-wracked state of Rio de Janeiro. Human rights groups expressed concern about unacceptable killings. (20.08.2018)

The contest shocked viewers as the contestants read out data on crimes against women in Peru instead of their measurements. Miss Peru Romina Lozano has said she will use the platform to condemn violence against women. (02.11.2017)