The contest shocked viewers as the contestants read out data on crimes against women in Peru instead of their measurements. Miss Peru Romina Lozano has said she will use the platform to condemn violence against women. 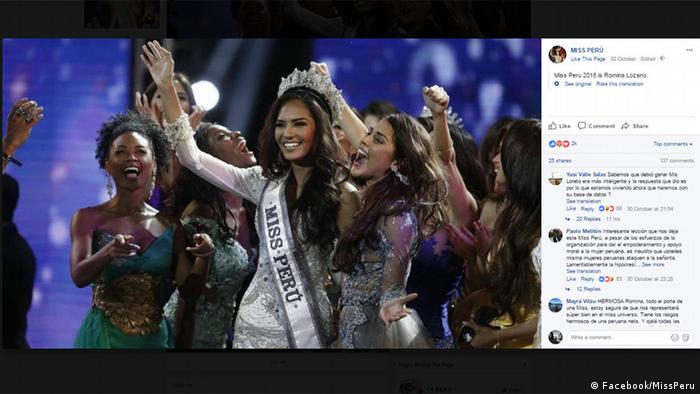 Miss Peru promised to be an advocate for female sexual abuse victims on Wednesday after the pageant that crowned her took the unexpected step of highlighting sexual violence.

"I took the crown to help women who have no voice, now I am their voice. We must not allow ourselves to be defeated for anything," 20-year-old Romina Lozano told news outlet El Comercio.

Lozano also said she has been sexually harassed by men on the street.

During the event on Sunday, the contest surprised viewers across Peru when the 23 contestants read out hate crime statistics instead of the usual declaration of the bust, waist and hip measurements.

"My measurements are…2,202 cases of reported femicide in the last nine years in my country," said Camila Canicoba.

"My measurements are…that one girl dies every ten minutes as a result of sexual exploitation," Samantha Batallanos of Lima added.

"More than 70 percent of women in our country have experienced street harassment," Juana Acevedo told the crowd.

The other contestants shared data on domestic violence and sexual assault. The protest inspired women on social media to share similar statistics under the umbrella of #MisMediasSon or "my measurements are," although some also used the hashtag to voice complaints that beauty pageants are inherently sexist.

"We wanted to show the big problem that we have and that, I hope, we can eliminate some day," Lozano said.

Reports of sexual harassment in the European Parliament have alarmed lawmakers. Members of all the body's parliamentary groups have called for more effective prosecution of perpetrators and more protection for victims. (25.10.2017)