Students and teachers have taken to the streets in more than half of Brazil's states to protest deep cuts in funding for public education. The government ordered soldiers to guard the Education Ministry in the capital. 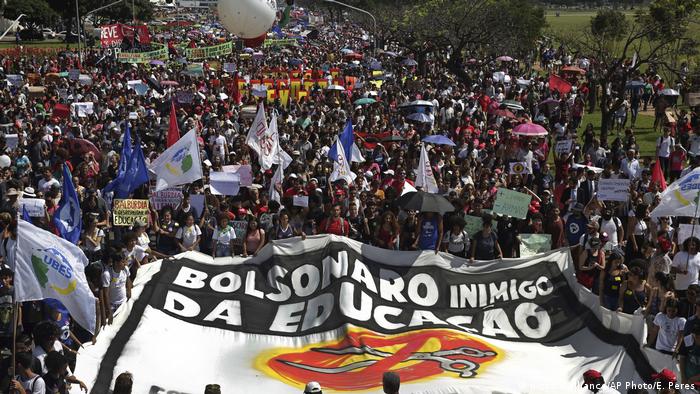 Tens of thousands of students and teachers from across Brazil have demonstrated in "defense of education" after spending freezes were announced by the government of far-right President Jair Bolsonaro.

Classes at universities and colleges were suspended in Sao Paulo, Rio de Janeiro, Brasilia and 17 of the country's 27 states on Wednesday, local media reported. Government soldiers were seen guarding the Education Ministry in the capital, Brasilia.

Protesters said Education Minister Abraham Weintraub's decision to cut federal university subsidies by 30% would undermine the ability of universities to fulfill their mandate.

The Education Ministry also announced last week that it would suspend scholarship payments to postgraduate students in the sciences.

"Secondary school pupils, university students, researchers, teachers and other education employees will take to the streets in every state," the National Student Union (UNE) said ahead of the demonstrations.

Bolsonaro, who was attending an event in Dallas, Texas, called the protesters "useful idiots, imbeciles, who are being used as the maneuvering mass of a clever little minority who make up the nucleus of many federal universities in Brazil."

Bolsonaro fired Weintraub's predecessor, Ricardo Velez, in April after he vowed to stamp out "cultural Marxism" and gender-identity "ideology."