Brazil prosecution of Lula could be compromised, Intercept leaks show

The Brazilian Bar Association has called for the suspension of the justice minister and several prosecutors. In messages, Sergio Moro, in his previous role as a judge, appears to conspire against former President Lula. 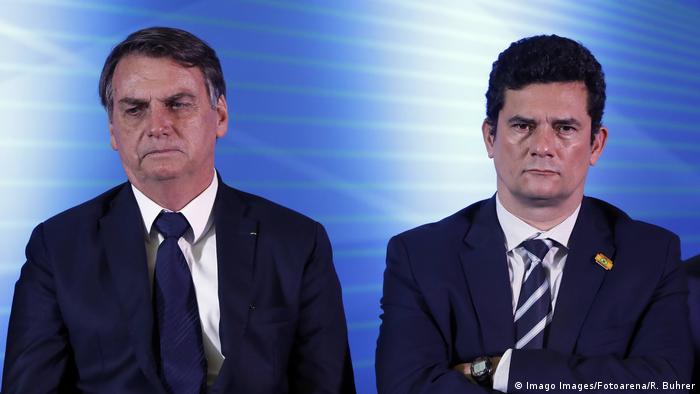 Brazil's top legal regulatory board on Monday recommended the suspension of all federal prosecutors involved in the case against former President Luiz Inacio Lula da Silva after the first in a massive series of leaks were published.

The online newsmagazine The Intercept on Sunday published Telegram messages between Sergio Moro — at the time a judge and now the justice minister under nationalist President Jair Bolsonaro — and the task force that for five years has investigated Operation Car Wash, the corruption scandal that ensnared Brazilian politicians from all parties.

The Brazilian Bar Association recommended the suspensions "so that the investigation can run without any suspicions."

Lula was imprisoned in April 2018 and eventually banned from running for president again in October's election — a race that opinion polls had indicated he would win over Bolsonaro. Moro, who oversaw the investigation as a judge, now serves as Bolsonaro's "super justice minister."

Run by Glenn Greenwald, the American investigative journalist who in 2014 published Edward Snowden's explosive leaks on the US National Security Agency's widespread spying, The Intercept has been unrelenting in its criticism of Bolsonaro's exclusionary policies. On Sunday, it published leaks it said showed:

Moro has denied any wrongdoing. "There is no orientation in those messages," he told reporters on Monday. He added that he couldn't confirm the veracity of the published messages because he had not saved them.

Bolsonaro's spokesman, Octavio Rego Barros, told reporters that the president planned to meet with Moro on Tuesday to discuss the leaked messages. On Sunday, the federal prosecutor's office confirmed that prosecutors involved in the Operation Car Wash investigation had had their phones hacked, but did not address the accuracy of the messages as reported. On Monday, the office acknowledged that hackers had cloned the mobile phones of federal prosecutors since at least April.

In a statement released late Sunday, Moro said he "lamented" that The Intercept's stories had used an anonymous source. He called the reports "sensationalist," saying the messages didn't represent any abnormality or show that he had directed or coordinated with prosecutors.

Andrew Fishman, managing editor of The Intercept Brasil, told the news agency Reuters in a statement that over the years Moro and prosecutors insisted they had not collaborated, but "the reporting shows that their private actions contradict their own public statements at the time."

Joao Paulo de Martinelli, a criminal lawyer and professor at the Institute of Public Law of Sao Paulo, said the messages could open a path for lawyers to petition the Supreme Court to throw out Lula's conviction. "If these messages are proven to be true, there was partiality from the judge in Lula's conviction," he said. "A judge driving the prosecution is a grave violation of the constitution and of human rights."

Lula has always professed his innocence and contended that prosecutors had targeted him for political reasons. In a written statement, Lula's legal team cited the leak as proof of what his lawyers have argued in court: that Moro and federal prosecutors teamed up to ensure a quick guilty verdict and block the former president from running in the 2018 election.