Brazil and US strengthen ties, free trade in the pipeline

Brazilian Foreign Minister Ernesto Araujo has said the two countries are closer than ever and that a free trade agreement is imminent. Mike Pompeo is equally effusive about relations between the two nations. 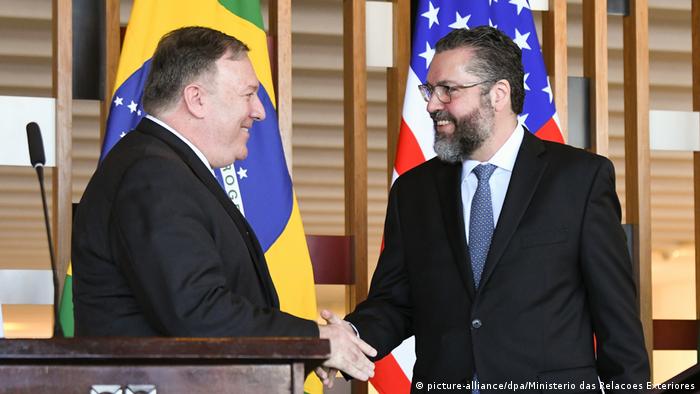 Relations between the United States and Brazil appeared to be at an all-time high after Brazilian Foreign Minister Ernesto Araujo described the level of engagement between both countries as "without precedent."

And his US counterpart, Mike Pompeo, complimented the administration of Brazilian President Jair Bolsonaro for supporting Israel and pressing for democratic change in Venezuela.

"Together, we are seizing the opportunity to cement a future of security, prosperity and democracy for our people and for the entire hemisphere," Pompeo said.

Araujo said that he plans to tell officials attending the upcoming UN General Assembly that fires in the Amazon region have received more attention because of the "ideology of the Brazilian government."

"Some people say we are anti-science. It is the opposite. We are for science. We want the issues to be treated in a constructive manner," he said.

The three-day trip to Washington was Araujo's sixth US visit this year, and he said a potential free trade deal had been discussed with US Trade Representative Robert Lighthizer and Commerce Secretary Wilbur Ross.

"There is no specific timeline but we want it soon," the minister said.

The bilateral love-in represents a shift in relations between the two countries and comes just six months after President Donald Trump hosted Bolsonaro at the White House.

Araujo also confirmed that he expects that visit to be reciprocated in the near future after he delivered an invitation from Bolsonaro for Trump to visit Brazil.