Biden in Geneva for tense summit with Putin

The US president, fresh from G7, NATO and EU summits, will meet his Russian counterpart in Switzerland for face-to-face talks. Despite tensions, the US and Russia say they want more "stable" bilateral relations. 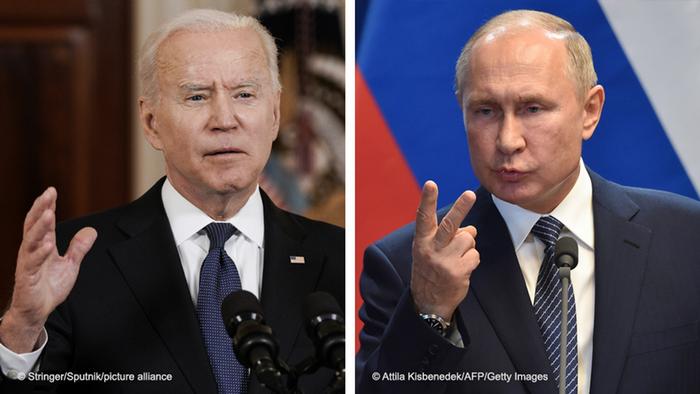 How will Biden fare in his first face-to-face meeting with Putin?

United States President Joe Biden landed in Geneva, Switzerland, on Tuesday ahead of talks with Russian President Vladimir Putin. Biden is arriving after a series of intense meetings with international allies from the G7, NATO and the European Union.

Biden has sought to reassure allies shunned by his predecessor, Donald Trump, that the US is indeed a strong and reliable partner. Part of this has been a concerted US effort to confer with allies about concerns over Russia before Biden's meeting with Putin on Wednesday.

Heading into the summit, Biden has pointed to the backing of his western partners. Among other things, the US and EU agreed to set up "high-level dialogue" on Russia as part of "a renewed trans-Atlantic partnership'' between the US and the 27-member bloc.

At the NATO summit in Brussels on Monday, experts warned that Russian troop buildups at the edge of eastern Europe "increasingly threaten the security of the Euro-Atlantic area and contribute to instability along NATO borders and beyond."

Biden said, "I'm not looking for conflict with Russia, but ... we will respond if Russia continues its harmful activities."

Expectations are low for the two leaders' sit-down, the first since Biden took office in January. Both sides say their aim is to establish more stable and predictable bilateral relations at a time when they are anything but.

When asked if he was ready for his meeting with Putin, an upbeat Biden said with a smile, "I'm always ready." Still, a senior Biden official told reporters aboard Air Force One on condition of anonymity that the team was "not expecting a big set of deliverables."

"There will be no breaking of bread," the official said.

However, the official added that the US hopes to establish "red lines" to prevent the frayed relationship between the US and Russia from further deteriorating. 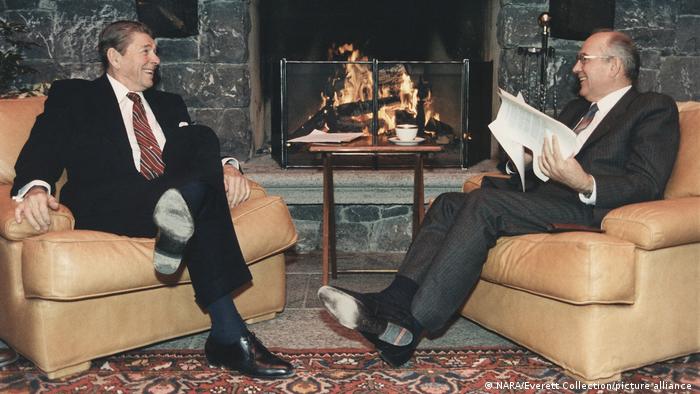 Looks can be deceiving, Reagan and Gorbachev smiled for the cameras but their first summit in Geneva was contentious

What do we know about the summit?

Biden and Putin are expected to meet for several hours on Wednesday at La Grange, an elegant villa complex in Geneva — the setting is reminiscent of the 1985 Cold War summit between Ronald Reagan and Mikhail Gorbachev at the villa Fleur d'Eau.

This time, however, tensions are coming less from strategic nuclear arsenals or the struggle of competing ideologies.

Rather, the Biden administration sees today's Russia as an increasingly rogue, authoritarian state.

Officials from both sides say Biden and Putin will initially meet alone, with only translators and US Secretary of State Antony Blinken and Russian Foreign Minister Sergey Lavrov present.

Afterwards, meetings will change to an expanded format, with five officials accompanying each president. Talks are scheduled to begin around 1:00 p.m. (1100 UTC) and last as long as five hours.

Unlike the 2018 Helsinki summit between Putin and Donald Trump, there will be no joint press conference.

What are sore points in US-Russia relations?

In an interview with US broadcaster NBC ahead of the meeting, Putin brushed off US accusations of harboring cybercriminals, orchestrating interference into US elections and the poisoning and imprisonment of his political enemies — such as Alexei Navalny.

Observers see both men as having a sense of pragmatism when it comes to resolving their differences.

DW spoke with Andrey Kortunov, director general of the Kremlin-founded Russian International Affairs Council (RIAC), and David O'Sullivan, former EU ambassador to the US, for an assessment of what Putin and Biden might each want from the meeting.

Speaking of Putin, Andrey Kortunov said: "I think that he also wants predictability and stability. He understands that relations between Russia and the United States will continue to be mostly adversarial, at least for the foreseeable future. But at the same time, there are some potential pockets of cooperation that can be pursued further. And even the confrontation can and should be managed, to reduce costs and to cut down the risks."

"I think President Biden is a very shrewd politician," said David O'Sullivan. "He knows the Russians well. I think he will be very charming. He will be very open but firm on the points which are important for him. But he will reach out to Putin and say, 'look, we don't agree on everything. Let's find a way of coexisting and not creating excessive tensions for each other.'"

What are the major issues on the agenda?

The list of crises that Biden and Putin have to address is long — ranging from cyberattacks, human rights, prisoners, Ukraine, Belarus and Syria, to controlling the world's two largest nuclear arsenals. However, despite differences of opinion and individual red lines, there are also areas of overlapping interest.

One possible starting point would be to return bilateral diplomatic representation to Moscow and Washington, where offices have been abandoned since Russia recalled Ambassador to the US Anatoly Antonov in March after Biden called Putin a "killer" on national television, and US Ambassador to Russia John Sullivan returned to Washington for "consultations" in April.

US Council on Foreign Relations senior fellow Chris Kupchan told DW that the meeting will "be a way of saying, 'hey, we looked into the brink, our relationship was on a slippery slope downward, let's see if we can't do better.'"

Kupchan added that the two leaders are "not coming in looking for a bromance like Trump and Putin," but Biden could "invest in some kind of working relationship with Putin."

"Biden is much more worried about China than he is about Russia. And I'm guessing that Putin is growing quietly uncomfortable with China. So part of this conversation might be about trying to improve the Western relationship with Russia in a way that contains China's leverage and gives Moscow a little bit of breathing room in its relationship with Beijing," said Kupchan.