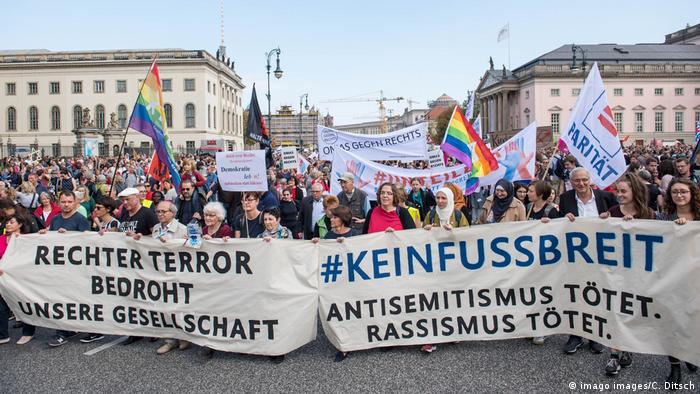 More than 10,000 people marched in Berlin on Sunday in a demonstration in support of the victims of anti-Semitic violence in the city of Halleearlier this week.

They made their way from Bebelplatz, significant as a site of Nazi book-burning, to the New Synagogue — originally completed in 1866 but not fully refurbished from its destruction in World War II until after the fall of the Berlin Wall.

While many anti-right wing demonstrations tend to have a lively atmosphere, DW's William Glucroft described the scene on Sunday as a "solemn affair, in light of the victims of Wednesday's anti-Semitic attack in Halle that left two dead and two wounded."

Those gathered marched quietly, many with rainbow and Israeli flags, carrying banners with slogans such as "racism kills."

Similar demonstrations also took place across Germany, including in the cities of Hamburg and Marburg, in western Germany.

On Wednesday, 27-year-old Stephan B.* tried to storm a synagogue in Halle, southwest of Berlin, where the local Jewish community was marking Yom Kippur — the holiest day of the year in Judaism.

Unable to access the synagogue because of its reinforced and barricaded doors, he shot at passersby, killing two people and injuring two more. Police caught him about an hour-and-a-half later, as he attempted to flee in a stolen taxi.

Interior Minister Horst Seehofer earned the ire of many young Germans on Sunday when he blamed the "gamer scene" for fostering extremism.

On social media, many of them mocked Seehofer's seemingly out-of-touch comment, reminding the interior minister that millions of people around the world play video games. One tweet showed a photoshopped image of Adolf Hitler with virtual reality goggles, saying "this young man was also radicalized in the gamer scene."