Riot police detained hundreds of protesters who were taking part in a rally in the Belarusian capital Minsk on Saturday, demanding an end to President Alexander Lukashenko's rule.

Around 2,000 people — most of them women — were attending the anti-government "Sparkly March," wearing shiny accessories and carrying red-and-white flags of the protest movement.

Former Soviet republic Belarus has been rocked by mass anti-government protests since Lukashenko claimed a landslide victory in a presidential election on August 9.

Belarusian police officers have violently repressed protests and detainees have accused security forces of carrying out systematic beatings and torture. 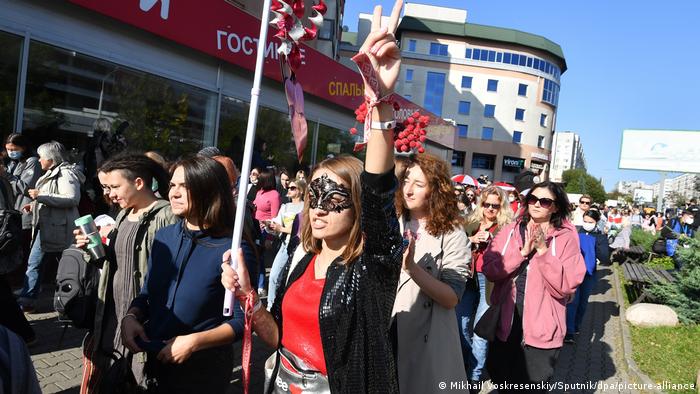 Around 2,000 women turned out to protest President Alexander Lukashenko in capital Minsk

What happened at the Sparkly March?

The protesters briefly scuffled with police who then blocked their path and started picking people one by one out of the crowd, news agency Reuters reported citing a witness.

Some women stood with linked hands as police began taking people out of the crowd. Some shouted "shame" as police forced protesters into vans, reported the German Press Agency.

Among those detained Saturday was Nina Baginskaya, a 73-year-old activist who has become one of the best-known faces of the protest movement. Police released her outside a police station shortly after.

Ambulances were called after several women became unwell during the detentions.

Women were also encouraged to demonstrate in other cities.

In a statement released ahead of the march, opposition leader Sviatlana Tsikhanouskaya, who has taken refuge in Lithuania, praised the "brave women of Belarus."

"They are marching despite being constantly menaced and put under pressure," she said. 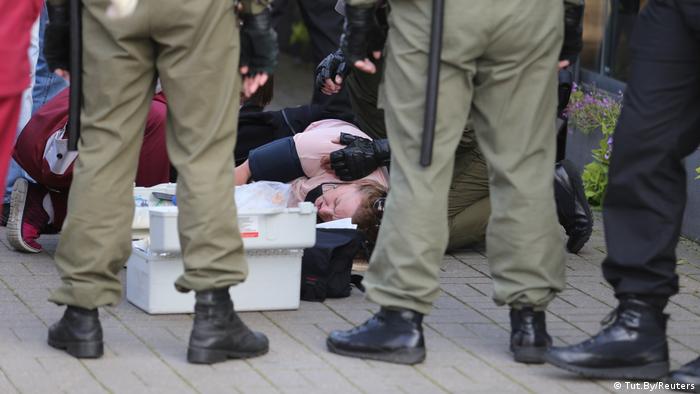 Ambulances were called for some protesters who required medical treatment

'In the authorities' interest' to crack down

DW correspondent Nick Connolly, reporting from Minsk, said: "The symbolism of these protests really did encourage people to come out. Women were there with other women and their children showing that being engaged in political activity doesn't have to be scary. It is safe."

However, authorities had warned protesters that they could face up to 14 days in prison for taking part.

"There are also, increasingly, threats towards people's children, authorities hinting that if you are arrested for this kind of activity then social services might come round and take your child into a children's home," Connolly said.

Journalists were also being detained at the protest, he later tweeted.

Women lead the way in Belarus

More than 100 women were detained at a similar rally last week, during a violent clampdown on protestors by masked police. Demonstrators, under the banner "March of Female Solidarity," made it through several streets before police intervened.

In mid-August, hundreds of women formed human chains across the capital, dressed in white.

In addition to Tsikhanouskaya and Baginskaya, other prominent opposition voices include the women Veronika Tsepkalo and Maria Kolesnikova.