Coronavirus lockdowns keep bees at home and put crops at risk | Environment | All topics from climate change to conservation | DW | 20.05.2020 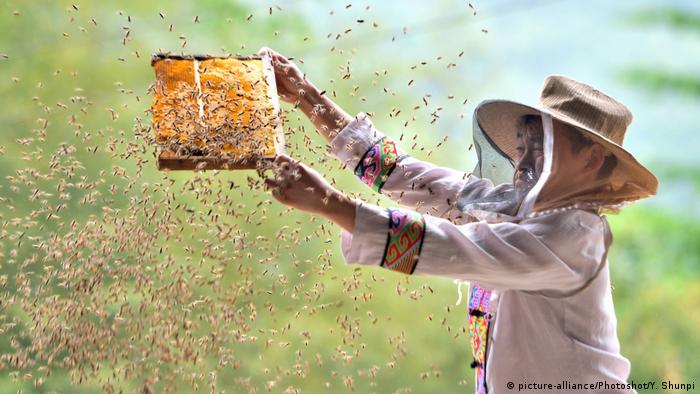 Coronavirus lockdowns that keep farmers from fields and suppliers from markets are restricting another cornerstone of the agriculture industry: bees.

Responsible for pollinating about a third of the plants we eat, bees are in short supply and their numbers declining globally. In large, food-exporting countries like the US and China, there are too few local bees to pollinate crops — so beekeepers truck hives thousands of kilometers to pollinate fields.

Now, travel restrictions to halt the spread of the coronavirus are hurting the pollination industry by keeping bees at home. They are also stopping some beekeepers from feeding their hives, grounding flights that could import bees from abroad, and making it harder to hire seasonal workers to transport them, said Etienne Bruneau of Apimondia, the international federation of beekeepers. Some farmers "arrive in the [pollinating] season without bees and nobody to help them."

In the US, which is the world's biggest agricultural exporter but has fewer beehives than Spain, farmers rely on bees trucked long distances on pallets and forklifted into fields. California grows more than 3 in 4 of the world's almonds and each spring about two-thirds of the country's bee population is mobilized to pollinate them. The bees are then loaded onto trucks and sent elsewhere to fields of cherries, apples, blueberries, cranberries, pumpkins and other foods.

Pollination services contribute $15-20 billion (€13.7- €18.3 billion) to the value of US crop production and, for many beekeepers, it is more lucrative than making honey. When bees gather nectar, pollen sticks to their bodies and rubs off onto other plants they land on. Harvest losses without their help can range from 5-10% for grains like rapeseed to as high as 80% for almonds and cherries, said Bruneau. 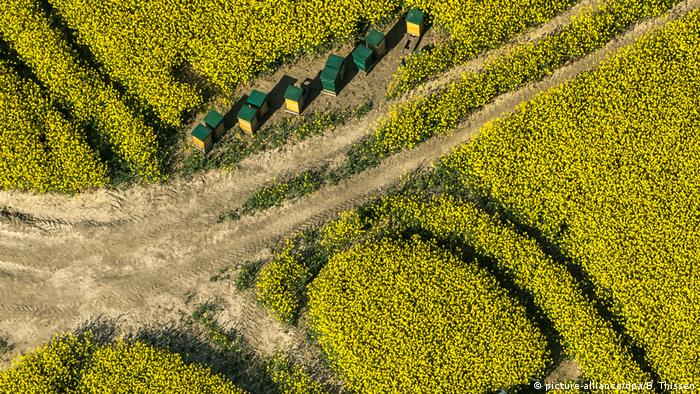 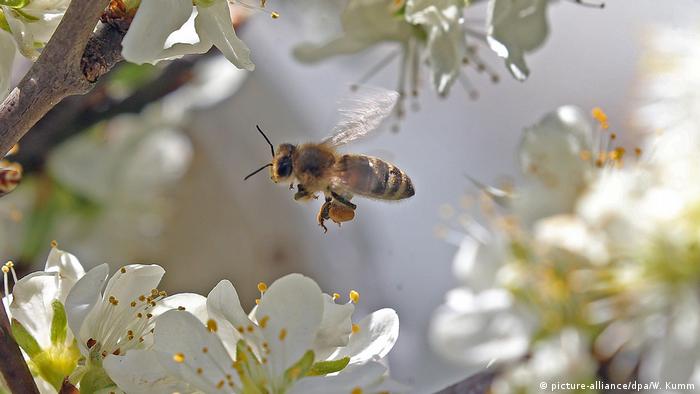 Bees, together with pollinators like bats and birds, underpin the global food system. But their populations are dwindling and colonies collapsing as a result of human activity like building settlements, overusing pesticides, farming with monocultures and changing the climate through greenhouse gas emissions. A UN-backed assessment of life on earth last year found that pollinator loss threatens $235-$577 billion in annual crop output.

While experts say the food security risk from restrictions to bee movements is small, it represents yet another coronavirus-induced shock to a global food system already reeling from the pandemic. The World Food Programme warned last month that COVID-19 could double the number of people facing acute hunger — currently estimated at 135 million people — by the end of 2020.

Climate change, conflict and poverty have worked together to drive food crises.

Across East Africa, the Middle East and South Asia, swarms of locusts have ravaged vegetation after a year of weather extremes that included abnormally heavy rains and strong cyclones. While African bees have not been greatly affected by lockdowns — unlike in North America and Asia, beekeepers typically use fixed hives and do not move them large distances — pesticides to fight locusts have, in turn, hurt pollination, said David Mukomana, Apimondia's Africa president.

"Many [farmers] resorted to aerial sprays that had serious effects on many pollinating insects, bees included."

Meanwhile, across Asia and South America, food security is particularly threatened by a growing dependence on pollinators, according to a study published in the journal Global Change Biology last year. Areas that are more biologically diverse encourage pollination, researchers say, but countries are farming in ways that hurt biodiversity.

What's more, the increase in pollinator dependency has not been matched by a rise in managed honeybees, the authors wrote, adding that this was an "alarm call" for pollinator-friendly farming methods such as targeted use of insecticide and planting hedgerows next to crops.

"The picture is worse for wild pollinators that are in decline in several regions," the authors wrote. 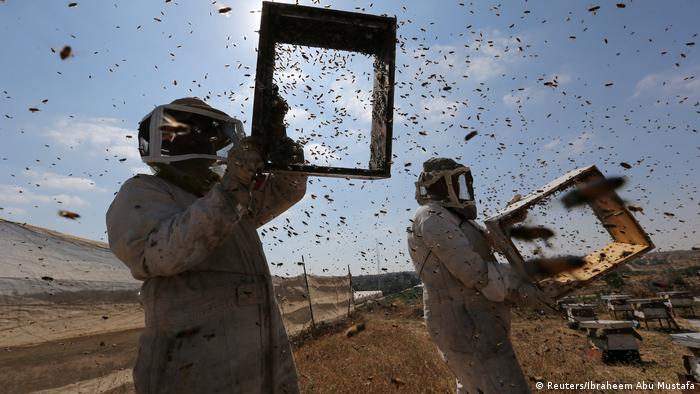 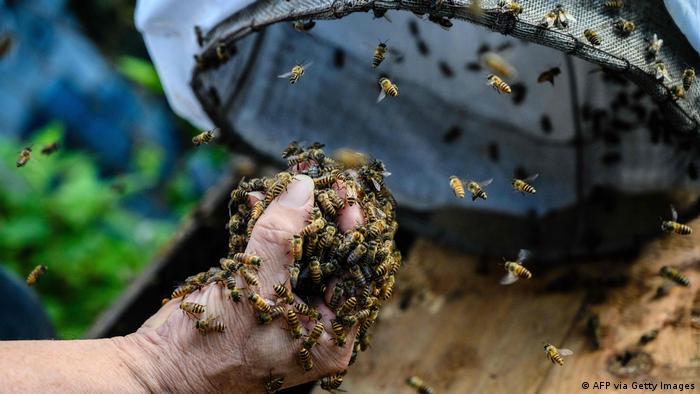 Both managed and wild bees are struggling to meet pollination demand

Even as lockdowns keep industrial bees grounded, wild bees may benefit from a drop in pollution and traffic as humans stay at home. A study published in the Journal of Insect Conservation in 2015 estimated that billions of pollinating insects were killed on roads each year in North America alone. A global fall in transport may have kept some bees safe.

Yet despite these short-term benefits, "lockdown will do virtually nothing to reverse the major causes of bumblebee declines, which are habitat loss and degradation," a spokesperson from the Bumblebee Conservation Trust said.

Bees also have their own viruses to deal with. Like people, honeybees live in large groups and thrive on social interactions.

"That poses risks when it comes to pathogen transmissions," said Adam Dolezal, an insect scientist at the University of Illinois. "If a pathogen evolves that can circumvent those risks, the bees have to respond or become more infected." 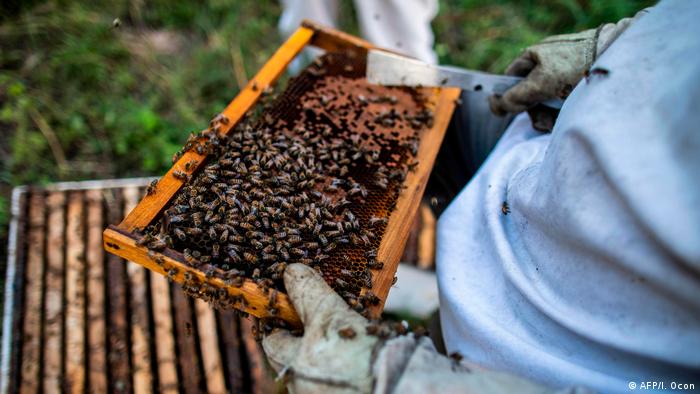 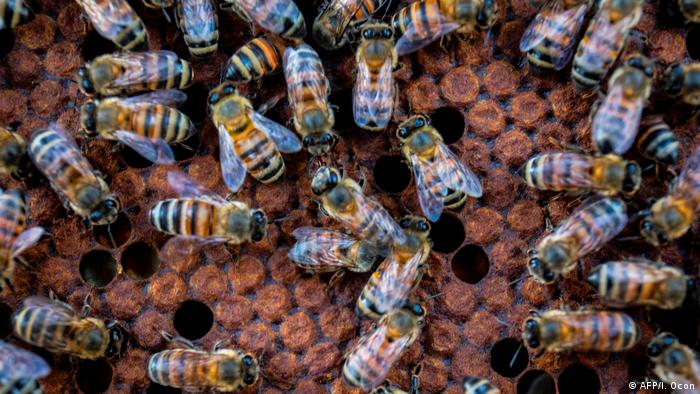 Bees live in dense hives where viruses can easily spread

Honeybees may be in an "evolutionary arms race" with the deadly Israeli acute paralysis virus, according to a study published in the journal PNAS last month. While bees are known to socially distance from infected nest mates and touch each other less, the virus has evolved a way of sneaking sick bees past guards of other colonies and spreading itself into new hives.

In the wild, where beehives are sparsely spread and there is little interaction between colonies, this evolutionary trait offers little advantage. But in industrial farms — with up to thousands of bees per square kilometer — it gives viruses a greater chance of starting new outbreaks.

It suggests that intensive agriculture can increase the danger of pathogens that target insects, as well as humans and other animals. Modern farming practices have come under scrutiny since the outbreak of the coronavirus pandemic as scientists have sounded alarm bells about the dangers of habitat destruction and zoonotic diseases.

This doesn't mean we should stop keeping bees this way, but it does show how manipulating natural environments can give advantages to viruses, said Dolezal, who co-authored the study. "We should be on the lookout for places where pathogens can find chinks in the armor of the organism."