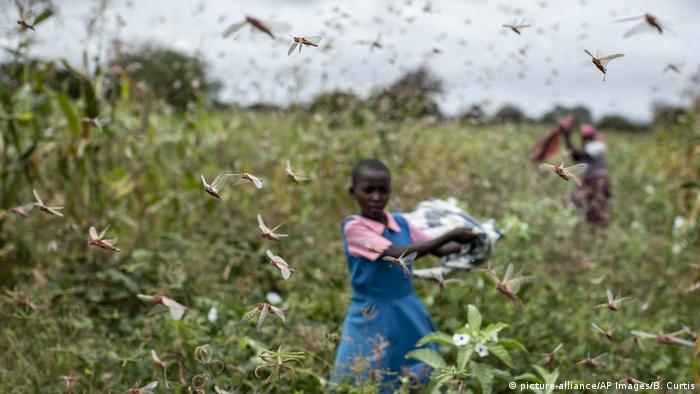 But last week, a plague of locusts descended on his farm and destroyed most of his livelihood.

"The swarm landed around evening and we didn't know how to tackle it," said Maalim, who grows tomatoes, chilies, mangoes and watermelons on a large farm in Garissa County, Kenya. "In the morning it was like a desert. You couldn't imagine it's a farm."

The locusts gutted millet and other crops that Maalim had planted to replace those lost to weeks-long floods in December. Eating up any greenery in their path, they left a trail of destruction that the UN's Food and Agriculture Organization (FAO) has described as the worst in Kenya in 70 years.

Left unchecked, locust swarms tearing across East Africa could grow to 500 times their current size and create an "unprecedented" threat to the region's food security, the FAO says.

"These things never used to be there, it's not normal," said Maalim, who has been farming for 15 years and has no insurance. "We cannot quantify the losses but it's like we're starting from scratch." 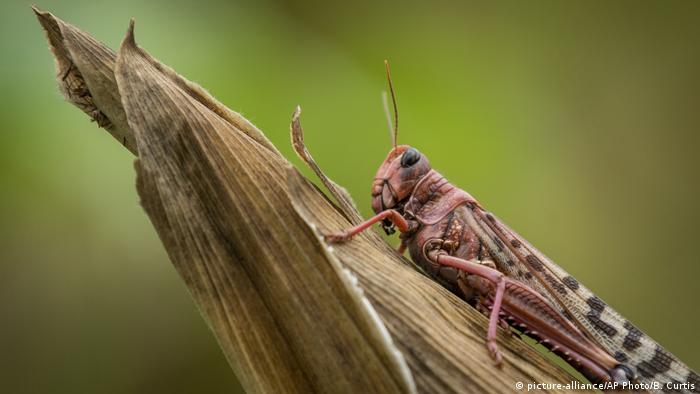 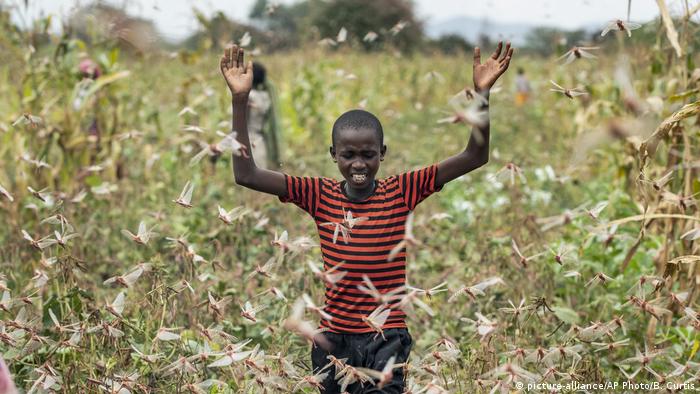 From Somalia to DRC, Sudan to Tanzania, heavy rain has fallen across East Africa since October, bringing severe floods that have displaced millions and encouraged locust growth. It is part of a pattern of near-apocalyptic weather events turning lives upside down across the world.

Across the Indian Ocean, in Australia, wildfires raging since September have laid waste to an area larger than Portugal, killing at least 30 people and an estimated one billion animals. The smoke has choked citizens and rained ash down on cities, reaching even as far as South America.

While East Africans and Australians have long been familiar with flash floods and wildfires respectively, few were expecting their recent severity. 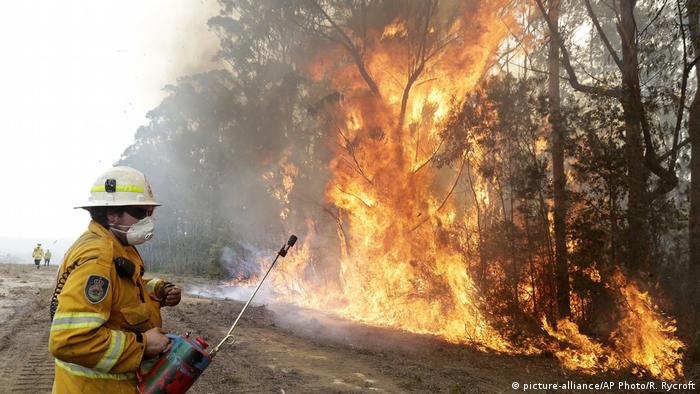 Australia's wildfires have been made worse by climate change

What's more, the weather in both regions is driven by the same climate phenomenon: the Indian Ocean Dipole (IOD), a surface temperature difference in the Indian Ocean. In its positive state, where waters closest to Africa are warmer than those near Australia, warm moist air blows westwards, which can bring rain to East Africa and drought to Australia. Last year the IOD saw one of its strongest positive states on record.

"One of the main drivers of this stronger state is climate change," said Abubakr Salih Babiker, a Sudanese climate scientist at the Intergovernmental Authority on Development.

About 93% of the heat generated from global warming has been absorbed by the oceans, and the western part of the Indian Ocean heated faster than any other part of the tropical oceans, a study published in the Journal of Climate found in 2014. 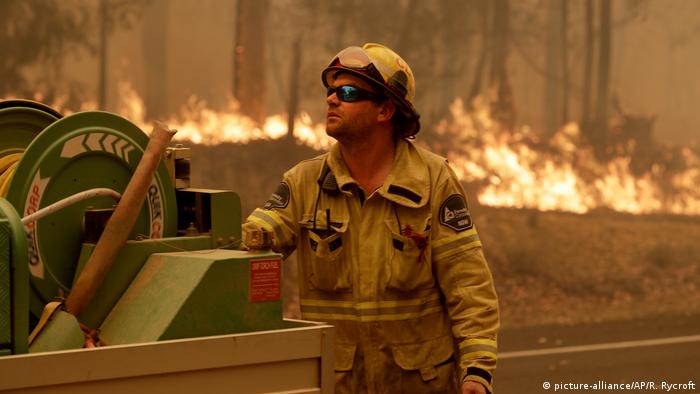 In Australia, which in 2019 experienced its hottest and driest year on record, the lack of moisture in plants and trees meant fires spread, unchecked, over vast areas of land at speeds faster than humans can run. In East Africa, heavy rain increased the amount of vegetation that swarms could feed on and moistened soil, improving breeding conditions for locusts, which avoid laying eggs in dry soil.

Unchecked locust plagues, which can take years to control at a cost of up to hundreds of millions of dollars, threaten hunger, particularly in regions struggling with food security.

A 2400 square kilometer (930 square mile) swarm was measured in Kenya in January, according to the FAO, which is large enough to consume as much food in a single day as 85 million people. Put another way, the FAO says a swarm the size of Bamako, Niamey or Paris chews through as much in a day as half the population of Mali, Niger and France, respectively.

"The locusts are eating the trees, the grass. It is affecting the lives of not only humans, but animals also," said Ahmed Abdi Bakal, a regional coordinator for the Red Crescent in Somaliland, where many people are nomadic and their prosperity tied to livestock. "If some action is not taken immediately, animals will die."

Rich in protein and considered a delicacy in many countries, locusts are sometimes eaten in the aftermath of swarms, once crops have been destroyed and livestock starved. "Funnily enough, we are not eating them [here]," said Maalim, the farmer in Kenya. "Some communities eat locusts, but not in this part." 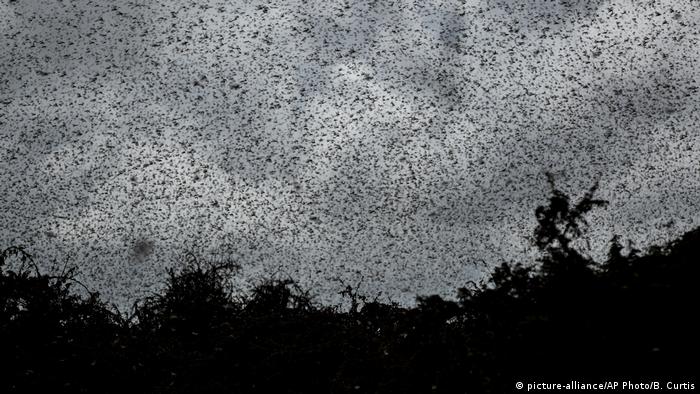 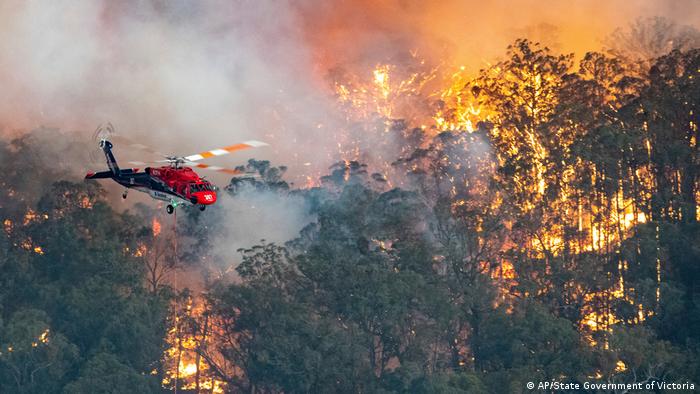 Scientists project East Africa's locust swarms and Australia's wildfires will continue over coming months. In the long-term, extreme weather events such as heatwaves, droughts and floods are set to become stronger without sharp cuts to greenhouse gas emissions.

There are early signs that extreme weather in these regions may further public understanding of climate change.

A survey in January from the Australia Institute, a research group, found that 79% of Australians are concerned about climate change, up 5 percentage points from last summer. Two-thirds of Australians say the "current bushfires demonstrate the cost of climate inaction".

A pan-Africa survey published by polling agency Afrobarometer last year found that, while 40% of Africans have not heard of climate change, among those who have, two-thirds say it is making life in their country worse. In East Africa this rises to 89%. The region has been particularly hit hard by tropical cyclones and climate extremes.

"We started with drought, we ended the year issuing reports on floods," said Babiker, the climate scientist. "In one year we have seen the most extreme cases. With more climate change, more of these types of extreme conditions are more likely to prevail."