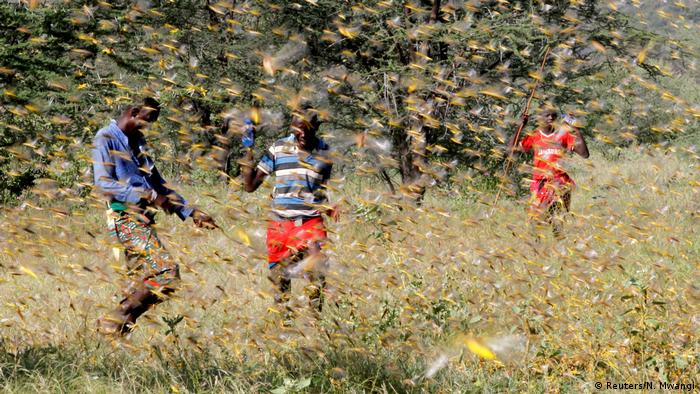 Thick clouds of locusts are blackening the skies of East Africa from Ethiopia and Somalia into Kenya due to extreme weather changes.

Experts warned Friday that the insect infestation could have disastrous effects on a region still recovering from recent drought and aggressive flooding.

The United Nations Food and Agriculture Organization (FAO) estimated that one locust invasion in Kenya covered around 2,400 square kilometers (930 square miles) and contained up to 200 billion locusts which descend to feed off plants and vegetation.

People in Kenya have been seen shooting in the air, waving sticks, banging cans and running around trying to chase the locusts away, according to the Associated Press news agency.

For Ethiopia and Somalia, the infestation is the biggest in 25 years, and for Kenya it is the greatest swarm in 70 years, according to the FAO.

A locust consumes their own weight in food every day. Farmers face frustration as vegetation for their livestock is consumed by the ravenous locusts. Many were just slowly recovering from three years of drought, a process which usually takes up to five years.

The FAO warned that the insects could "reproduce rapidly and, if left unchecked, their current numbers could grow 500 times by June,'' spreading to Uganda and South Uganda. In an already vulnerable region with high levels of poverty, the locusts can further devastate crops, resulting in "a major food security problem", said Guleid Artan of the Climate Prediction and Applications Centre at a press conference in Nairobi.

The locusts, he warned, were the latest symptom of extreme weather conditions that also saw a 2019 drought end in one of the wettest rainy seasons in four decades in parts of East Africa, with mass floods killing hundreds. The year 2019 witnessed eight cyclones, the most in a single year since 1976.

From East Africa to Australia

Artan attributed the weather crisis in East Africa to a warmer western Indian Ocean —  a climate condition referred to as the Indian Ocean Dipole which has conversely led to extreme drought in Australia.

"We know East Africa is one of the most vulnerable to climate change. We know this region will see more extremes," Artan said.

If the locusts are not controlled by the beginning of the next planting and rainy season around March, herders could see more crops devastated.

How will African megacities adapt to climate change?