From Bangladesh to Germany: How political refugee built a new life in Düren | Germany | News and in-depth reporting from Berlin and beyond | DW | 31.08.2020

From Bangladesh to Germany: How political refugee built a new life in Düren

Bangladesh is his motherland, Germany his fatherland. After receiving death threats, former blogger Mahmudul Haque Munshi tells DW how he overcame death threats and his deepest fears and started a new life in Germany. 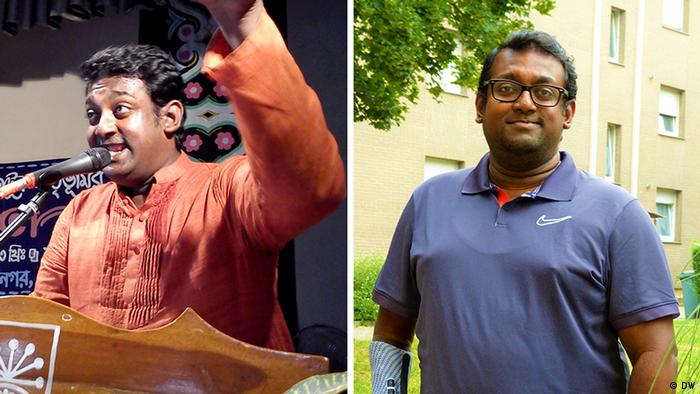 The fingers are made of black plastic and they hum like a bee. At the touch of a button, they wrap themselves around a glass of freshly squeezed orange juice. Mahmudul Haque Munshi smiles and looks in awe at his new right hand. "I've only had the prosthetic hand for a week," he says. "I'm still getting used to it."

A childhood injury left him without the use of his right hand. But his new one is part of the new life that Mahmudul Haque Munshi, known as Munshi, has been building for himself in Germany for the last five years. It is a far cry from his old life as an activist and blogger.

Before he fled to Germany in November 2015 he headed up the Shahbag protest movement and its 5 million supporters in his native Bangladesh. His Blogger Online Activist Network, which he used to organize protests, comprised some 500,000 users.

The movement demanded that those convicted of war crimes committed during Bangladesh's War of Independence in 1971 get capital punishment, a sentence that the tribunal handed to another man accused of such crimes.

Back then, Bangladesh, officially called East Pakistan, was fighting for independence from what is now Pakistan. Some 3 million people were killed.

Today, the former political activist has been recognized as a political refugee and now lives with his family in the town of Düren, near Cologne, on the banks of the river Rhine. He and his wife Rupali Khatun have set up an online retail business. When this year is up, he will be entitled to permanent residency in Germany.

"Everyone has to have a solid plan in Germany," says Munshi and grins. He himself has several plans: to earn money, learn a new profession, help other refugees and become a German citizen. 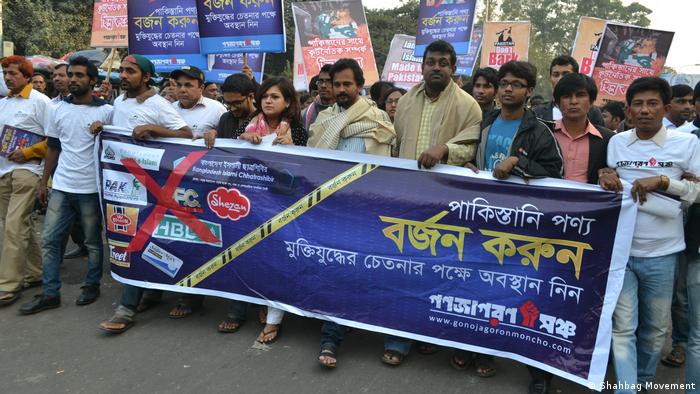 More than 200 events per year: Leader Munshi (c) at a rally of the Shahbag Movement 2013 in Dhaka

Sneakers for the rich

While his wife Rupali continues to build up their online retail business, Munshi is doing an internship at a web design company and is hoping to retrain as a computer specialist for app development or system integration.

He got the idea for the online retail business during a visit to the Nike Clearance Store in nearby Kerpen. "There are no exclusive Nike Stores in Bangladesh but demand is high," explains Munshi. So he and his wife sell the luxury goods they buy in Kerpen to people in Bangladesh, via Facebook.

Of course, there are shops in Dhaka, a mega-city of 9 million people, that sell products made by the big sports manufacturers. But the more well-heeled customers seem to prefer studying what's on offer on the internet.

"I have no problem earning money from rich people in Bangladesh," says Munshi. He says he dreams of a bigger apartment. His reasoning might sound strange to many of his poorer compatriots: "My son has so much stuff. He needs his own room."

Nirban Munshi, who is 18 months old, is the apple of his father's eye. He is also another symbol of Munshi's new life; far away from protests and mass demonstrations. And, above all, far from the bombings and other attacks on adherents of the Shahbag Movement. Its leaders were on the death lists of Islamists in Bangladesh, who decried them as atheists.

"My wife and I could never have started a family in Bangladesh, we could have been killed at any time," says Munshi. His escape to Germany did not put an end to the death threats. In the early days, he received more than 4,500 death threats via Facebook. 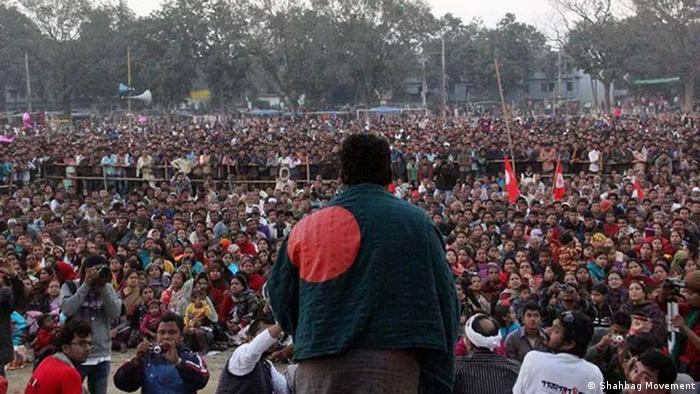 Munshi, standing center, has led mass demonstrations as part of the Shahbag Movement in Dhaka

When he arrived at a holding center in the western town of Detmold in November 2015, some of his own compatriots threatened him. "They all knew me. They could have murdered me in my sleep because you couldn‘t lock the doors. I had a panic attack and I had to be brought to the hospital."

From refugee to helper

With the help of the Heinrich-Böll-Stiftung, a foundation with close ties to the Greens, and the refugee aid organization Atheist Refugee Relief, he managed to find a rented apartment for himself and his wife in Düren. His son, Nirban, was born in January 2019.

In the meantime, Munshi has become a volunteer for Atheist Refugee Relief. In May this year, he was elected to the board of the aid organization in Cologne. He accompanies refugees with insufficient knowledge of German to the job center or tries to help them find accommodation.

Club members, businesspeople and proud parents, Munshi and his wife Rupali have made themselves a new home in Germany. The blogger has his own way of putting it: "Bangladesh is my motherland because I was born and raised there. Germany is like a father for me, because it gives me security and support."

The neglected 'Bihari' community in Bangladesh

People wait hours for food, elephants invade the camp and a wedding is celebrated. These are stories from the Rohingya camp in Kutupalong in Bangladesh. DW Akademie trains Rohingya refugees to work as camp reporters.