A man in Germany felt so besieged by a rodent that he called the police emergency number. The baby squirrel has been taken to an animal sanctuary. 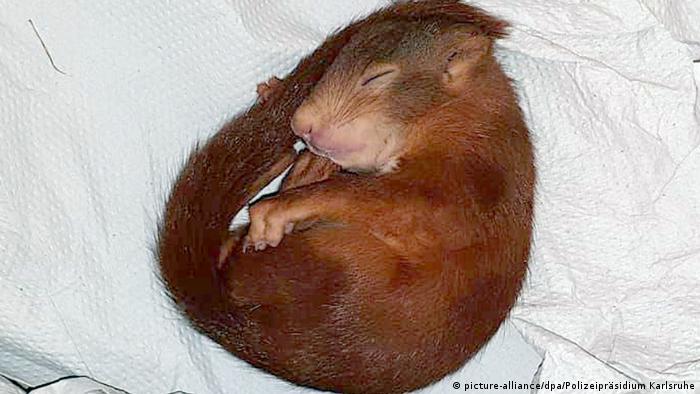 A man called Germany's police emergency number after being "terrorized" by a baby squirrel, police in the southwestern city of Karlsruhe said on Friday.

The squirrel so relentlessly chased the man that he felt he needed the police to help deal with the situation.

Officers dutifully responded and sent a patrol car to help.

The situation eventually resolved itself when the baby squirrel fell asleep. In the official police report officers wrote: "Squirrel will be new mascot, was baptized with the name: Karl-Friedrich." Followed by the message, "The squirrel has fallen asleep because of the shock."

Officers brought Karl-Friedrich — likely named after 18th-century German lawyer Karl Friedrich Eichhorn, whose last name is similar to the German word for squirrel — to the station where they arranged accommodation for the marauding creature. The rodent is now in a sanctuary and is well cared for, according to police.

Baby squirrels sometimes chase people, quite relentlessly, when they are hungry or otherwise in need of help.

In somewhat related squirrel news, a woman called Stuttgart police after seeing a puppy on the train tracks. It turned out to be a baby squirrel. At the end of July police in Bonn were called when someone heard suspicious noises in their basement. It also turned out to be a squirrel, which they nicknamed David Haselnuss (Hazelnut).

Imagine finding a penguin on your verandah or a fox in your backyard! Cities are home to an astonishing diversity of animal species. On World Wildlife Day, we invite you to explore the urban animal kingdom. (21.10.2014)

With the native red squirrel under threat of extinction in Britain by the introduced gray species, new efforts are underway to kill the latter to save the former. Is that possible, and is it fair? (07.11.2017)

Berlin might seem like a concrete desert, but the capital's wildlife is more diverse than you'd think. It's the city with the largest number of birds in Germany. And there's foxes, boars and rabbits roaming the streets. (07.07.2016)

In a case that shocked Germany, a man's head was left outside a court in Bonn and his body was found in a nearby river. Police, however, said he died of natural causes — but issued a warrant for desecration of the dead.