Austria to ban asylum-seekers from taking up apprenticeships

Austria is set to bar asylum-seekers from taking up vacant training spaces while their claims are still being assessed. It marks the latest in a spate of restrictions placed on migrants by the right-wing government. 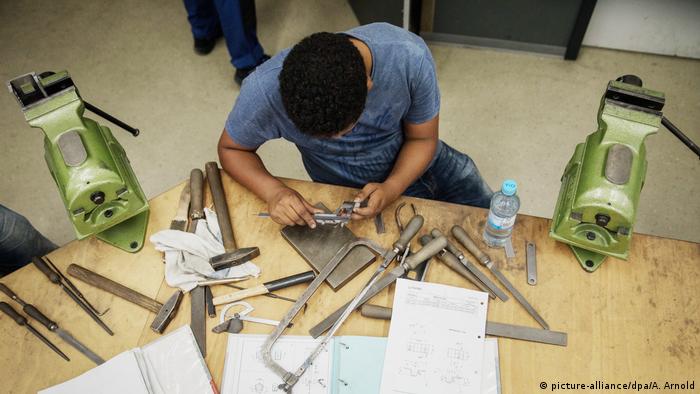 Asylum-seekers in Austria will no longer be able to apply for apprenticeship schemes, as part of a draft regulation presented by the government on Monday.

The legislation actually aims to fill vacant training places and apprenticeships, which will be open to laborers from third countries but not to asylum-seekers whose claims are being assessed, government spokesman Peter Launsky-Tieffenthal said.

The new law would overturn a 2012 policy introduced by the then-government, led by the Social Democrats (SPÖ), aimed at integrating refugees.

Austria's current ruling coalition, made up of Chancellor Christian Kurz's conservative People's Party (ÖVP) and the far-right Freedom Party (FPÖ), was elected last year on an anti-immigration platform. Since then, it has sought to crack down on immigration while also restricting the rights of those already in country.

Kurz's government has already restricted aid for refugees and reduced funding for several integration initiatives, such as German lessons. Interior Minister Herbert Kickl, an FPÖ hard-liner, has also made clear that his ministry has made the expulsion of rejected asylum seekers a priority.

According to government figures, some 8,600 refugees in Austria under the age of 25 are currently seeking work, including some 1,300 who are seeking to enroll in an apprenticeship scheme.

In an interview with Austrian broadcaster Ö1, Economy Minister Margarete Schramböck (ÖVP) said that those asylum-seekers who are taking part in an apprenticeship would be allowed to complete their program. However, that would only benefit the approximately 1,000 migrants currently enrolled. Furthermore, according to the Green party, around half of those could face deportation afterwards.

Christian Kern, the leader of the opposition SPÖ, warned that restricting opportunities for asylum-seekers while opening them up to other foreigners was "misguided, as well as malicious."

The new regulation was only increasing the problems the government claimed to be solving, Kern added.

The United Nations High Commission for Refugees (UNHCR) also spoke out against the Austrian government. "For many young asylum-seekers, this would mean having to sit around idly for years instead of doing something meaningful and learning something in Austria," a spokesman said.

The latest spate of restrictions comes after rights group Amnesty International warned last week that it had encountered "structural problems" in how Austria processes asylum claims.

The group was responding to media reports that an Afghan who identified as gay and said he was persecuted back home was rejected because he did not "act or dress" like a homosexual.

The government hit back, insisting that all officials tasked with assessing asylum claims received the necessary training.