The bill would allow authorities to seize refugees' cash and phones, as well as speed up deportations. The government said the harsher measures were designed to fight illegal migration and asylum abuse. 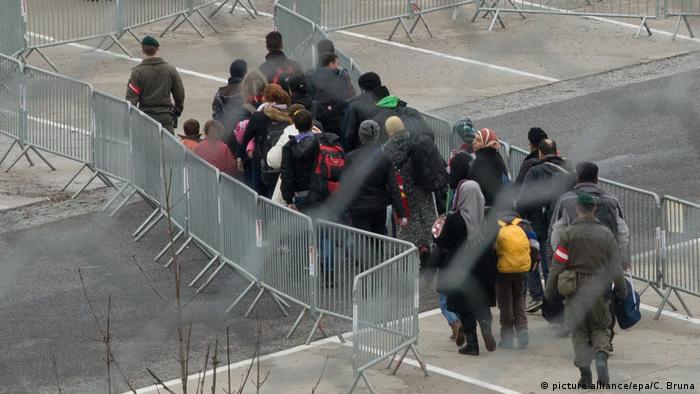 Austria's government on Wednesday proposed harsher asylum measures, including seizing refugees' mobile phones to see where they came from and threatening the deportation of minors who commit crimes.

The measures in the bill were approved by the cabinet, as Chancellor Sebastian Kurz's conservatives and his far-right Freedom Party (FPÖ) coalition partner seek to make good on promises to take a harder line on illegal migration.

"We have very deliberately set ourselves the goal of fighting against illegal migration, and also against the misuse of asylum," Kurz told a news conference.

Among the proposed measures, which still need to be passed through parliament, asylum seekers would have to hand over up to 840 euros ($1,040) to pay for asylum processing.

Asylum seekers would also be made to hand in data devices and mobile phones to check their identity, determine where they came from, and check to see if they have committed any crimes. Those that first arrived in another EU country could be deported back there under the EU's so-called Dublin rules.
Read more: Net migration to Germany sank by half in 2016: statistics office

Interior Minister Herbert Kickl of the FPÖ called it the most "restrictive asylum policy as possible."

Austria received150,000 asylum applications following the migration crisis of 2015, or about 1.7 percent of the population of 8.7 million. Asylum applications have since fallen. Migration was a major theme of last year's election.

Other measures proposed in the bill include making it faster to deport asylum seekers who commit crimes, even if they are minors. The plan envisions sending criminals to detention centers for deportation after they serve prison sentences.

The current six years to become a citizen for those who receive asylum would be raised to ten years.

The bill would also require doctors to notify authorities after an asylum seeker received medical treatment.

Rejected asylum seekers or those facing deportation already face restrictions on their movement, but under the proposed law they would now be restricted to the district where they are living until they are returned to another country.

Germany's interior minister has defended a request to continue checks by accusing the EU of failing to protect its external borders. Germany is one of six countries that reimposed controls in the visa-free Schengen zone. (13.04.2018)

Four people were in a critical condition after two separate knife attacks near Vienna's Nestroyplatz metro station. An Afghan national has confessed to the stabbing, blaming his "rage about his life situation." (08.03.2018)