Australia drifts toward China amid wobbly US ties | Asia | An in-depth look at news from across the continent | DW | 24.03.2017

Chinese premier Li is currently in Australia to strengthen bilateral ties. Both nations see their partnership as primordial to present a unified stance against the protectionist tendencies sprouting up around the world. 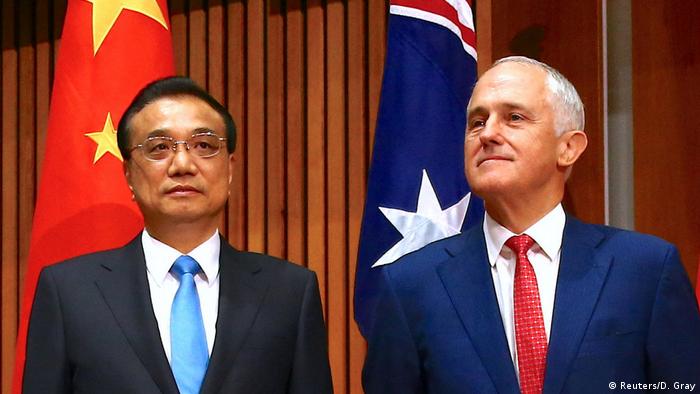 As Chinese Premier Li Keqiang arrives in Canberra this week for a five-day official visit, attention once again turns towards China's ongoing efforts to reinforce a vital bilateral relationship amid growing diplomatic uncertainty in the region.

Australia is only one of the few countries to have officially established a prime-ministerial level dialogue with China, beginning in 2013. Li is the most senior Chinese official to visit Australia since 2014, when President Xi Jinping finalized a major bilateral trade deal.

Accompanying the premier on this trip is a large business delegation, with the ultimate aim of strengthening Chinese-Australian economic ties.

The well-being of Australia's economy is increasingly linked to Chinese investment. China is Australia's largest trading partner, with bilateral trade exceeding $107 billion (99.5 billion euros) and bilateral investment over $100 billion, while Australia is also an important source of resources for a developing China. 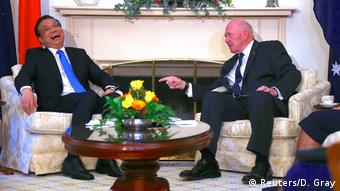 Deputy Director of the Australia-China Relations Institute, Professor James Laurenceson, says the Chinese-Australian economic relationship is mutually beneficial for a number of reasons.

"China is already Australia's biggest overseas customer, buying double the value of goods and services than Japan does in second place," Laurenceson told DW. "China also delivers Australia its biggest trade surplus. For a whole range of sectors, from tourism, education, beef to wine, the rise of China's middle class is the best news on Australia's economic horizon."

"Australia is important to China because it is the key supplier of the iron ore that feeds in Chinese steel production. Australia is also looked upon increasingly as a valuable supplier of high quality and safe food and beverages, and a useful test bed for Chinese companies looking to make their first international foray."

Li's visit to Australia is therefore likely to focus heavily on economic diplomacy and strengthening the existing China-Australia Free Trade Agreement (ChAFTA), which came into force at the end of 2015. The deal has been welcomed by both sides, but there is still work to be done.

"The FTA left some areas untouched, most notably around investment rather than trade," underlined Laurenceson, "I expect we'll see some progress in this area."

US out of the loop

Beijing's move to maintain strong ties with Canberra comes as the international community attempts to contend with US President Donald Trump's erratic presence on the global stage.

In February, China's Foreign Minister Wang Yi visited Australia for talks only days after a well-publicized phone call between Trump and Australia's Prime Minister Malcolm Turnbull, in which the former accused the latter of trying to export "the next Boston bombers" under a previously arranged refugee-resettlement deal between the two countries. 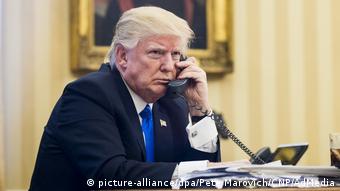 Trump is alleged to have abruptly ended the conversation after telling Turnbull it was "the worst call by far" he had had with a foreign leader. The now-infamous exchange led to strains between the long-term allies, leading to speculation that China would take advantage of the fallout as foreign relations show signs of shifting under the new US administration.

"I am sure China will sense an opportunity to build its profile and influence in the region," said Laurenceson. "It's certainly true that any US withdrawal will mean Australia's national interest will be best served by strengthened ties with other countries, including China."

Following the US' withdrawal from the Trans-Pacific Partnership (TPP), China is using the opportunity to send a clear message that it will continue to support free trade in the region. Australia has also openly expressed interest in a reformulated TPP trade bloc that would see China replace the US as the centerpiece.

"It is clear that China views Trump's win and isolationist tendencies as an opportunity to consolidate its centrality to economic relationships in the region through its own initiatives like the Asian Infrastructure Investment Bank (AIIB), 'One Belt One Road' (OBOR) and the Regional Comprehensive Economic Partnership (RCEP)," Clarke told DW.

"Australia has signaled its interest in each of these initiatives and it will perhaps become more important with Trump's withdrawal from the TPP."

However, Laurenceson says talk of Australia needing to delicately balance its relations with China and the US are overdone. "The reality is that Australia will evaluate its own interests on individual decisions," he said.

"The Australian government supported the South China Sea arbitration decision last June, much to the annoyance of China. But it also joined the Asian Infrastructure Investment Ban and sold an important maritime port in Northern Australia to a Chinese company, much to the annoyance of the US. I expect this pragmatic approach will continue to be the way Australia will relate to China and the US going forward," Laurenceson argued.

Australia may soon find itself in a difficult position however. The incumbent US administration has repeatedly affirmed it would challenge China over the South China Sea conflict if necessary. In the case of an extreme scenario involving a potential clash, Australia may be backed into a corner if the US demands support. 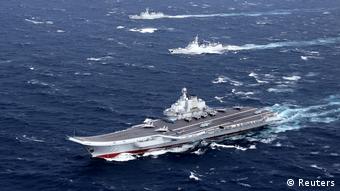 "Clearly, a conflict between China and the US would not remotely be in Australia's national interests so the government continues to emphasize diplomacy at every opportunity," said Laurenceson.

"Australia has a nuanced position on the South China Sea. On the one hand, it supports the right of the US to run so-called Freedom of Navigation patrols within 12 nautical miles of Chinese claimed features, on the other the Australian government has told the US that it will not be joining them. It is the government's view that doing so would only add to tensions."

Clarke believes Australia does have a reason to be concerned over the South China Sea dispute, due to its implications for the region's broader strategic picture.

"The problem, of course, is that as China becomes more assertive in a strategic context, the specter of actually having to choose a side in a potential conflict between the US and China, and all the implications that such a choice will have for Australia, becomes much more visceral for Australian policy-makers and politicians," he underlined.

"China's ability this far to challenge international law and US hegemony through its island building and naval operation in the South China Sea is seen in Australia as damaging to the 'rules based' international order that Australia sees as critical to its national security and prosperity. This leaves Australia in a tricky position," Clarke added.

A new era for the China-Australia partnership?

Potential conflict aside, the relationship between China and Australia is likely to strengthen beyond economic diplomacy over the next decade.

Clarke believes this will be related to the evolution of Sino-US relations under Trump. "This, I think, is the $64 million questions for policy-makers in Canberra, and around the region. How that relationship tracks will likely determine the policy options open for Australia."

Laurenceson says the relationship will become broader to include further cooperation on issues like security. "I expect to see more joint military exercises between Australia and China. People to people contact will continue to grow exponentially."

"A former Australian Prime Minister, Paul Keating, said that Australia needs to find its security in Asia, not from Asia. We are still getting there but the truth of that statement is only going to become more obvious."