The Interior Ministry has said there has been a rise in reported instances of anti-LGBT+-related crime in recent years. Political figures insist more action needs to be taken. 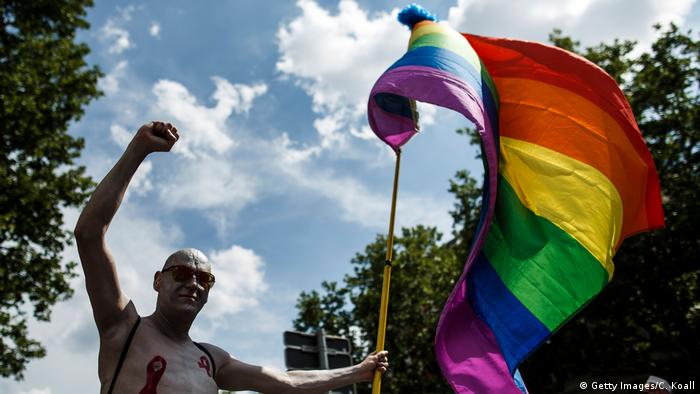 Attacks reported in Germany on those identifying as LGBT+ are on the rise, according to government figures announced on Thursday.

In 2013, police recorded 50 attacks on lesbian, gay, bisexual, transgender and intersex people, the Interior Ministry said. This rose to 94 in 2018.

In the first half of 2019, there have already been 57 crimes of this nature. Including non-violent hate crimes based on sexuality, that figure rises to 245.

The figures are available in German here.

Doris Achelwilm, from Germany's Left party, said the statistics were a reflection of societal problems on a wide range of minority issues. The lawmaker also called on the government to take the situation more seriously.

"The increase in violence is not a coincidence," she said. "It emerges from a social climate that puts minorities under renewed pressure. It is more important than ever before, to strengthen the way which the relevant police authorities deal with hate crime and to offer more in terms of victim protection, violence prevention and raised awareness."

"Terrible incidents like the one in Chemnitz in 2018, where a gay man was tortured and killed by neo-Nazis, shows that this issue is of the utmost importance."

As part of the information garnered, there has also been a sharp increase in anti-LGBT+-motivated property damage in 2019.

The increase in reported violence does not necessarily reflect the real figures.

Not enough being done

Helmut Metzner, the spokesman for the Lesbian and Gay Association (LSVD), said the newly released data represented just a fraction of the hate crimes committed as not all such crimes are reported.

"Effective measures for prevention, recording crimes and prosecution must be introduced," he said. "Facilities for victims must be adequately supported."

Earlier this year Berlin travel guide Spartacus reported that Germany had lost its allure as a destination for gays and lesbians, citing increasing violence against homosexuals.

Falling well behind the UK, Ireland, Malta and Spain, Germany was given a rating of only 2.5%.

The reason, Leander Milbrecht of Spartacus told DW in July, was the "increase in reported crimes against and assaults on lesbians, gays, bisexuals, transgender and queer (LGBTQ) persons."

Only some states in Germany have laws specifically designed to tackle hate crime against LGBT+ people.

It’s the 50th anniversary of the Stonewall uprising. The riots and ensuing protests are credited with spurring the US gay rights movement, but five decades later, those who were there say there's more work to do. (28.06.2019)