Asylum-seekers left in ′inhumane′ conditions in German refugee center | Germany | News and in-depth reporting from Berlin and beyond | DW | 15.05.2019

Inhabitants of Fürstenfeldbruck, a refugee processing center near Munich, told DW of overcrowding, filth and bureaucratic limbo, leading to at least one suicide attempt. Bavarian officials say conditions are adequate. 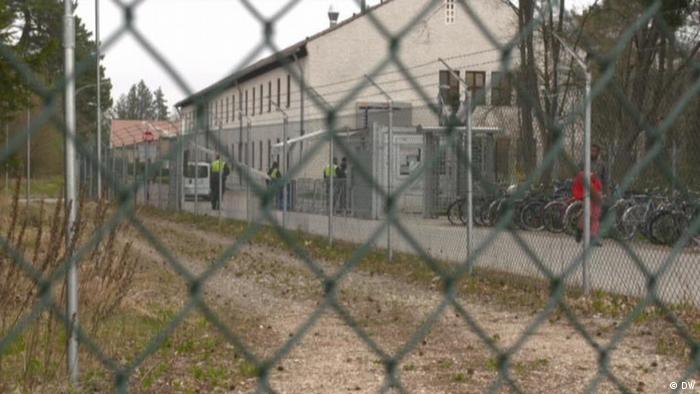 Asylum-seekers at one of Germany's refugee processing centers are spending months living in what they claim are inhumane conditions, struggling to get access to adequate health care while in bureaucratic limbo as they wait for their applications to be processed.

People housed at the Fürstenfeldbruck facility outside Munich spoke anonymously for fear of trouble from camp administrators or obstructions to their asylum applications. They told DW of cramped rooms, filthy toilets, suicide attempts, and frequent canteen fights, all punctuated with apparently random deportation swoops by police.

The inhabitants, mostly from sub-Saharan Africa, also shared videos from inside the camp, which they said they're not allowed to do. The videos showed crowded bedrooms and toilet floors covered with trash and yellow liquid.

Several people DW spoke to said they had lived in the rooms, each of which houses up to eight people, for well over a year. The Bavarian government argues that such cases are mired in court procedures.

Apart from employees and inhabitants, only charity workers and local officials are allowed into the camp, which make the claims of the refugees hard to verify. The Upper Bavarian authority, a sub-level of the Bavarian government that administrates Fürstenfeldbruck, which houses up to 1,000 people who are not allowed to seek work, insists that conditions are adequate. 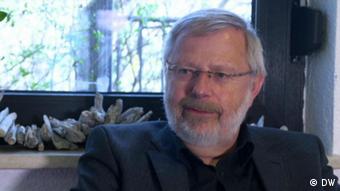 Willi Dräxler, integration commissioner for the town of Fürstenfeldbruck, says conditions in the refugee processing center are inhumane in the long term

One man who has had regular access to the camp, Willi Dräxler, integration commissioner on the Fürstenfeldbruck town council, said the conditions in the camp were often extremely difficult and not fit for human habitation on a long-term basis. He also told DW that he knew of multiple cases of people being admitted to psychiatric wards because they had expressed suicidal thoughts.

The authority would not confirm any suicide attempts, though DW has seen a hospital report describing one case, and refugees have talked of others.

Fürstenfeldbruck is one of Germany's so-called AnkER centers, which were established last summer by Chancellor Angela Merkel's government at the behest of Interior Minister Horst Seehofer (formerly state premier of Bavaria) as an attempt to streamline the asylum process by putting it under one roof. The name AnkER is an acronym standing for Ankunft, Entscheidung, Rückführung, or "arrival, decision, return."

Seven of Germany's AnkER centers, including the one that the Fürstenfeldbruck facility belongs to, are in Bavaria, with another two elsewhere: one in Saxony and one in Saarland. The German government said in April it is planning to expand the model to other states, which currently administer different types of refugee processing centers. 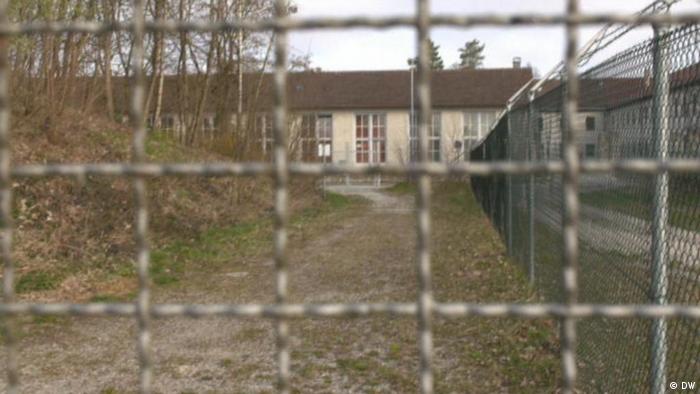 "It is a second prison," said Buchi, a Nigerian (name changed). "I know people here who would rather be in prison. Can you imagine?"

Tony (name changed), from another African country, said the camp was filthy and was only cleaned properly when government officials came to visit. "Trash everywhere, people pee outside because the toilets are not well cleaned," he said.

The Bavarian authorities say that the sanitary areas are cleaned five times a day — a claim that is impossible to verify independently, though several inhabitants sent videos of filthy toilets.

"Every time I go out, when I come back a sadness will just enter me," said Donald (name changed), another Nigerian. "You might go somewhere, but you come back sad. Security is not friendly, nobody is friendly."

The inhabitants also complained of poor medical care, with few doctors on duty; severe mental health crises leading people to attempt suicide; and of people with hepatitis B, which is transmitted through blood and body fluids, living in rooms with the uninfected.

The authority added, "If the health authority has determined any illness that is subject to registration, the individual will be isolated if it is deemed necessary." The spokesperson specified that asylum-seekers have the right to freely choose a doctor, a principle enshrined in Germany’s public health care system, and that they "have access to gynecologists, pediatricians, and psychiatrists." But the authority did not elaborate on what resources are available to find and access specialists or more comprehensive physical or mental health care.

The Upper Bavarian authority insists that conditions are fine: "The inhabitants of Fürstenfeldbruck are housed according to the appropriate guidelines," it said in a statement to DW. "The [centers] are designed by size and facility to adequately accommodate the needs to the inhabitants, especially their health and well-being. Each asylum-seeker is provided with a locker. There is adequate storage space for children's clothing in the rooms."

Bavarian Interior Minister Joachim Herrmann also defended the AnkER concept as a success. "With the AnkER facilities we have achieved an acceleration of the whole procedure," he told DW. "It now usually takes three months from the arrival of the asylum-seeker to the decision by the federal authority."

There are official limits on how long people are supposed to stay in AnkER facilities: Lone individuals are only allowed to stay two years, and families with small children are supposed to be limited to six months. However, DW spoke to several parents who claimed to have been there longer with their families. Many Nigerian women in the AnkER centers have 8- or 9-month-old babies who were born in the center. 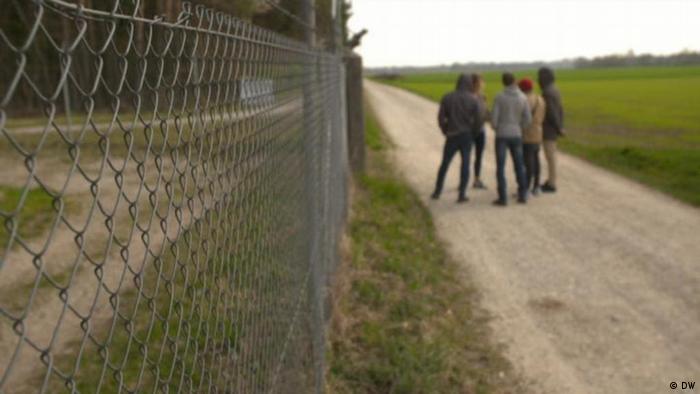 According to Herrmann, if people end up staying longer than the limits, it is either because they have lodged court appeals against their asylum decisions or their applications have been turned down. "Yet despite this there are some who haven't left voluntarily," he added, "so they remain in the country until they are deported by the police."

The Upper Bavarian government spokesperson, Verena Gros, took pains to inform DW that if an asylum-seeker stays in an AnkER center during a court case in which he or she appeals an asylum rejection, "that is because of their decision to appeal and not because of the AnkER center itself." However, according to German government figures, about half of asylum rejections are appealed, and of those approximately one-third is successful in overturning the previously incorrect rejection decision. Thus approximately 17% of appeals overall require a court process to reach a final and correct asylum decision.

For those living in the center, conditions can be difficult. Asylum-seekers in Fürstenfeldbruck are forbidden from keeping kitchen devices like water heaters or blenders in their rooms — a safety measure that "frustrates them very quickly," said Dräxler. "That dependence on the canteen is often a spark. Whenever there's a fight, it usually starts in the canteen."

Dräxler says food distribution is a constant source of frustration. On the days when meat is served (the authority and the refugees give differing accounts of how often this happens), there is no system to stop people returning for extra portions, which they take to their rooms and keep, leaving others with nothing. The result is fights in the food queues. "On those days, even security can't control it," said asylum-seeker Tony.

In addition, confusion and uncertainty about legal situations drive many to despair. Taha, from Yemen, told a story about his Jordanian friend who attempted suicide in March; the friend swallowed an overdose of pills after a discussion about the EU's Dublin Regulation, which lays out criteria for where a person can request asylum. "We called the ambulance, he was half-sleeping when they took him away," Taha said. "We were terrified."

"Our camp is … I cannot describe it to you, it's a disgusting place, really," he added.

DW has seen the hospital report from the episode mentioned above. It said the Jordanian was found among various prescription drug packages and described the 25-year-old's suicidal intentions and the list of tablets he took. Taha said that his friend survived, and spent two weeks in a psychiatric clinic.

The accounts obtained by DW from inhabitants and those with access to the camp mirror other reports and academic studies on conditions in the AnkER centers that have been published by human rights organizations like Pro Asyl.

Additionally, some NGO workers have compared the conditions at Fürstenfeldbruck to the chaotic scenes that took place during the so-called refugee crisis of 2015, when bureaucracies in Berlin and Munich struggled to cope as thousands of people poured into the country daily. Today, there are far fewer new arrivals than there were in 2015 and 2016.

No job, no life, crime threat

The conclusion some NGO workers have come to is that conditions are being kept poor deliberately in order to deter more people from claiming asylum. "The conditions in Fürstenfeldbruck are particularly bad," said Katharina Grote of the Bavarian Refugee Council, an independent organization that works for refugee rights. "I would definitely say it's a deterrence mechanism to leave people waiting with total lack of prospects and no possibility of a self-determined life."

"It's basically a giant storage cupboard for human beings," said Dräxler, who acts as a liaison between the administrators, refugees and the local people. Having seen the hopelessness in Fürstenfeldbruck for himself, Dräxler says it's a miracle that the town has been spared a serious incident.

As asylum-seeker Tony put it: "I understand that the government is aware of this, and that they have these type of camps so fake refugees would not want to come. But if that is the point they should just make it official that they don't want refugees and not make our lives a living hell in Germany."

German daily Süddeutsche Zeitung reported similar conditions in another AnkER facility near Munich, prompting calls from some local politicians from the Social Democratic, Left and Green parties to have them closed down. Nearly four years after the height of refugee arrivals, the German government's refugee policy still appears controversial and ambiguous, especially for those affected by it every day.

Three teenage migrants have been charged with hijacking a tanker that had rescued them off the coast of Libya. The case highlights some current problems with EU immigration policy. (30.03.2019)