Ashraf Ghani: 'This is part of our shame'

Afghan President Ashraf Ghani says women’s rights are a priority commitment. But how is he planning on ensuring them and how will he fight corruption, security threats and human rights violations in his country?

2015 has been a tough year for Afghanistan. In the first eight months alone, the country saw a spike in the number of civilian casualties and 120,000 Afghans fleeing the country to seek asylum abroad, according to the United Nations.

When asked if things could get worse, the president said it depends on how much regional cooperation Afghanistan could achieve. Ghani said cooperation with neighboring Paksitan was also crucial.

"Sovereignty of Afghanistan must be accepted categorically by Pakistan so that we can move forward."

According to Ghani, women’s rights are a top priority for him. "As long as I am president, the rights of women will be protected," he said.

When confronted with a photograph published by Human Rights Watch showing a 22-year-old Afghan woman who was sentenced to 100 lashes after being accused of sex outside marriage, Ghani held up the photo and said:

"This is part of our shame. We have inherited situations that are shameful, that are absolutely despicable.”

Abuse of women isn’t the only problem Afghanistan is facing. According to a report by the United Nations from August 2015, local and national militia groups carried out deliberate killings, assaults, extortion, intimidation and property theft with the backing of the government.

But Ghani rejected these accusations in the interview, saying: "We don’t have militias."

The 65-year-old president, who assumed office in September 2014, then admitted that local police behaved like militias prior to his inauguration, saying the government has "taken systematic measures" to deal with the issue and to remove the powerful political protection these groups have had in the first six months of 2015. 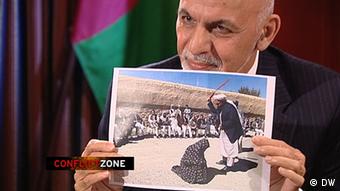 "This is our shame," Ghani said, holding up a picture of an Afghan woman being lashed

"We've had a difficult legacy of 40 years, and cleaning up is not going to be a one day job. But we are engaged in a systematic effort, we have not allowed formation of new militia groups, and we are reforming the local police systematically so that there won’t be abuse," Ghani said.

Dealing with impunity and corruption

"The Kabul Bank case that became the emblem of impunity has been dealt with. We’ve already collected 450 million dollars out of the 800 million dollars that was stolen from the public purse."

But just one month ago, the former CEO of Kabul Bank, Khalilullah Frozi, who was supposed to be serving a 15 year sentence for fraud, was released from prison and seen smiling with government officials.

Ghani said he was shocked to see the man free. "My shock didn’t turn into anger, but into action. And it sent a very strong signal that I will not tolerate it. (…) He's back in prison, in solitary confinement and under close attention." 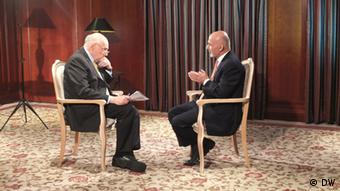 "We've had a difficult legacy for 40 years and cleaning up is not going to be a one day job," Ghani told Tim Sebastian

Afghanistan's president added that he's also dismissed the officials that were involved in the scandal and has ordered a full inquiry to deal with the case.

Loss of confidence because of economic instability?

Since Ghani was elected, polls show many Afghans losing confidence in where their country is headed. According to a poll conducted by the Asia Foundation, 54 percent of those surveyed in 2014 thought the country was going in the right direction. This year that figure dropped to just 36 percent.

Ghani explains this loss of confidence from his people with the economic challenges Afghanistan is facing.

"We've had to deal with an economic transition cost by the departure of over 600,000 troops and contractors that were the most important consumers and spenders in the country. We've had to impose an austerity program because the promises of the Afghan government to the national community were not credible.”

Urging Afghanistan's elite to make the most of opportunities at home

What doesn’t help Afghanistan's economy is the fact that the families of elite leaders often live abroad, such as the families of Ghani's vice presidents, who live in Turkey and Iran, and the family of Ghani’s chief executive, who lives in India. In fact, the families of the top cabinet ministers, presidential advisers and deputy ministers all live outside of the country.

In the interview with DW, Ghani urged Afghanistan's elite to make the most of opportunities at home rather than moving abroad. 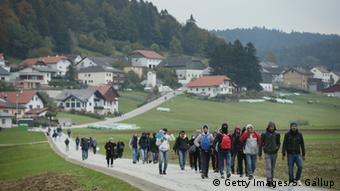 According to German authorities, some 31,000 Afghans arrived this year through October

"The privileged elites are part of the globalization moment that we live in. What is significant is to create opportunities for the generations to come. If the families of the privileged live abroad they are not going to have careers abroad. Their careers are back in Afghanistan. (…) If they live abroad they become dishwashers. They don’t become part of the middle class."

Ghani himself, however, did rather well when living abroad in the United States, completing a doctorate in anthropology and becoming a professor at Johns Hopkins University before returning to Afghanistan after the fall of the Taliban.

Confronted with this fact, Ghani said: "The minute opportunity was created in 2001 I returned. I hope that the new generation of our friends will have the same sense of patriotism and respond to the conditions of our country."

The president said he was hopeful the Afghan people would succeed in dealing with the numerous issues the country is facing.

"We are a free society, we engage in debate, and that is our characteristic," Ghani said, adding: "Our job is to heal and to move forward. Not to perpetuate, not to get bogged down."

Merkel: We will have to return people to Afghanistan

This year alone, more than 140,000 Afghans have fled insecurity and the Taliban's resurgence. The majority of them have ended up in Germany. In Berlin, Ashraf Ghani and Angela Merkel vowed to stem the flow of migrants. (02.12.2015)

As the battle for Kunduz city raged between Taliban militants and government forces, almost half of its residents were thought to have fled. Most have returned - to an unstable, uneasy existence, reports Catherine James. (01.12.2015)