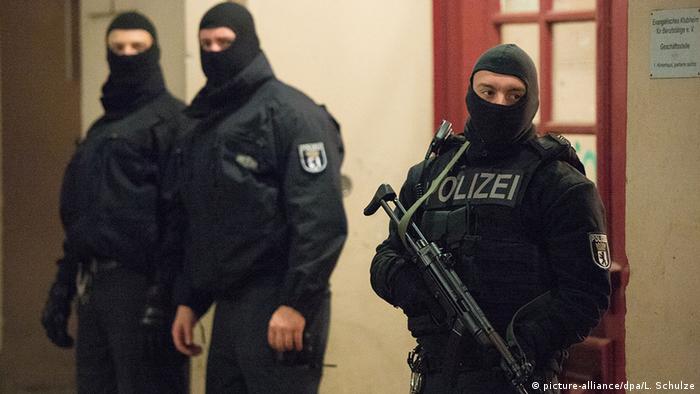 More than 200 German police officers raided suspected Islamist hotspots in and around the country's capital, Berlin, early Friday. Authorities arrested the suspected leader of a group allegedly preparing to carry out an attack in Syria, along with a person responsible for the group's finances, police said.

Police alleged that the men were suspected of recruiting fighters and of procuring equipment and funding for the "Islamic State" (IS) terrorist group in Syria.

One of the men arrested, identified as Ismet D., in accordance with German privacy laws, a 41-year-old man of Turkish origin. He was "suspected of leading an Islamist extremist group made up of Turkish and Russia nationals from (the Caucasus regions of) Chechnya and Dagestan," German police said in a statement. Adding, "there is no indication that the group was preparing attacks inside Germany."

Emin F., a 43-year-old, is accused of being in charge of the group's finances.

Authorities say the raids were part of a months-long investigation into a small group of extremists based in the capital.

The raids across Berlin came just hours after two suspected Islamists were killed in a police raid on suspected jihadists in Belgium on Thursday night and one week after Islamist attacks in Paris killed 17 people.

German Chancellor Angela Merkel said Thursday there were would be heightened security measures against Islamist militants following the attacks in France.

Caucasus refugees need 'a sense of orientation' in Berlin

Some men from Chechnya and Dagestan were among the suspects in a major Berlin police raid against Islamists. In Berlin, Ekkehard Maass works closely with those from the region and discusses whether they pose a danger. (16.01.2015)