One of the largest social movements in Hong Kong's history has also fueled more anti-Beijing sentiment in Taiwan. Do the protests serve as a warning for Taipei as it considers the future of relations with mainland China? 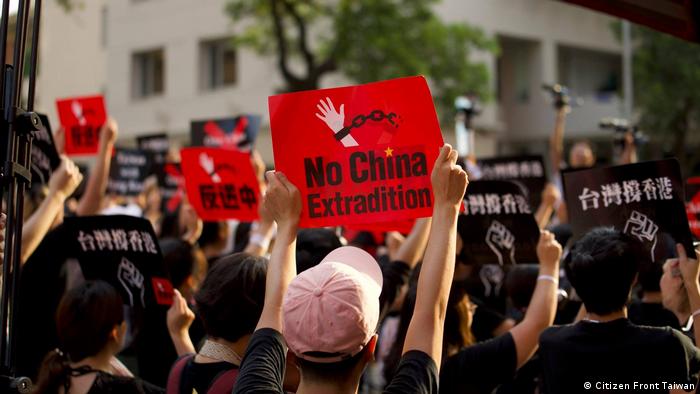 Hong Kong's anti-extradition bill protest movement has plunged Hong Kong into its worst crisis in decades, with large-scale marches and violent clashes between protesters and police breaking out multiple times over the last three months.

And it all started with the controversial extradition bill, which was aimed at resolving a complicated murder case that happened in Taiwan.

While the anti-extradition bill protests have evolved into a larger movement calling for universal suffrage and preserving civil society in Hong Kong, the movement has also created a ripple effect being felt in Taiwan.

Since the start of the movement in Hong Kong, Taiwanese President Tsai Ing-wen has repeatedly thrown her support behind anti-extradition bill protesters on her multiple social media platforms. The gesture has helped to boost her approval rating in Taiwan, which was hovering around 25% a few months ago and has shot up to 35%. The boost helped Tsai to win the Democratic Progressive Party's (DPP) 2020 presidential primary last month.

Realizing the positive politics of supporting the anti-extradition bill movement, Tsai and her administration begin a consistent public campaign to side with the Hong Kong protesters.

On Monday, Taiwan's foreign minister, Joseph Wu, condemned the violence against protesters, emphasizing that "the way forward is with genuine democratic elections."

Experts think it is clear that the protests in Hong Kong have become reminders to Taiwanese people that there could be huge political risks if they choose to formally reunite with the People's Republic of China one day.

Taiwan's current leadership under Tsai also rejects the "One country, Two systems" governance model that is in place in Hong Kong, which allows for semi-autonomy under the umbrella of "one China" rule from Beijing.

Wei-Ting Yen, an assistant professor in government at Franklin and Marshall College in the US, said the phrase "Today's Hong Kong could be tomorrow's Taiwan" has become tightly associated with the anti-extradition bill movement in Hong Kong, as it highlights the anxiety that some Taiwanese people are feeling when they look at things unfolding in Hong Kong.

"Hong Kong has served as a reminder to Taiwanese people, helping them better understand the political risks behind building closer ties with China,"Yen told DW. "The violent clashes in Hong Kong are also reminding older Taiwanese people of similar tactics used by Taiwan's government during the martial law era."

With Tsai and the ruling party continuing to reject the One Country, Two Systems model, Yen thinks the anti-extradition bill movement is helping Tsai to strengthen her political message.

"As long as the anti-extradition movement continues to unfold, Tsai can continue to capitalize on it politically," Yen said. "If the movement prolongs, her anti-unification discourse could have an even stronger political impact.

A warning for Taipei?

Since the start of the anti-extradition bill movement in March, distrust in China has been rising in both Taiwan and Hong Kong, as protesters warned Taiwanese people not to vote for Taiwan's pro-Beijing opposition Kuomintang (KMT) party.

"Some pro-China politicians in Taiwan have proposed the idea of signing a peace treaty with China, but Taiwanese people should know from Hong Kong's experience that the one country, two systems model is fake," a Hong Kong student named Kwok told DW, adding the Beijing continually breaks its promises.

Multiple solidarity rallies for the anti-extradition bill protest have taken place throughout Taiwan since June, and thousands of people took part in these events.

Activists have said that part of the reason why interaction between Hong Kong and Taiwan's civil society has increased is because both places are at the front line of Beijing's expansion goals.

Prominent Hong Kong pop star, and pro-democracy advocate, Denise Ho said that Hong Kong's experience proves that China has been deceiving people with grand promises, which should serve as a reminder for Taiwanese heading to vote for president in January 2020.

"It has only been 22 years since the handover [of Hong Kong], but China has openly called the Sino-British Joint Declaration a historic document that they don't need to uphold," Ho told DW. " A similar situation could soon happen to Taiwan."

As Taiwanese sympathy for Hong Kongers grows, the island has also taken in some Hong Kong demonstrators. Multiple Taiwanese news outlets reported on July 19 that dozens of protesters fearing prosecution for their involvement in the ransacking of the legislature had arrived in Taiwan.

There has been a surge in Hong Kong immigrants to Taiwan in recent years, but it also exposes Taiwan's lack of proper legal mechanism to assist these asylum seekers.

Following news of two Hong Kong activists being granted refugee status in Germany in May, Denise Ho thinks the latest episode in Taiwan is a big blow to the Hong Kong government's credibility.

"I think this is a big slap in the face to the Hong Kong government," Ho told DW. "It shows that Taiwan has a much healthier system than Hong Kong."

Despite a possible backlash from Hong Kong's government, Ho hopes President Tsai can help assist these asylum seekers from Hong Kong. "I think this is the right thing to do."