While rummaging through part of Amsterdam's city park, citizen scientists discovered new insect species. Their aim was to show that even in Earth's busiest places, biodiversity is still underexplored. 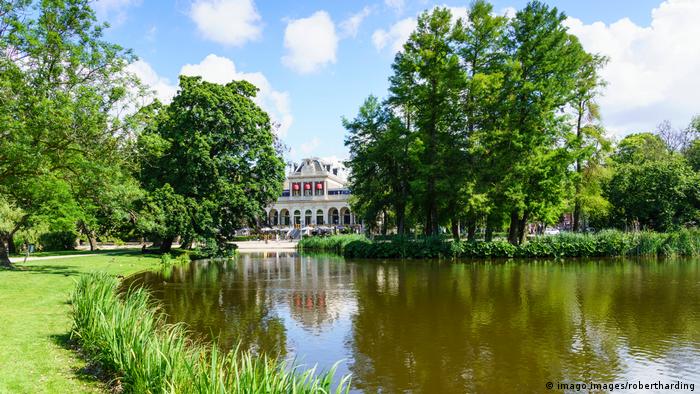 Vondelpark, Amsterdam's public urban park in the southwest of the city, is anything but a remote place. Even on a weekday, it's full of people taking a stroll, playing soccer or chatting with friends on the neatly mowed grass.

There are also countless people bicycling on the wide, paved roads — after all, this is the Netherlands.

Vondelpark definitely might not seem like the ideal place to look for new species of insects, but biologist Iva Njunjic begs to differ.

"Unknown biodiversity is lurking everywhere, even in this place dominated by humans."

Njunjic works for Taxon Expeditions, a Netherlands-based organization that offers ecotourism trips, usually to places like Borneo, Panama and Montenegro. 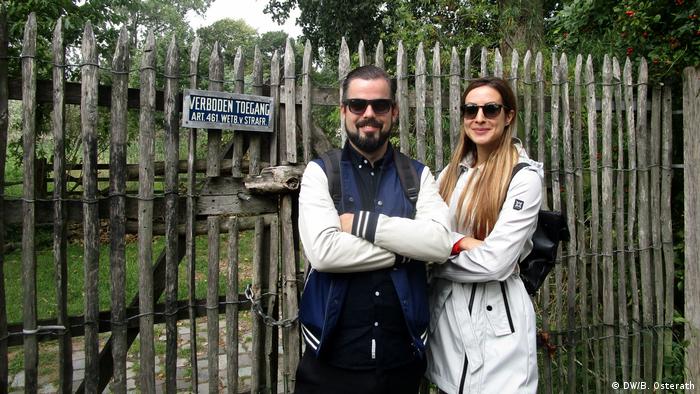 A single path leads to the reserve, which is padlocked and clearly off-limits to the general public.

Managed by an Amsterdam citizens' initiative, the Koeienweide — an island surrounded by canals — clearly hasn't seen a lawnmower for quite a while.

Every day for a week, eight amateur researchers set up traps on the island to catch different kinds of resident critters, such as spiders, beetles, worms and moths.

"I'm not sure how many species we caught but I was surprised that it was so many," Norbert Peeters, a participant and philosopher from the city of Leiden, told DW.

Iva Njunjic says the group collected 143 different types of moths alone. Taxonomy experts at the Free University of Amsterdam helped the amateur researchers identify the species under the microscope. 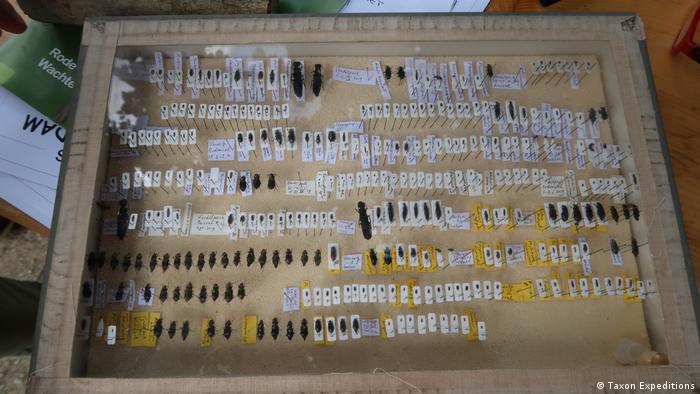 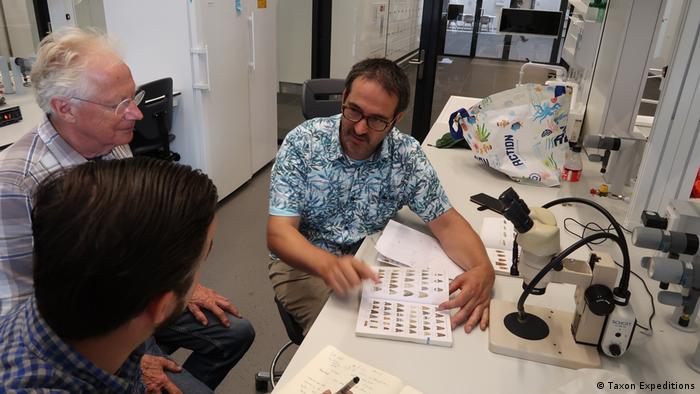 With the help of Menno Schilthuizen, the citizen scientists identified every species of insect they caught at Vondelpark

"By the end of the week we were given some hints that we might be onto something," Peeters said.

It turns out the group discovered two species of insects that hadn't previously been described by scientists.

Njunjic unscrews a small plastic container to reveal one of the new finds. It is a small black dot, no larger than 3 millimeters or one-eighth of an inch, glued to a piece of paper and neatly labelled.

She explains that it's a beetle belonging to the family of Leiodidae, commonly called "round fungus beetles."

It most likely lives underground. "We think this species probably feeds on some decaying organic matter or fungi because we found it in a trap with meat and cheese."

Its penis gave it away

How did they know this beetle was a new discovery?

"It differs from very closely related species from southern Europe by the shape of its penis," Njunjic explains and laughs. "When studying insects we compare male genitalia. So we had to dissect its penis and observe it under a microscope."

The group decided to name the new species after the band "The Beatles," because as Njunjic puts it, "it's kind of unfair that there is no beetle species named after them yet." Its full name will be Ptomaphagus beatles. 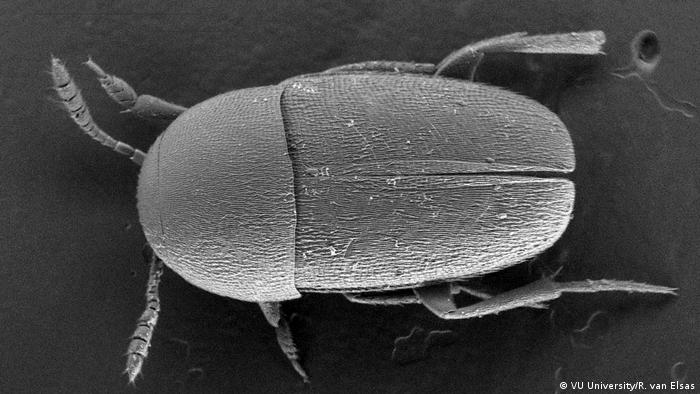 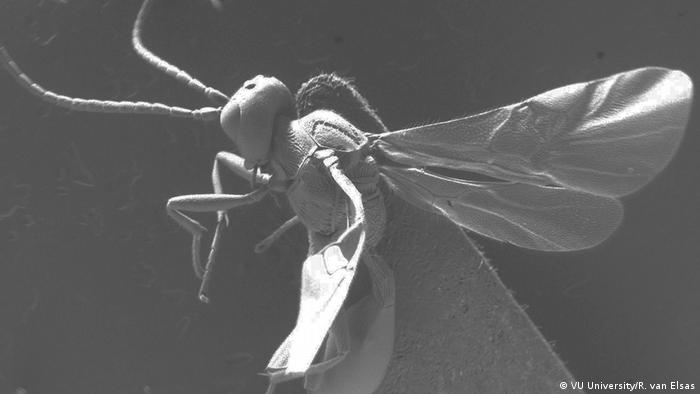 The new species of parasitic wasp, Aphaereta Vondelpark has a size of only about 3mm

The group of researchers also found a new species of parasitic wasp, which are small insects that lay their eggs on or in the bodies of other invertebrates, sooner or later causing the death of their hosts.

The new parasitic wasp will be named Aphaereta Vondelpark to honor the place where it first was found.

According to Martin Kubiak, insect researcher at the Center of Natural History at Hamburg University, who was not involved in the study, the outcome of the Vondelpark expedition is "not surprising."

While the fauna in Central Europe is well explored in terms of species of vertebrates, butterflies and dragonflies, there is still much to discover in other parts of the animal world.

"We still know amazingly little about insect groups comprising beetles, wasps, bees, flies and mosquitoes, especially if they are only 1 to 2 millimeters big," Kubiak says.

In 2011, biologists from Dalhousie University in Halifax, Canada, estimated that there are an overall 8.7 million species on Earth.

So far, scientists have only described 1.5 million species. 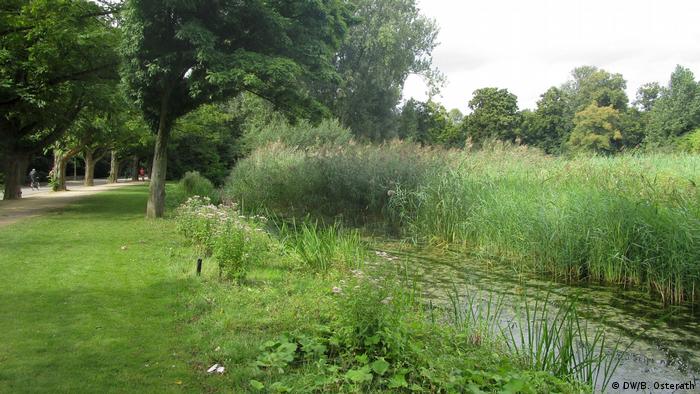 When biologists at the Bavarian State Collection of Zoology in Munich analyzed the genetic material of a large number of insects they had trapped across Germany, they were able to estimate that 930 different gall midges — a family of flies — live around us, yet only 800 species have been described so far.

Biodiversity and the city

Like Norbert Peeters, many people might assume that cities are not where animals are most likely to be found.

But Menno Schilthuizen, evolutionary biologist at Naturalis Biodiversity Center in Leiden and co-founder of Taxon Expeditions, says the opposite is the case.

"In a country like the Netherlands, cities are actually biologically rich in comparison to the countryside," he told DW. "This is because there is intensive agriculture everywhere."

The organizers hope their findings will shed light on the importance of insects.

"Even though they're so tiny they perform many important functions like aerating the soil, decomposing organic matter and pollinating the plants," Iva Njunjic says. "Everyone wants to save pandas and lions, but insects are actually more important."

Why are farmers in Morocco becoming insect guardians?

Bees, butterflies and other pollinators are threatened around the world. One project is encouraging farmers in Morocco to use blooming fields and insect hotels to protect them. (14.08.2019)