Another massive rally has been held over the arrest of Sergei Furgal, ex-governor of the far-east Khabarovsk region. The Kremlin detained the popular politician last month, accusing him of masterminding several murders. 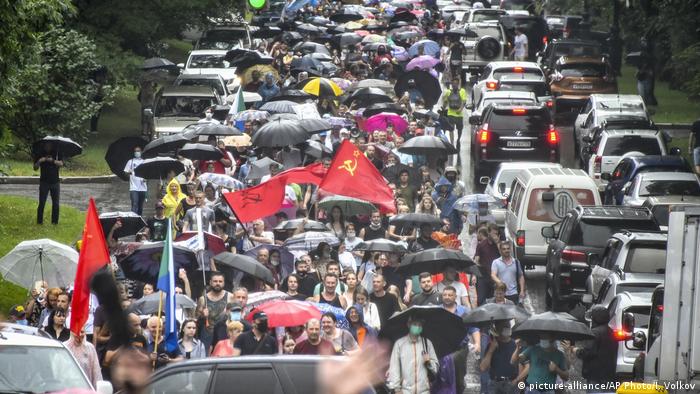 Thousands of protesters hit the streets of the far-eastern Russian city of Khabarovsk on Saturday for the fourth weekend in a row to vent their frustration at the arrest of the region's popular former governor.

Many demonstrators chanted anti-Kremlin slogans in support of Sergei Furgal, who was seized and taken to Moscow last month to face allegations relating to murders dating back 15 years.

Sheltering from sporadic rain beneath umbrellas, protesters chanted "Freedom!" while one banner called for "Russia without Putin."

Some local news reports said the latest rally drew about 30,000 people, while police claimed the crowd was about 3,500. 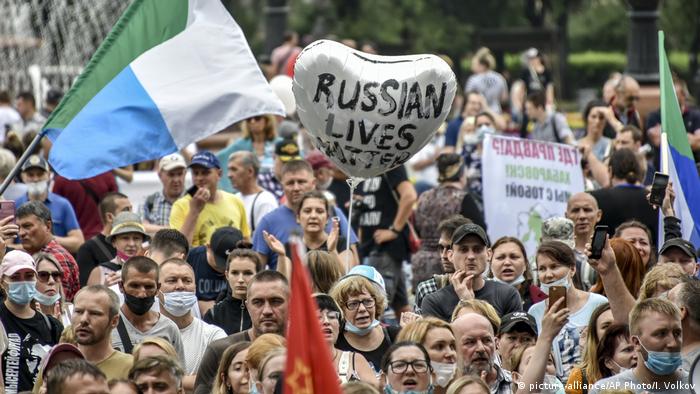 The arrest of the 50-year-old Furgal, who was elected in 2018, has mobilized the residents of Khabarovsk — a city that lies just 30 kilometers (19 miles) from the Chinese border — as well as the wider region.

They see Furgal's detention as politically motivated and question why he is being tried in the capital, more than 8,000 kilometers (4,970 miles) away. He is currently being held in Moscow's notorious Lefortovo Prison.

President Vladimir Putin has subsequently replaced him with a governor who has no ties to the region in a move that has not gone down well with locals.

Furgal's arrest, on July 9, came just days after Putin won a landslide vote on constitutional reforms that means he is set to extend his rule until 2036. He has already been in power for two decades.

Smaller demonstrations took place in at least ten other cities in the same part of Russia, and 55 people were arrested, according to the OVD-Info organization that monitors political arrests.

No arrests were reported at the rain-soaked Khabarovsk rally.

Anti-government demonstrations have rocked Russia's far east over the arrest of a governor who was replaced by a Kremlin appointee who never lived in the region. Protesters demand a public trial for Sergei Furgal.