Anti-Kremlin protests in Khabarovsk: ′We hate Moscow!′ | World | Breaking news and perspectives from around the globe | DW | 26.07.2020

For the third weekend in a row, tens of thousands in Russia's furthest eastern regions have protested the arrest of regional ex-governor Sergei Furgal. Their distrust of the Kremlin could have powerful consequences. 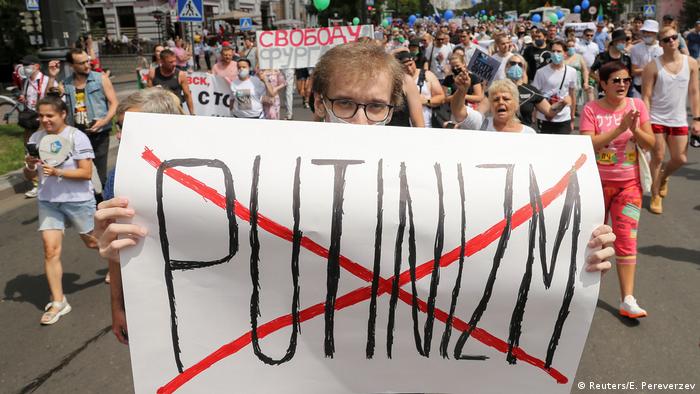 Zahar Zaripov is outraged. "How can Putin's trust be more important than the trust of the people?" The 36-year-old math teacher has just come back from a demonstration and can hardly calm herself down. "Our governor was dismissed by Putin, because he supposedly lost his trust. And what about our trust? We were the ones who elected the governor, not Putin!"

Zaripov and his wife, along with their 5-year-old daughter, joined tens of thousands of other protesters in the far eastern Russian city of Khabarovsk this weekend to demonstrate against the arrest of provincial governor Sergei Furgal earlier this month. The protests were also generally against the Kremlin's politics in the region.

The weekend's protests, reportedly the largest to have taken place over the past weeks, included chants of "Freedom for Furgal," "This is our region," and "Away with Putin!"

On July 9, Furgal was arrested in front of live cameras and brought to Moscow, where he was placed in pre-trial detention in Moscow. The politician is accused of being involved in a series of murders 15 years ago, but has denied the allegations.

Furgal sees his arrest and removal from office by Putin as politically motivated. The former governor belongs to the opposition LDPR party, led by ultraconservative populist Vladimir Zhirinovsky, and won the governor's election two years ago with nearly 70% of the vote, defeating the Kremlin-backed candidate. Zaripov considers Furgal's removal as a clear attempt by the Kremlin to silence the opposition. 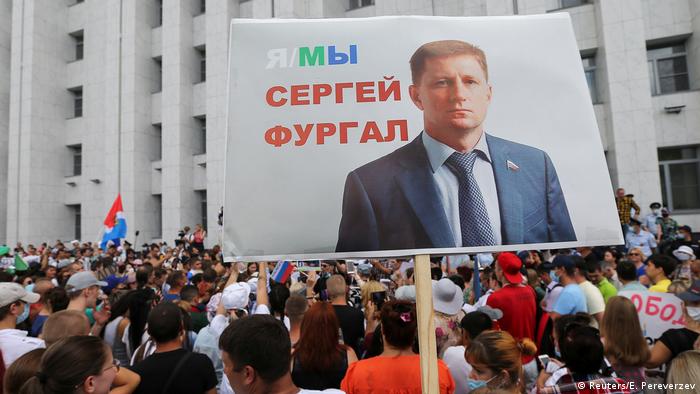 Furgal appears to be popular in the region. "At least he did something for us, unlike other politicians," Zaripov says of the ex-governor. "Normally the governors are sent to the region from Moscow. In the best of cases, they speak with mayors or representatives, but never with the voters. But Furgal was different. He helped us."

In his two years in office, Zaripov added, Furgal traveled across the far east and solved lots of problems that had accumulated since the fall of the Soviet Union.

However, more than anything else, it is the manner in which government officials have dealt with the elected politician that has drawn Zaripov and thousands more to the streets. They see his media-primed arrest in broad daylight as an act of pure despotism by Moscow officials, and a public insult to voters, as well as a move that demeans those who live far from the Russian capital.

According to independent political analyst Ilya Graschenkov, the Kremlin did not foresee the consequences of Furgal's showy arrest. In an interview with DW, Graschenkov highlights the unique mentality of the inhabitants of Russia's far east: "These are protests against Moscow and against the heavy pressure that the Kremlin traditionally exerts on local politicians. Local elites fear for their livelihoods and in this case, they're showing solidarity with common people, who feel betrayed."

Moreover, the analyst believes that Khabarovsk is simply too far away from Moscow. More than 9,000 kilometers (5,600 miles) separate the two cities. "Almost no one from the region has been to Moscow. For many, Moscow is both geographically and mentally further away than neighbors like China, South Korea or Japan. They see that their direct neighbors are in a better economic situation, and so they orient themselves more towards them than Moscow," Graschenkov says.

There are also pragmatic reasons why people in Khabarovsk don't speak well of Moscow and the Kremlin, explains Zaripov, who comes from a small town on the region's easternmost edge and happens to be in the provincial capital this weekend. "We hate Moscow. This hate began with the prohibition on cars that had the steering wheel on the right, which we used to be allowed to import cheaply from Japan. Now we have to pay high tariffs. Ever since this ban on cheap Japanese cars, the levels of popular support for the central government has gone down." 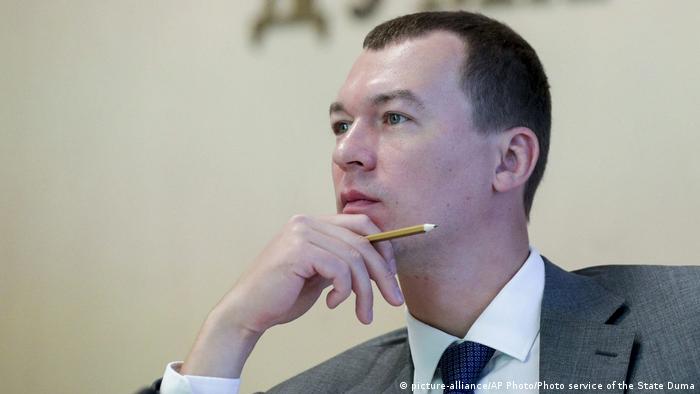 How dangerous is this hate for the Kremlin? Graschenkov points to a growing atmosphere of protest in all of Russia and describes the demonstrations in Khabarovsk as an initial sign. "We're seeing scattered demonstrations of solidarity in other cities throughout the East, too. The initial demands vary greatly, but the Kremlin knows that the declining standard of living can unite people and that their anger can become very intense."

Graschenkov also highlights other protests taking place in Russia — political, economic and ecological. "The Kremlin underestimates the common people's disposition to protest and fears the regional rulers, elites who can be divided into those who are loyal and those who are disloyal to the Kremlin. The disloyal elites could use the feeling of protest to organize a putsch inside the Kremlin." This is exactly what Moscow is really afraid of, he explains.

Up until now, the police have not gotten involved with the events in the far east. The demonstrations have proceeded peacefully, despite the fact that the local population does not view the interim governor sent by Moscow favorably. While the 39-year-old Mikhail Degtyarev belongs to the same party as the deposed Furgal, he is seen as the Kremlin's candidate. His nomination by President Putin was broadcast by state television. He has been in Khabarovosk for a few days but has avoided contact with locals. He left the city over the weekend, stating, "I have these days off, after all. I want to use the time to get to know the region."