A Moscow court has ordered Sergei Furgal to be held in pre-trial detention for months for his alleged involvement in several murders. The move angered his supporters, who took to the streets, shouting "Putin's a thief!" 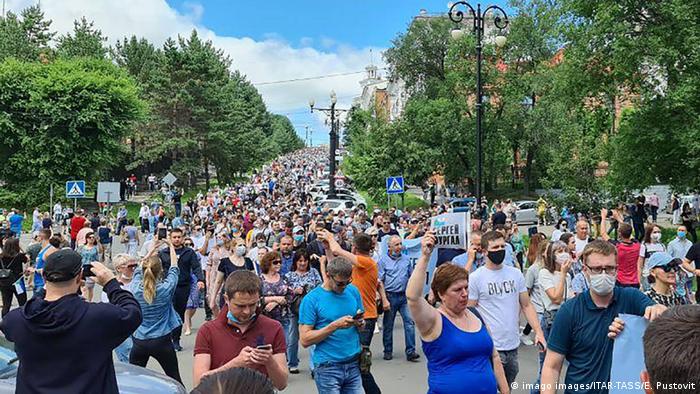 Tens of thousands of people gathered in cities across Russia's far-eastern Khabarovsk region on Saturday, demanding the release of their governor.

A Moscow court on Friday ordered Sergei Furgal to be held in pre-trial detention for two months.

Furgal was detained a day earlier in connection with several murders and attempted murders of entrepreneurs in 2004 and 2005. He has pleaded innocent to the charges.

Supporters of the governor took to the streets, shouting: "Shame on Moscow," "Putin's a thief," and "Down with the tsar," in references to President Vladimir Putin.

Read more: Russia accuses yet another journalist of 'treason' 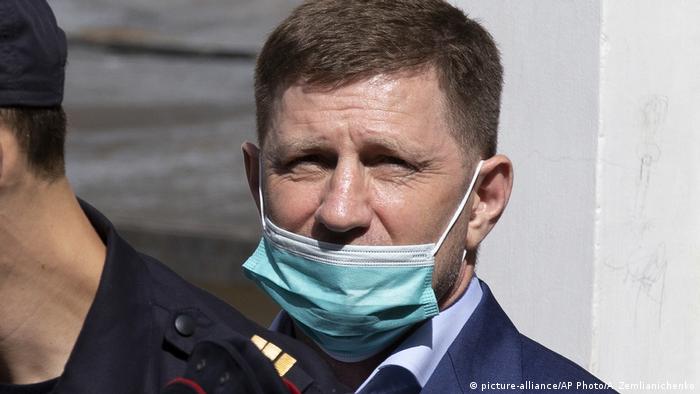 Others carried signs with the slogans: "I Am Sergei Furgal" and "Free Furgal."

Observers in the city of Khabarovsk spoke of the biggest protest in years, reported the German press agency.

The AFP news agency said tens of thousands of people took part in the Khabarovsk march.

Similar but smaller rallies took place in Komsomolsk-on-Amur, Elban, Solnechny, and other cities in the region.

The demonstrations were largely peaceful and there were no arrests, reported local media.

"We are sure you will be heard," the governor's spokesperson Nadezhda Tomchenko told demonstrators via Instagram.

Standing as a candidate for the nationalist Liberal Democratic Party of Russia (LDPR), Furgal became governor of the Khabarovsk region that borders China in 2018.

Furgal is considered the "organizer of the attempted murder and the murder of a number of business people," said Russia's Investigative Committee in a statement.

Zhirinovsky accused the government of using "methods from the Stalinist era."

They will be held in custody until September, reported Radio Free Europe, citing a district court representative.

Moscow has reacted to Britain sanctioning 25 Russian nationals. The Kremlin said it was an "unfriendly" step and would be met with a "retaliatory response." (07.07.2020)

Yulia Tsvetkova faces charges of "spreading pornography" for artwork promoting body positivity, including for posting vagina drawings on social media. Her case has sparked a wave of support among activists and artists. (07.07.2020)

The constitutional reform bill allows Russia's President Vladimir Putin to run for president again and bans same-sex marriage, among other changes. Opposition figures said the vote was marred by irregularities. (02.07.2020)

Ivan Safronov's arrest "could be connected with his previous publications about the military," according to a report. He joined Roscosmos in May this year as policy adviser to the agency's chief Dmitry Rogozin. (07.07.2020)

The Russian TV journalist who protested the war in Ukraine was briefly detained in Moscow. She had recently returned to Russia after working for German newspaper Die Welt.