Donald Trump’s recent actions as president have sparked fierce backlash across the United States. Many young, liberal Americans living in Germany are now looking for ways to make their voices heard, too. 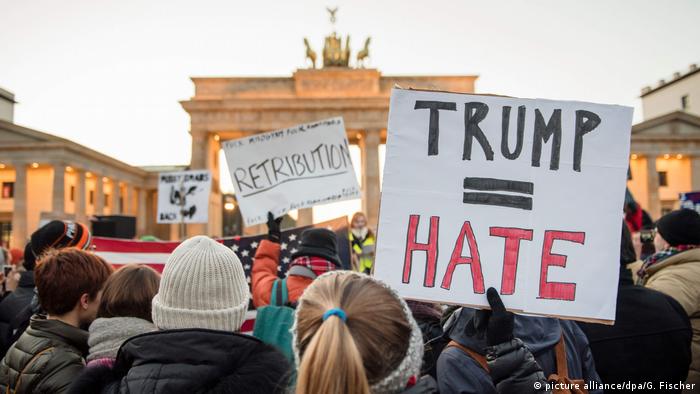 Sara Grossman, a 23-year-old Californian living in Berlin, found it hard to sleep following the events of this past weekend. She simply felt too riveted, watching as mass protests erupted across the US in response to Trump's decision to suspend refugee arrivals and impose new restrictions on travelers from seven Muslim-majority countries.

She also felt a little bit guilty. Though already politically active - she writes about progressive issues for a research center at the University of California, Berkeley - the developments made her feel like she wasn't doing enough.

"Everyone I see on Facebook is at protests and fighting the fight and getting involved," Grossman told DW. "I feel it's a privilege living here, almost."

In response to Trump's recent actions in the White House, Grossman, who moved to the German capital just prior to the election, started donating to Planned Parenthood, the family planning center whose federal funding the Republican Party wants to cut. She also works with an organization that helps refugees learn how to code. 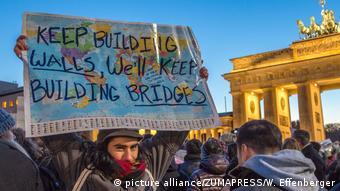 She is one of the many young, liberal Americans in Germany whose political impulses have been reinvigorated in light of the 2016 election. The surge in interest from young expats following Trump's inauguration has been especially noticeable for those working for Democrats Abroad (DA), the official overseas arm of the Democratic Party.

"We're seeing a very visible uptick in membership," Quaide Williams, the organization's chair for Germany, told DW. "It kind of goes against the narrative that young people are not very partisan and not very active."

Around 9,000 Americans belong to DA Germany, according to numbers from the organization, which don't include the post-inauguration spike. Of those who most recently joined, Williams said that around 80 percent were under the age of 35. He attributes the rise in membership to growing angst over the Trump Administration's recent actions.

"I really do think that people are shocked," Williams said. "I think a lot of people thought, ‘Oh well, maybe it won't be that bad.' And now they're seeing that it is." 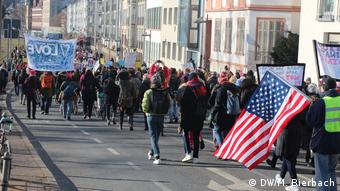 Europeans and Americans participated in a "Women's March" in Frankfurt

'The first point of call'

Powen Shiah, a 33-year-old who grew up in Michigan and works as the communications coordinator for DA's Berlin chapter, said American expats are looking to the organization for leadership. "It's the first point of call," he told DW. "‘I don't know what else to do. I'm just an American living in Berlin.' And that's what we're here for."

Besides doing voter outreach and promoting policy issues in line with the Democrats' agenda, DA also organizes regular chapter meetings, events and sometimes demonstrations. The relatively young DA chapter in Hamburg, for example, organized a Women's March in January to coincide with similar ones in Berlin, Frankfurt and other German and European cities. According to one member of the Hamburg chapter, what was planned as a march for a couple hundred participants ended up drawing around 700.

Jennifer, a 29-year-old American from California who works for a consulting firm in Frankfurt and declined to give her last name, said she's now planning to attend DA meetings in her city despite considering herself more of a centrist or libertarian. Like many others, she was inspired by the protests of the past week and felt that living abroad shouldn't be a free pass for her to not get involved.

"I feel a structured mechanism [like DA] to protest or organize from here might be more effective than what I do alone," she told DW.

Her colleague, a 32-year-old New Yorker named Josh who also declined to give his last name, said one action he was undertaking was simply "to be a good, respectful American overseas, and not be loud and be understanding and show that even if you voted for Trump, the vast majority of people are decent, good people."

Like them, Sara Grossman said she was thinking of looking into DA. There are all sorts of ways to get involved, she said, from donating money, to participating in protests, to simply following the news, and she still had to do more research regarding the different opportunities.

"Everyone has different avenues to make their voices heard," she said.

US President Trump's order banning travelers from some majority-Muslim countries from entering the US has taken effect. Politicians, including the German chancellor, and rights groups have voiced concern at the ban. (28.01.2017)