Angela Merkel has said the UK cannot pick and choose which parts of the single market it wants to keep after Brexit. The chancellor insisted that Germany would stand up against any attempts to hollow out global trade. 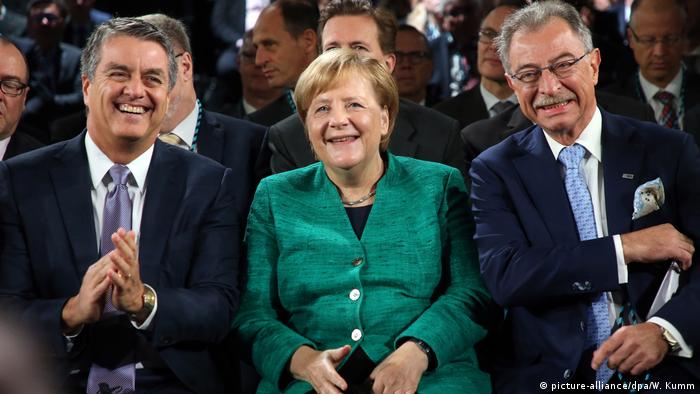 German Chancellor Angela Merkel on Tuesday dismissed hopes in Westminster that after Brexit the UK could continue have access to the EU single market for goods only.

Merkel nevertheless remained confident that the UK and EU would manage to reach a deal by October.

Defender of global trade: Merkel also asserted that Germany would stand up against any forces seeking to erode the global trade regime. The World Trade Organization (WTO) was facing "huge challenges," she said, spurred in particular by US President Donald Trump's decision to slap punitive tariffs on Chinese imports worth billions of dollars. "If the rules aren't being kept to, that means the system is being hollowed out," she said.

Germany stronger in Europe: The chancellor also said she was grateful that Germany, as a member of the EU, was protected from direct US trade pressure. Trump has repeatedly hammered Germany for its trade surplus. Merkel also lauded Brussels for agreeing with Washington to impose a temporary freeze on further tariff hikes.

Read more: US trade with the EU, Germany in numbers

Merkel admits government must do better:  Merkel echoed remarks made in her speech on Monday, in which she apologized for the scandal engulfing former German intelligence chief Hans-Georg Maassen. The government had been too "preoccupied with itself," she admitted, adding that she wished the incident had been handled differently. Earlier, Dieter Kempf, the head of the Federation of German Industry, accused Merkel's Cabinet of doing more infighting than governing.

Can EU steelmakers cope with US tariffs?

Pet owners could face major traveling hurdles if no Brexit deal is reached with the EU, the British government warned. A no-deal scenario could also ground airlines, halt trucks and create headaches for Scotch whisky. (25.09.2018)

What China could do to counter US tariffs

Amid intensifying trade friction between Washington and Beijing, a new round of US tariffs took effect on Monday, raising the stakes for both sides. China seems to have several tools up its sleeve to counter US tariffs. (24.09.2018)