African economies are beginning to recover from the impact of COVID-19. Despite making some gains in 2021, it could be difficult for nations to grow their economies in 2022, it seems. 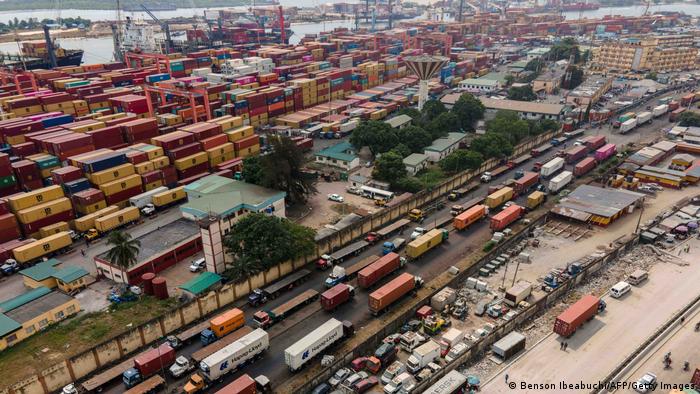 African economies were badly hit by the emergence of COVID-19 in 2020 and the subsequent slowing of the global economy. On top of this, the lockdowns and restrictions accompanying the pandemic led to drops in the manufacturing of goods, trade volumes, investments, tourism and other revenue-generating activities across the continent.

The availability of vaccines raised the prospect of containing the virus in Africa, although less than 10% of African nations hit the 2021 end-of-year target of vaccinating 40% of their population, the World Health Organization reported.

Some of Africa's poorer nations bounced back slightly in 2021. According to World Bank figures, emerging and developing economies, most of which are in Africa, grew by 6.3% at the end of 2021.

Looking at only sub-Saharan Africa, however, these figures are somewhat less positive. The region had economic output growth of 3.5% in 2021, mainly driven by a rebound in commodity prices and an easing of social restrictions.

The World Bank projects that this marginal growth in sub-Saharan Africa will continue in 2022.

Economist Courage Martey says that this small growth will be driven mainly by resource-rich African nations.

"Commodity-dependent economies — like Nigeria, for instance, which relies on oil; Angola, Zambia on copper; even Ghana on gold — are expected to help mitigate some of the current challenge and help with economic recovery," said Martey, who is a senior economist at Databank Financial Service in Ghana's capital Accra.

These could range from new COVID-19 variants to a rise in inflation and debt, as well as income inequality, according to the World Bank's latest "Global Economic Prospects" report.

The fast-spreading omicron variant only shows that the pandemic is likely to continue to disrupt economic activity despite the availability of vaccines.

Economic recovery is also threatened by simmering conflicts, such as the civil war in Ethiopia; political instabilities in Sudan, Guinea and Mali; and spiraling insecurity in the entire Sahel region.

For African merchant Louis Yaw Afful, unresolved conflicts pose a particular challenge to anticipated growth for economies in Africa in 2022.

"We need to critically look at security because it is really intrinsic to the development and growth of trade," Afful told DW.

A free trade zone officially began under the African Continental Free Trade Agreement (also known as AfCFTA) in early 2021, which has been signed by all African countries except Eritrea.

Trade under the agreement is supposed to eventually result in a liberalized single market for goods and services, facilitated by the easy movement of people and capital.

In the long-term, the agreement is touted as having the potential to expand manufacturing, reduce poverty and inequality trends, and spur sustainable and inclusive growth.

While the amount traded in 2021 under AfCTA was limited, Afful — who also works with the AfCFTA Policy Network in Accra — expects this to increase in during 2022.

"For AfCFTA, the agreement is also going to see that the rules of origin will be ready, which is very important," he said, referring to criteria that determines the source, or country of origin, of a product.

Because duties and restrictions will fall on goods and services from countries that have ratified the agreement, once the rules of origin are established, Afful explained, this would "actually give originating status to products made in Africa."

Currently, most African countries lack the technical infrastructure needed to support free trade under the agreement. But Afful remains hopeful.

"2022 has good prospects in that when digital trading … [gets] adopted alongside other phases of the agreement, it will enable the fast-tracking of a lot of the supply chain and the procurement chain," Afful said.

A majority of African economies are wrestling with fiscal deficits that have forced nations to go on borrowing sprees. In 2021, much of that borrowing was in response to the impact of the COVID-19 pandemic.

Martey sees it being much harder for sub-Saharan African nations — such as Ghana, Zambia and Nigeria, which need major debt finance — to access foreign investment in 2022, especially as some developed economies, such as the United States, struggle to contain inflation.

"These financing conditions are tighter now in 2022," Martey said, adding that the burden of larger debts will also increase.

"Debt service cost is going to become a bit elevated unless the authorities can work a lot more on mobilizing internal resources and revenues from domestic economies," Martey said.

Overall, there is considerable uncertainty surrounding to 2022 economic predictions, Martey concluded, against a "challenging fiscal backdrop and expected currency pressure from the impact of higher interest rates in the advanced market."

African tourism is forecast to pick up considerably in the next years, after being particularly hard hit in 2020 and picking up slightly in 2021.

That doesn't mean countries should expect flocks of tourists this year, however. Sub-Saharan Africa's low vaccination rates, combined with the the threat of emerging new variants, are a risk that international tourists might not want to take, Martey believes.

He suggested that countries which traditionally rely on foreign visitors should instead target domestic tourists in 2022 to help rejuvenate the sector, adding that getting more people vaccinated was "also critical," as otherwise, it will be difficult to reopen tourism.

As for Afful, he points out that to boost tourism, African nations need to invest heavily in transport infrastructure, especially aviation connections.

"If you are transporting people for tourism's sake, you still need air services," Afful said, adding that making it easier for Africans to get tourist visas to visit other African nations would also give tourism a much-needed push.

Another sector with potential is the digital economy, especially given the need for increased remote solutions due to COVID-19 restrictions combined with Africa's predominantly young population.

For Martey, African governments should support the digital economy, as this could help solve the vast unemployment problem facing Africa's youth.

"Given the current situation we find ourselves in, the role of tech in economic activities and the employment of labor cannot be overemphasized," Martey said.

France and all the EU have justified fears of being affected by African countries' economic challenges. Fair cooperation will address those fears and benefit both Europe and Africa, writes DW's Harrison Mwilima.

The new EU-OACPS Partnership Agreement is only a few weeks old, but already many in Africa are calling for an update. What are the reasons for the dissatisfaction?