The Germans' Sunday walk in the park is a lovely tradition, and is often topped off with eating delicious cake. DW's Louisa Schaefer reflects on these rituals. 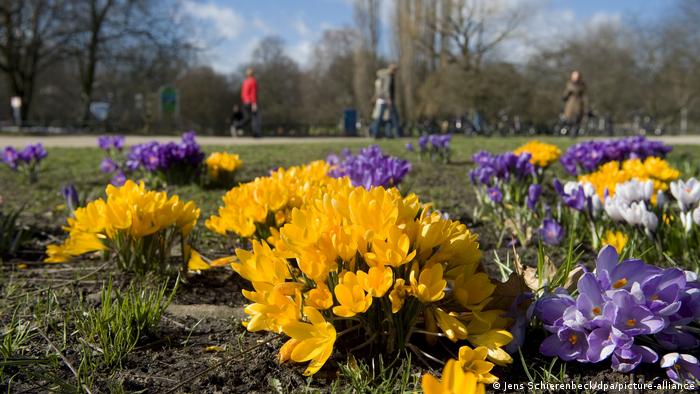 Germans are known for their penchant for hiking, as well as for their supposed love of beer. Yet they also are honed in a subtler, less athletic version of both the sport and the partaking of food and drink.

It's the Sunday stroll with loved ones, rounded out with coffee and cake, and is one of the nicest weekly rituals German culture has to offer.

When the coronavirus pandemic started over two years ago, taking a walk in the woods seemed to be the only way to escape the confines of one's own home without exposing oneself to too many germs. That is, if there were no quarantines in place and one was even allowed outside. And the other part of the ritual — gathering around a table to eat cake together as a big group — was virtually impossible in Germany at the time.

The fact that the tradition was disrupted for a while made me realize how much I appreciated it.

Decades ago, when I was growing up in the United States, I was accustomed to the hearty North American ritual of eating Sunday roast and settling down to watch a football game on TV. Although, I have to admit, I usually tended to curl up with a good book instead.

Mind you, we did go for the occasional walk in the woods, especially in autumn, and I also recall countless walks around the block on my own, or a particularly memorable, spastic undertaking in a warm summer downpour with my best friend. Yet they are snippets out of a seemingly endless stretch of time.

Leap across the Atlantic

Scene change, after graduating from college in the US, relocating to Cologne, Germany — and being introduced to this glorious ritual of Sunday walks and eating cake. 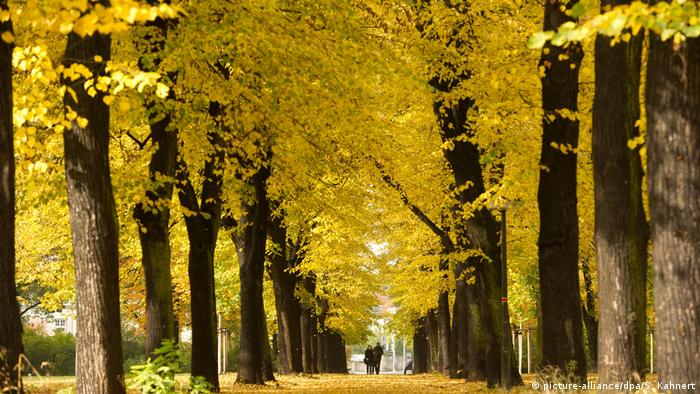 A breath of fresh air and warm light

It went like this: You (if you don't have young kids) sleep in or read on Sunday mornings, eat a nice breakfast, go to your institutionalized place of worship (or not), eat a warm lunch (or not), and then go on a long walk with loved ones: family members, friends, or anyone in-between, catching up on each other's lives, enjoying the fresh air and scenery, stretching your legs and feeling the blood pumping in your veins.

Over the years, I've realized that many people here who do not attend church regularly on Sunday nevertheless view their "day-of-rest" walks religiously. I've been told that they see it as a way of  "communing with the Universe." My father-in-law once said that walking through the forest was his way of going to church.

And cake to top it off

Such Sunday walks have always been so refreshing — both the exercise and the time spent chatting — that you don't feel too guilty about then sitting down in a café or, in your own home, to indulge in several pieces of calorie-heavy, homemade cake and drink countless cups of coffee. It's lovely, this luscious bit of gluttony.

And it's often not just your average apple or sugar cake, but instead extravagant Torten or gateaux: constituted by layers of biscuit and cream, doused with fruit or chocolate icing (my German mother-in-law was particularly skilled in making them), which you certainly may feel guilty about once they're sitting in your stomach.

I have gone on so many Sunday walks in the park or the forest during my over 30 years in Germany that they do not constitute mere snippets, but substantial chunks of my experience of living in this country: with friends to catch up after many busy weeks, with my in-laws during family visits, with my late husband — and nearly always followed by the sweet taste of cake.

Not only have such undertakings always given me a warm, fuzzy feeling inside, I have often felt that many of my own problems were solved after taking such nice long walks. 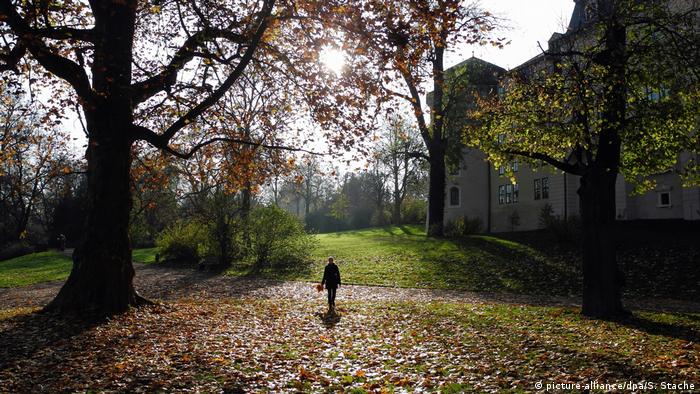 Finding spirit in the woods

I'm certainly in good company in sharing this love of a stroll through the park.

German composer Ludwig van Beethoven notably took long walks through nature as a source of inspiration, first out into the countryside of his hometown Bonn, then later to the outskirts of Vienna, to escape the din and fumes of a city in the throes of industrialization.

During his jaunts, he would pull out pen and paper to jot down his musical ideas, culminating in such works as his Sixth Symphony, also known as the Pastoral Symphony, completed in 1808 — in which he extols the natural environment by integrating sounds of flowing water and thunderstorms and imitations of birdcalls. 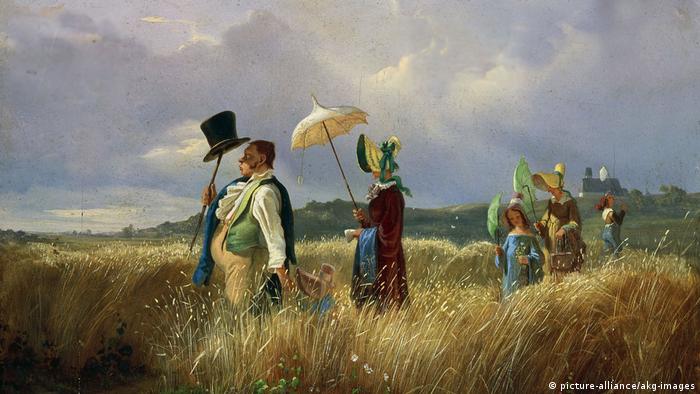 While the English expression "It's not exactly a walk in the park" implies that something is not easy, German speakers take a more positive approach, having immortalized their penchant for a lovely Sunday walk in one word: Sonntagsspaziergang. Everyone knows what it means: a leisurely stroll to unwind on the weekend, after work and chores are done.

It's evidenced in artworks such as Carl Spitzweg's 1841 painting of that name or the variant Osterspaziergang, a walk on Easter Sunday, penned by German poet extraordinaire Wolfgang Johann von Goethe and published in 1808 in his Faust.

The Sonntagsspaziergang and the Osterspaziergang might just be a kind of modern version of the biblical Walk to Emmaus in the Gospel of Luke, in which Jesus himself joins two of his followers on a walk without their first recognizing him. It is only after they stroll along and chat, then sit down and break bread that it dawns on the two who they have before them. 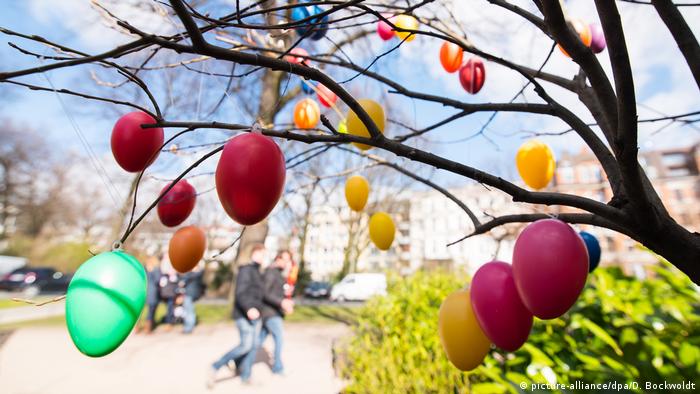 Easter in the air

Centuries ago, as new parks and promenades were created in Europe, aristocrats strolled about outside to relax and divulge in private conversations, a habit that trickled down to the middle class in the 1700s and 1800s. In Germany, the pastime was popularized even more at special spa resorts.

It has even been turned into a special field of studies in Germany: "Promenadologie," or "strollology" in English, was created in the 1980s at the University of Kassel.

Fast-forward to Netflix and TikTok

Years later, after our twins were born, my family would still undertake these mostly Sunday — but also sometimes Saturday — walks. We often didn't cover much distance, meandering along as we did since toddlers want to touch and examine virtually everything in front of their eyes. But, the excursions were always central to our lives, giving us the joy of discovery and the sense of accomplishment any walk can bring. And rewarding ourselves and relieving our sweet tooth afterward didn't hurt, either, with sweet surprises like cakes.

In recent years, it's been harder to motivate my teenagers to take a family walk on Sundays. Cake afterward has remained a decent form of bribery.

Given the marked increase in media consumption and concerns over the increasing lack of physical activity among children, I have felt even more compelled to instill the virtues of weekend walks among my kids — to both relieve as well as boost our often busy, yet sedentary lives, but also to cement our family ties. 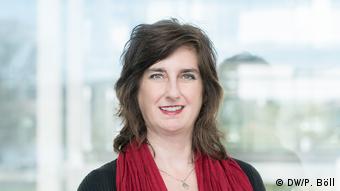 A look to the future

Thankfully, before the pandemic started, my kids were also finding their own way in undertaking these "walks in the park" — taking to the streets in Fridays for Future demonstrations with their school. For them, they were not nostalgic, contemplative walks in the park, but more energized, politicized, modernized rituals in development: schoolkids pleading for greater concern for nature and the environment, rounded out by the parents' visit to an organic bakery offering vegan carrot cake and a soy milk, fair trade café latte.

These were the moments I couldn't help but feel that things had come full circle. I enjoyed accompanying my kids to to the Fridays for Future demonstrations, giving me the feeling that all those previous walks in the park and woods had not been for naught.

You'll find more of Meet the Germans on YouTube or at dw.com/MeettheGermans.

This is an updated version of an article originally published on March 18, 2020.

Don't be fooled by marketing labels! "Superfood" is just another buzzword to boost product sales and prices. But since Germans are going chia, here are a few regional products we should be eating more of. (15.01.2020)

It might be difficult for some people, especially children, to understand why we all of a sudden have to isolate. A look at some of the online content that can help explain why it's key. (16.03.2020)