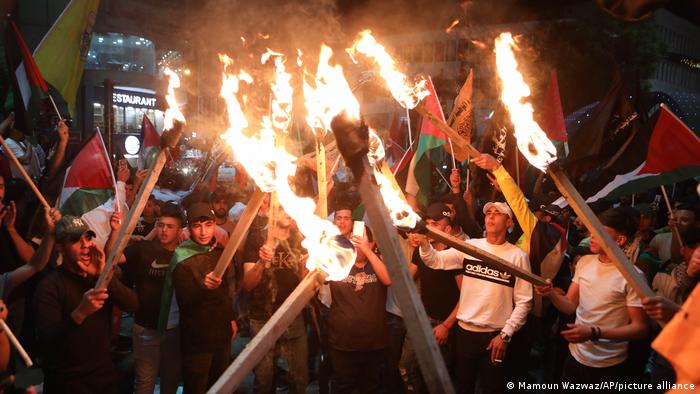 Palestinians have marched in protest against attacks by Israeli police

The recent street fights in east Jerusalem, which led to an open military confrontation between Israel and Hamas in the Gaza Strip on Monday evening, has been grist for the political mills in Tehran and Ankara.

Last August, when first the United Arab Emirates (UAE) and then Bahrain, Morocco and Sudan signed normalization agreements with Israel, both Turkish President Recep Tayyip Erdogan and Ayatollah Ali Khamenei, Iran's supreme leader, called it nothing short of a betrayal of the Muslim world.

Their reaction came in stark contrast to that of the majority of Arab political leaders, who either chose to remain silent or not openly criticize the so-called Abraham Accords. 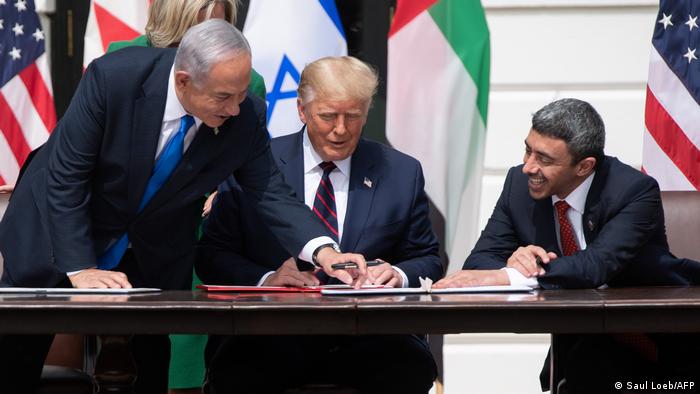 Amid the current escalation in east Jerusalem, both countries have renewed their criticism of Israel.

On Tuesday, Iran's parliament speaker Mohammad Baqer Qalibaf asked in an open session why the international community was remaining silent, and warned that the Islamic community was standing against these "genocides," according to IRNA, the Islamic Republic News Agency.

In Turkey, Erdogan spokesperson Ibrahim Kalin wrote on Twitter that Israel must stop attacking Palestinians in Jerusalem. "The world must act to stop this never-ending Israeli aggression against unarmed civilians in their own land," he said.

Numerous postings on social media against Israel, as well as outspoken messages by popular media outlets that address the Arab world as a whole, have left no room for interpretation. "The illusionary bubbles have burst," wrote the pan-Arab newspaper Al Araby Al-Jadeed. The Qatar-financed daily named all those who "consider normalization with the enemy as their duty" as traitors.

Turkey, Iran 'will try to capitalize on events'

"There is no doubt that both Turkey and Iran will try to capitalize on the events of Palestine politically, and to attack their regional rivals engaging with Israel," Cinzia Bianco, analyst and visiting fellow at the European Council on Foreign Relations (ECFR), told DW.

Erdogan, as well as Khamenei, might exploit the fact that Saudi Arabia, the most important Sunni state in the Arab world, has discreetly though quite successfully improved relations with Israel. It remains to be seen if this will turn into Riyadh's disadvantage against those countries that have been trying to establish their leadership by being hostile toward Israel.

On the other hand, growing pressure from the Arab world makes life more complicated for those politicians and countries, like the UAE, Morocco, Sudan and Bahrain, that have agreed to peaceful relations and economic ties with Israel after decades of frozen and hostile positions.

Even at the beginning, these newly established relations were not well received by parts of these countries' own populations, as well as by many citizens of other Arab states. To counterbalance negative sentiments on the streets, the involved Arab heads of state and government officially justified their signatures with the hope of defusing the Middle East conflict.

At the signing ceremony between the UAE and Israel last summer, Abu Dhabi's Crown Prince Sheikh Mohammed bin Zayed bin Sultan Al Nahyan highlighted that both sides had reached an agreement "to stop further Israeli annexation of Palestinian territories." The deal, agreed in a phone call with then-US President Donald Trump and Israeli Prime Minister Benjamin Netanyahu, also spoke of plans to agree "on cooperation and setting a roadmap towards establishing a bilateral relationship."

"For the Abraham Accords, the Middle East conflict played an indirect role, at best," said Kerstin Müller, a former minister of state in Germany's Federal Foreign Office and a senior associate fellow at the German Council on Foreign Relations. "Economic relations and joint alliances against Iran were much more significant."

Monday's Jerusalem Day, on which Jews celebrated the capture of east Jerusalem in the 1967 Six-Day War, has only served to accelerate the escalation.

"Radical settler organizations have been using this day as targeted provocation by marching through Arab neighborhoods in east Jerusalem," Müller told DW. "However, this time, it has escalated and now has the potential to spark a wildfire."

Israel's new allies are most probably highly aware of the possible impact of the recent tensions in Jerusalem, given the largely pro-Palestinian sentiment in their countries — as well as the pressure they have to endure for being Israel's allies.

Müller has called on the Israeli government to deescalate the situation in Jerusalem. If the tensions continue, she said, other areas of Israeli interest might be affected. "Normalization of relations with the Arab world are part of this," Müller told DW.

"The UAE's interests vis-a-vis relations with Israel are strategic rather than tactical. This means it is unlikely that that the process of normalization will be reversed, but it is quite likely instead that progress on several ongoing joint projects will be frozen for as long as clashes remain in an acute phase," said Bianco of the ECFR.

"The UAE remains alert to the sentiment of the Arab street, which is profoundly moved by the escalation against Palestinians, but does not let it dictate its regional policies," she said.

This article has been adapted from German by Jennifer Holleis.

Four Palestinian families are facing eviction by Jewish settler organizations in the east Jerusalem neighborhood of Sheik Jarrah. The impending expulsion has sparked protests and renewed clashes in Israel.

The White House has steadily lobbied Arab Gulf states to open full diplomatic relations with Israel. Bahrain is now onboard alongside the UAE, and US President Donald Trump claims more will follow.