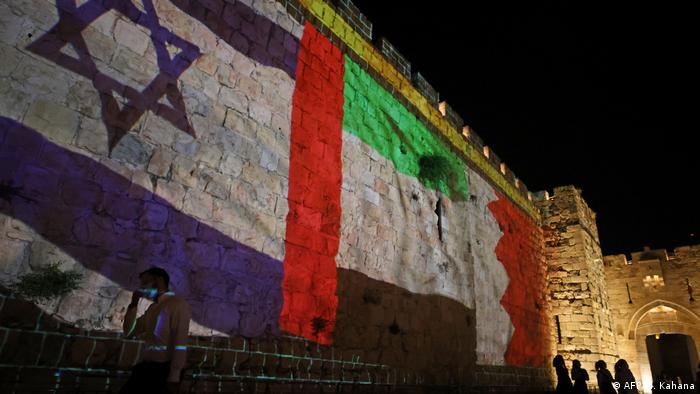 Earlier this week, Israeli Prime Minister Benjamin Netanyahu met with the foreign ministers of the United Arab Emirates (UAE) and Bahrain in Washington to sign a deal normalizing relations between the countries. As the signing took place, 15 rockets were launched from Gaza into neighboring Israel. The Israeli air force retaliated by attacking various military targets in the enclave.

Palestinians in the West Bank, meanwhile, responded more calmly to news of Israel's rapprochement with the UAE and Bahrain, according to Steven Höfner. Höfner, who heads the office of the German Konrad Adenauer Foundation there, said small protests involving some 150 people were staged in the city of Ramallah, while several hundred took to the streets across the whole territory. "Most Palestinians expected the deal to be signed," Höfner said. "They increasingly feel the Arab world cares less and less about the Palestinian people."

At the last Arab League summit, for instance, there was disagreement over whether or not to condemn the rapprochement between Israel and the UAE — even though the Palestinians had implored the body to do so. "This further added to the Palestinians' sense of isolation," said Höfner.

Iranian President Hassan Rouhani, however, has fiercely attacked the normalization agreement. "Where is your Arabism, where are your concerns about the [Israeli] crimes in Palestine, and where is your compassion with your Palestinian brothers?" he asked recently of the UAE and Bahrain.

But it is not important to all in the Palestinian territories what Iran thinks. "In the West Bank, not much attention is paid to such statements coming from Iran," said Höfner. "But they do strike more of a chord with many in the Gaza Strip, where people affiliated with Hamas and the Islamic Jihad Movement are open to an alliance or at least closer ties with Iran." 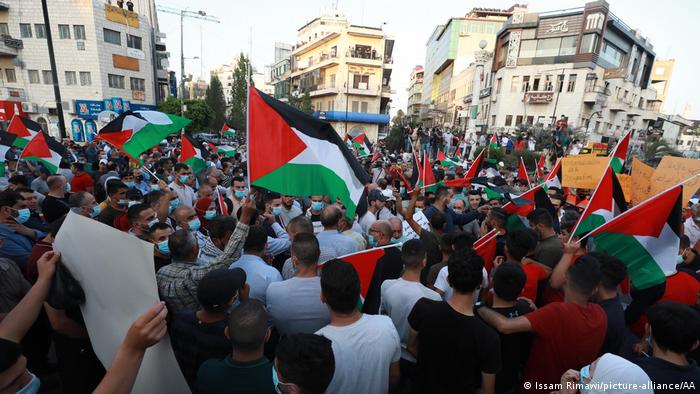 The skepticism of many West Bank residents toward forging a closer relationship with Iran stems from the realization that the theocracy is largely isolated in the Arab world and a target of US sanctions. Edging toward Iran could lead the US to exert direct or indirect pressure on the Palestinians in retaliation.

EU member states would similarly disapprove if the Palestinians were to throw in their lot with the Iranians. Germany, in particular, would be forced to respond if the two sides were to forge an alliance against Israel.

Turkish President Recep Tayyip Erdogan, for his part, did not mince words about Bahrain’s rapprochement with Israel. "[This decision] will encourage Israel to continue its illegal acts against the Palestinians," he said. Earlier, Erdogan had similarly railed against the UAE, saying people in the Middle East would "never forget" the emirates’ "hypocritical behavior."

Erdogan’s comments found more resonance in the Palestinian territories than those from Tehran. "Many are pinning their hopes on Turkey," said Höfner. "They regard Turkey as a state with enough political clout to effectively back the Palestinian cause."

At present, however, Turkey has a lot on its plate in the way of foreign policy problems. It is battling Kurdish organizations in northern Syria, at loggerheads with Greece over natural gas reserves in the Mediterranean, and currently fighting alongside UN-backed Libyan Prime Minister Fayez Serraj. As such, it is unclear whether Turkey even has the capacity left over to throw its weight behind the Palestinians. Moreover, the EU would also be skeptical about a Turkish-Palestinian alliance. 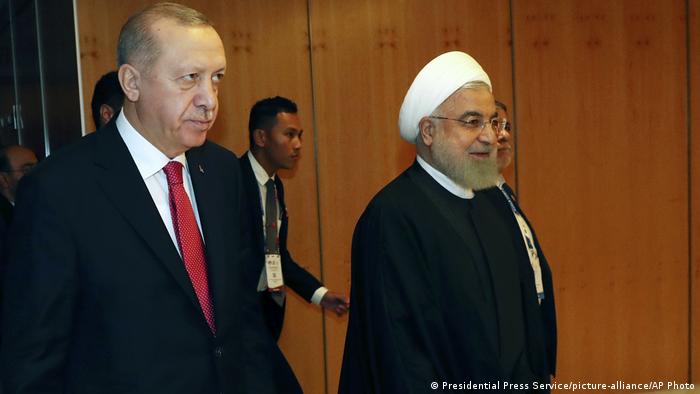 Could Erdogan and Rouhani become the Palestinians' new best friends?

Russia and Qatar to the rescue?

In view of the shifting power balance in the Middle East, the Palestinians are hoping Russia and Qatar will further their cause. Russia has friendly ties with Israel, and the hope in Ramallah is that they can be used to further Palestinian interests. Russia, however, is keen to stay on good terms with Israel, as both countries are active militarily in Syrian air space. This means the two states must maintain close cooperation at a technical level, and in the long term at a strategic level as well.

Qatar, for its part, has pumped vast amounts of money into the Gaza Strip, always in consultation with Israel. "This involvement, in the eyes of many Palestinians, makes Qatar a potential arbiter in future talks with Israel," said Höfner. So far, however, these hopes have also remained unfulfilled.

Riyadh longer the ally it was

For a long time, many Palestinians also considered Saudi Arabia a reliable ally. Indeed, Saudi King Salman has been a vocal supporter of the Palestinians for years. Yet it is unlikely that his son and heir to the throne, Crown Prince Mohammed bin Salman, will maintain this pro-Palestinian stance. According to media reports, he indicated to US President Donald Trump's senior adviser Jared Kushner in several conversations that he approved of US efforts to normalize Israel-Arab ties. For now, however, Saudi Arabia has shied away from any open partnership with Israel. 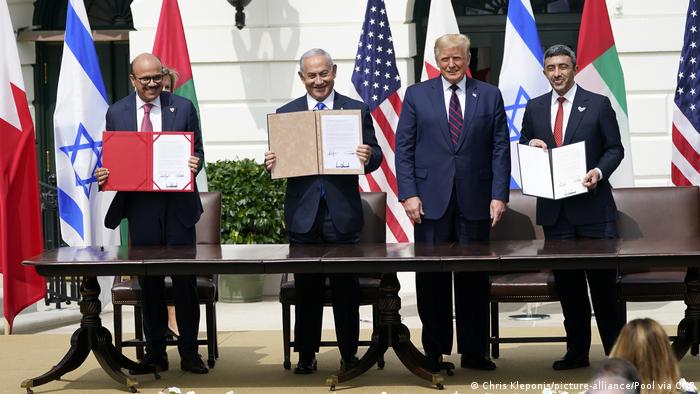 US President Donald Trump presided over the sighing ceremony

Most Palestinians have thus scaled back their expectations of Riyadh. According to a recent poll carried out by the Palestinian Center for Policy and Survey Research, 80% of Palestinians think the Saudis gave the UAE the go-ahead to normalize ties with Israel. Indeed, 82% of respondents said they expect the Saudis to soon follow suit.

Fatah, which governs the West Bank, and Hamas, which controls Gaza, have been trying to overcome their differences in order to one day establish a united leadership for the Palestinian territories. Achieving this, however, will take time, with political reforms and parliamentary elections overdue — the last polls took place in 2006.

Al-Ayyam, a Fatah-affiliated newspaper from Ramallah, argues that for Palestinians to regain influence in the Arab world, they must work out their differences. "Our disunity encourages some countries to withdraw from us and work against the interests of the Palestinian people," the paper states. If they wanted to stop this trend, it says, they must start with themselves. "Otherwise," it warns, "we will lose even more influence and isolate ourselves even further."

Adapted from the German by Benjamin Restle