Several Palestinians, including nine children, have been killed in the Gaza strip as Israel responds to rockets fired by Hamas. World leaders have condemned the violence and called for deescalation. 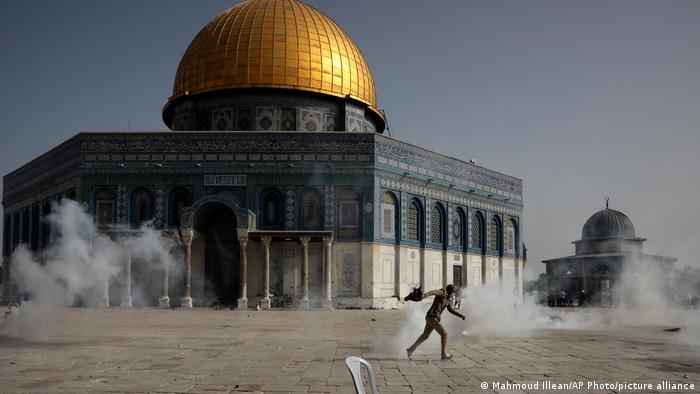 The Al-Aqsa mosque in Jerusalem, one of the most important holy sites in Islam, is built on the sacred Jewish site of the Temple Mount

Violent clashes continued in Jerusalem on Monday following days of protests against Israeli attempts to evict Palestinians living in the Shaikh Jarrah neighborhood in the Israeli-annexed eastern part of the city.

The morning was marked by Israeli police storming the Al-Aqsa mosque compound, and firing stun grenades, tear gas and rubber bullets after police reported that Palestinian protesters had been throwing stones onto a nearby roadway.

Hamas, the paramilitary group in control of the Gaza strip, fired rockets into Israel after Israeli authorities refused to withdraw from the Temple Mount and Shaikh Jarrah neighborhood. Several hundred rockets were launched, but most were intercepted by Israel's Iron Dome defense system.

Retaliatory airstrikes by the Israeli military into Gaza killed eight Hamas militants, according to the military. The Palestinian authorities in Gaza said 20 people were killed, including nine children, and some 65 were wounded.

German Foreign Minister Heiko Maas condemned the latest violence in the region, saying that both Israeli and Palestinian authorities "have a duty to prevent further civilian casualties."

The "significant upsurge in violence" in the West Bank, in and near Gaza and in east Jerusalem "needs to stop immediately," a spokesman for EU foreign policy chief Josep Borrell said on Monday.

US Secretary of State Anthony Blinken also condemned the rockets fired by Hamas and called on the group to "stop immediately." The US, a close ally of Israel, also showed hesitation in supporting a statement from the UN Security Council that was considering calling on Israel to cease evictions in the Shaikh Jarrah neighborhood.

Why are protests going on in Jerusalem?

Tensions in the city, considered a holy site for Jews, Muslims and Christians alike, have surged over recent days with many Palestinians outraged at Israeli attempts to carry out evictions of several families from the Shaikh Jarrah neighborhood.

Tensions were further stoked as protesters and Israeli police clashed around the Al-Aqsa mosque on Sunday, one of the holiest nights during the Muslim holy month of Ramadan.

The Israeli justice ministry subsequently called off the hearing that could have led to the evictions. A nationalist flag-waving march, which had been planned for Monday to celebrate the Israeli capture of Jerusalem, was also called off by organizers after it was made to change its route away from largely Palestinian neighborhoods.

In response to the rockets fired from Gaza, Israel's Prime Minister Benjamin Netanyahu said "the terrorist organizations in Gaza have crossed a red line and attacked us with missiles in the outskirts of Jerusalem."

Israeli citizens were evacuated from the holy site of the Western Wall on Monday after Hamas began to launch rockets. Lawmakers in the Knesset also canceled their session due to safety concerns.

Dr. Hanan Ashrawi, Palestinian leader, legislator and activist who served as an official spokesperson of the Palestinian delegation to the Middle East peace process, told DW that Israel was deliberately provoking Palestinians.

She said the issue would not be resolved by simple compensation.

"Israel wants to see how far it can go in taking over Jerusalem and transforming that character and exercising illegal sovereignty over Jerusalem."