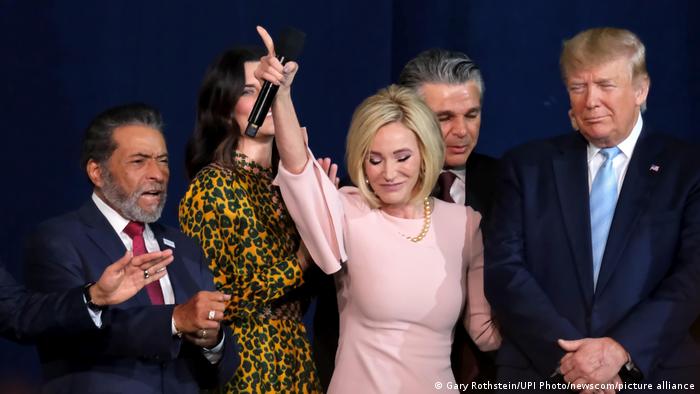 During the summer, when the coronavirus tore through the United States, misinformation campaigns promoted conspiracy theories that could jeopardize the health of hundreds of thousands of Americans. Many evangelical Christians — a loosely defined group of mostly doctrinally conservative Protestants — have been fractured by myths about the COVID-19 vaccine and the pandemic.

Critics have accused right-wing fundamentalist pastors of perpetuating baseless theories that encourage their flock to ignore public health data and experts fighting the coronavirus. Some unfounded claims include the assertion that the vaccine is the mark of the beast, or will cause sterilization in women.

"There is a suspicion that it (the coronavirus) is not real. They are stepping further and further away from reality," says Mark Labberton, president of the Fuller Seminary, an evangelical Christian seminary in California.

With global leaders and governments starting to approve and distribute vaccines, that misinformation could complicate the efforts of public health professionals urging people to get vaccinated. 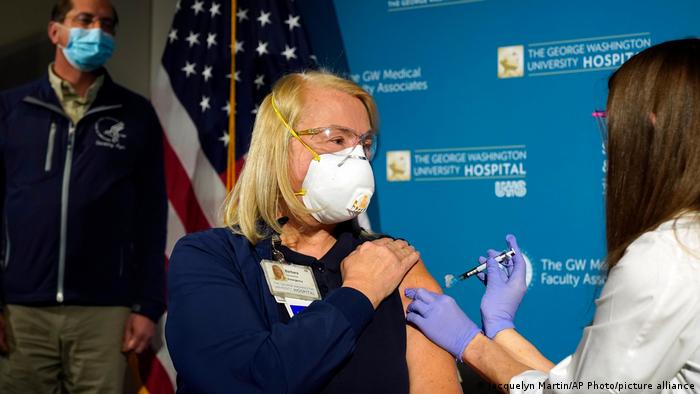 The vaccine has been polarizing among the evangelical right-wing community. Rumors about malicious misuse of the vaccine and mass conspiracies have been cultivated through social media platforms — and continue to be promoted by some church leaders.

Myths suggesting the virus is a coverup for billionaire Bill Gates to implant trackable microchips into people have spread online. Others assert unfounded claims that Dr. Anthony Fauci, the head of the National Institute of Allergy and Infectious Diseases, helped plan the coronavirus pandemic for his personal benefit. The misinformation was peddled by a video pushing the so-called "Plandemic" conspiracy theory, which quickly spread to conservative corners of the web. Social media companies, meanwhile, struggled to contain it.

Pastor Tony Spell of the Life Tabernacle Church in Baton Rouge, Louisiana, has been noted for defying pandemic guidelines since the coronavirus reached US soil. He has held mass church gatherings when state regulations deemed them illegal — and also rejects warnings that the pandemic is dangerous.

"We're anti-mask, anti-social distancing, and anti-vaccine," Spell tells DW. He believes the vaccine is politically motivated and will ultimately make you sick, even though available evidence points to the contrary. Spell says he will continue to discourage his followers from taking the vaccine as it is distributed throughout the country.

A Pew Research survey in July found that around 70% of the public have at least heard the pandemic was planned by so-called elites and 36% of those polled believed it was true. 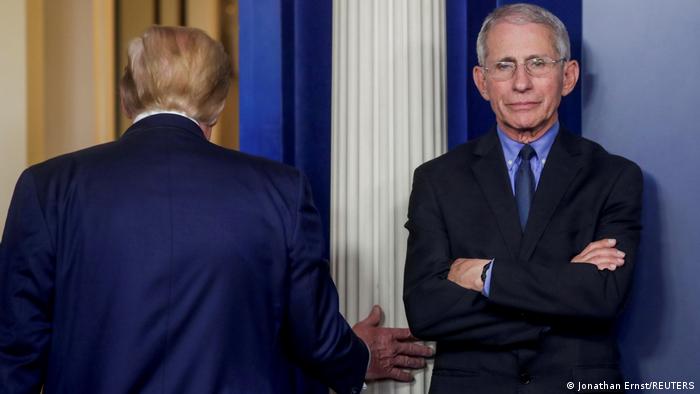 Suspicion among Christian conservatives surrounding the COVID-19 vaccine is a culmination of decades of growing distrust in science, modern medicine, and what is described as the global elite. It's also the root of the larger rejection of vaccines that have for decades helped nearly eradicate several serious diseases, including measles and polio.

"Their primary reasoning is a deep mistrust of the government," says Sam Perry, professor of interdisciplinary core and an expert in right-wing conspiracy theories at Baylor University. "There are certain sections of the Christian right that believe that they are part of the fight of good vs. evil."

The fear among many right-wing evangelicals is that global leaders aremaking decisions without biblical input and against the will of the Christian God. 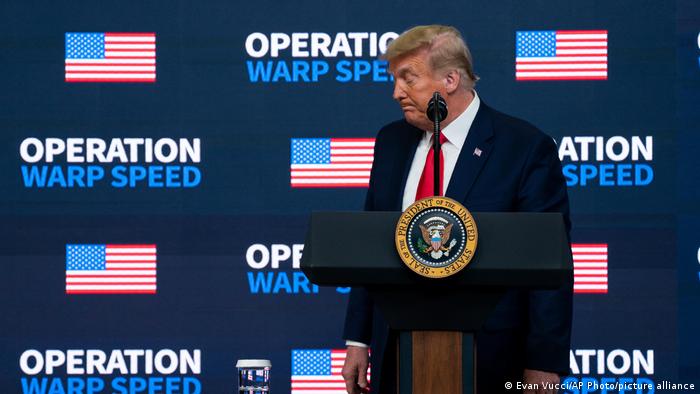 One exception within government, however, is President Donald Trump, who has maintained strong support among evangelicals. Throughout his four years in office, he has held an approval rating as high as 78% among white evangelicals, while 54% of all Protestants support the US leader.

Trump — whose supporters largely see him as a Washington outsider — has used his platform to help perpetuate falsehoods about the coronavirus. He initially called the coronavirus a hoax and has been inconsistent in his messaging about masks — both in his words and actions, repeatedly appearing in large public gatherings without face coverings.

He's also, at times, dismissed the deadliness of the virus, saying it will disappear quickly.

Trump has long been a skeptic of vaccines, even though he has attempted to change his tune as the US has started to approve the COVID-19 vaccine. He has also falsely claimed through Twitter that vaccinations can cause autism in children. Such falsehoods have given momentum to the conspiracies about the vaccine.

"Donald Trump didn't invent this, but he has drastically accelerated this misinformation and some people are predisposed to believe this information," says Peter Wehner, vice president and senior fellow at the Ethics and Public Policy Center and former speechwriter for President George W. Bush. 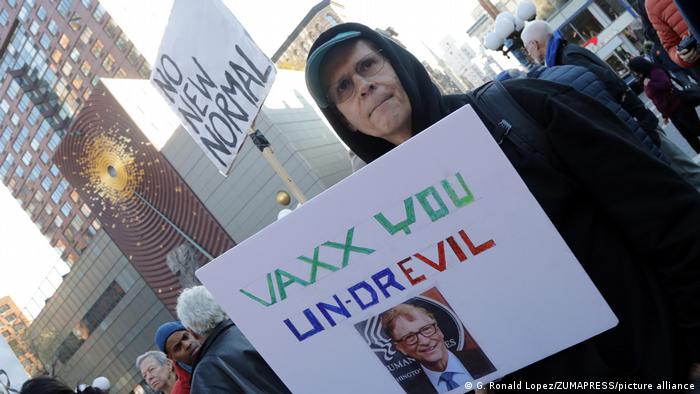 Coronavirus deniers and anti-vaccine proponents have protested around the US, with many touting conspiracy theories

Evangelical leaders have been searching for solutions to counter the false messages about pandemic guidelines and the vaccine.

Government leaders such as Francis Collins, the longtime director of the National Institute of Health and self-described believer in the Christian faith, has spoken directly with faith leaders to tamp down anxieties about the vaccine.

In late August, a group of more than 2,700 Christian leaders signed a letter written by Collins' advocacy group The BioLogos Foundation supporting the "science in the pandemic times."

The letter begged Christians to "wear masks, get vaccinated and correct misinformation." 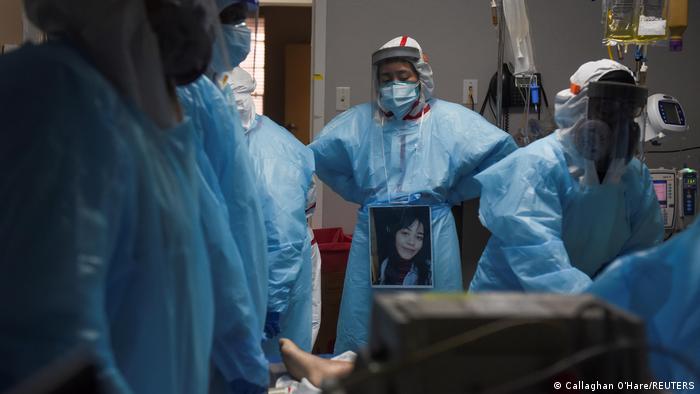 "Over the summer we saw increasing amounts of conspiracy theories circulating and we wanted to show that there are members of the Christian community and many others who support the public health measures," Deborah Haarsma, president of BioLogos, tells DW.

The US, which recently approved a coronavirus vaccine, will also transition from Trump's presidency to that of newly-elected Joe Biden. The difficult task will then fall on Biden's team to help dispel the misinformation that the previous administration helped spread — or at least failed to contain.

"There are prominent pastors and churches that have essentially rejected the science. It's never a good idea in the midst of pandemic," says Wehner.