Nearly two months after was taken to Germany for treatment for COVID-19, Algerian President Abdelmadjid Tebboune made his first televised appearance. 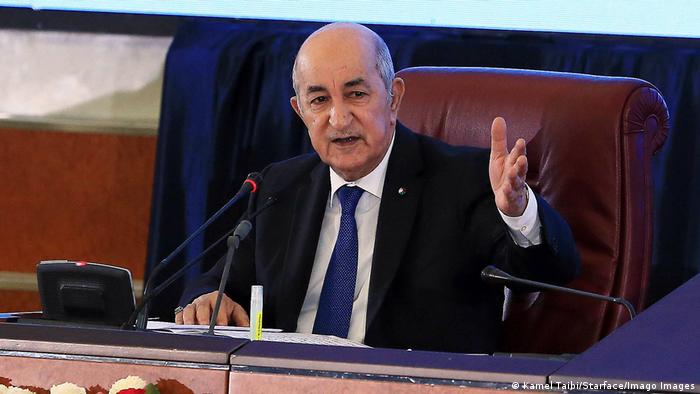 Algerian President Abdelmadjid Tebboune returned to the public eye for the first time on Sunday, nearly two months after he was flown to Germany for treatment after testing positive for the coronavirus.

In an address that was broadcast on state television and posted on his Twitter account, Tebboune said he was recovering from COVID-19 and hoped to return to Algeria soon.

"Thanks to God ... I have started on the road to recovery," the 75-year-old leader said. "It may take two or three weeks but, God willing, I will recover all my bodily strength."

"We will soon be in the country to continue building a new Algeria," Tebboune added.

He did not say where he was currently located, but said he'd "been following what is taking place in Algeria on a daily basis."

Saturday marked the one-year anniversary of his election.

The president's last public appearance had been in mid-October, when he met with France's foreign minister.

Tebboune, a heavy smoker, was flown to Germany and hospitalized on October 28. Algerian authorities later announced that he'd contracted COVID-19.

His long absence sparked concerns about an institutional crisis in the North African country. He has been unable to sign into law the country's revised constitution which was approved in a recent referendum that saw record-low turnout.

He also has until December 31 to sign off on the country's 2021 budget.

The radio silence on his condition reminded many Algerians of his predecessor, Abdelaziz Bouteflika, who was frequently hospitalized abroad.

Bouteflika rarely appeared in public but continued ruling after he suffered a stroke in 2013 and was treated in France and subsequently Switzerland.