The referendum includes a limit on presidential terms, new powers for the parliament and a clause to let the army intervene outside Algeria's borders. Less than a quarter of the electorate turned out to vote. 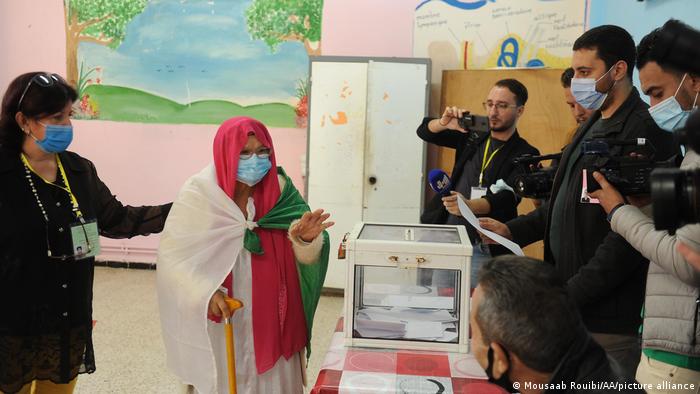 Algerians approved a referendum on a revised constitution, the country's electoral commission said on Monday. The changes were touted as pro-democratic for imposing term limits and promising new civic freedoms.

Polls opened on Sunday, and after a historically low turnout, the referendum was passed with 66.8% of the votes cast, National Independent Elections Authority chief Mohamed Charfi told a press conference.

He had earlier announced a turnout of just 23.7% of the electorate — a historic low for a major vote.

The changes approved in the referendum include presidential term limits, new powers for the parliament and judiciary and a clause to let the army intervene outside Algeria's borders.

Around 3.3 million voters backed the changes, while 1.6 million voted against them. President Abdelmadjid Tebboune, who is hospitalized in Germany following reported cases of COVID-19 among is staff, touted the reform process as a way to satisfy the demands of members of the Hirak street protest movement. However, the group had called for a boycott of the referendum, which they said did not go far enough.

Tebboune had been elected in December in a poll with a turnout of just under 40%, the lowest in a presidential election since Algeria gained independence in 1962. The referendum comes almost 19 months after mass protests rocked Algeria and forced long-time president Abdelaziz Bouteflika to step down.

Mass demonstrations led by the Hirak movement were carried out for months, demanding deep reforms to the ruling system. Protests were suspended in March due to the spread of coronavirus.

"The fact that the people were able to express themselves in total independence was another step in the construction of the new Algeria which began with the blessed Hirak," said Charfi.

However, the document was written by a committee of experts chosen by the regime, and maintains key appointments in the hands of the president. Additionally, critics and experts say that the new freedoms enshrined in the reform are not guaranteed.

The run-up to the vote also saw a string of arrests and court rulings against pro-Hirak activists, socail media users and jorunalists, according to the CNLD, a prisoners' support group.

Decades after the first French nuclear test in Algeria, thousands of victims are still waiting for compensation from the government. Why is France dragging its feet over the issue?