Lakhdar Bouregaa, a popular veteran of Algeria's war of independence, was among those freed. The mass release comes as the new president faces a protest movement that views him as illegitimate. 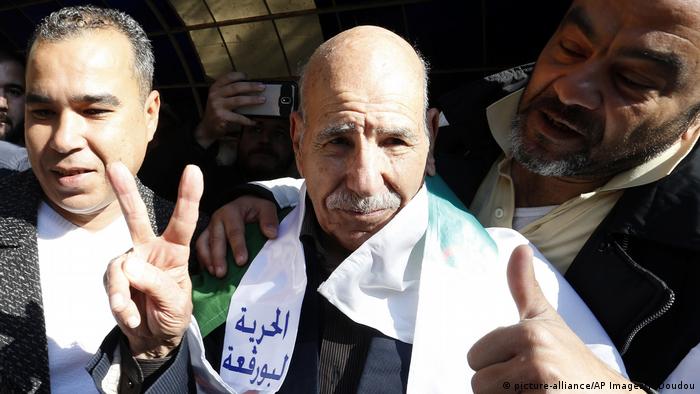 Lakhdar Bouregaa, a popular veteran of Algeria's war of independence, was among those released, as was retired general Hocine Benhadid. Bouregaa was the founder of the Front for Socialist Forces, one of Algeria's oldest opposition parties.

Bouregaa, 86, was arrested in June for "insulting a state body" and "taking part in a scheme to demoralize the army with the aim of harming the nation's defense." His name became a rallying cry for many anti-government protesters, who demanded his release.

Bouregaa's lawyer said he would remain free during his trial, which has been postponed until March 12.

His arrest was widely attributed to comments he made about army chief Ahmed Gaid Salah, who masterminded the state's response to mass protests that led to the fall of longtime president Abdelaziz Bouteflika last April. Gaid Salah died suddenly from a heart attack in December.

Protesters accused Gaid Salah of working to keep the army and ruling elite in power after Bouteflika's departure, but many also credited him for the army's restrained response to protests.

Abdelmadjid Tebboune, an ex-premier under Bouteflika, was sworn in as Algeria's new president on December 19 after elections pushed by Gaid Salah but deemed illegitimate by the protest movement.  He took 58% of votes with a turnout of 40%.

Tebboune is seeking dialogue with a nearly ten-month-old leaderless protest movement that continues to stage demonstrations since his election. The release of the prisoners may be a move to appease protesters and convince the opposition to talk.

"The release of Bouregaa today is a good signal to alleviate the tension," analyst Farid Ferrahi told Reuters.

The prisoner release came as Algeria appointed a new government on Thursday with many top posts unchanged, signalling that Tebboune and the new Prime Minister Abdelaziz Djerad intend to maintain the status quo.

Algeria's political crisis is matched by economic problems caused by falling energy revenues from the oil and gas sector.