Algeria's state news agency APS has reported that the country's embattled president has quit. His stepping down comes after weeks of street protests, delays and resignations. 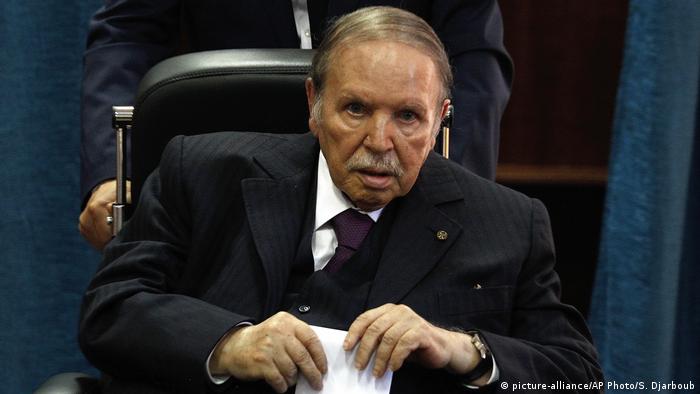 Algeria's president informed the country's constitutional council Tuesday of his decision to stand down, state news agency APS has reported.

'For the Algerian people to decide'

French Foreign Minister Jean-Yves Le Drian hailed the move as "an important page in the history of Algeria that turns."

"We are confident in the ability of all Algerians to continue this democratic transition in the same spirit of calm and responsibility," Le Drian said in a statement.

The United States said the future of Algeria is up to its people, following Tuesday's announcement.

"Questions about how to navigate this transition in Algeria, that is for the Algerian people to decide," a state department official told reporters.

Ailing leader: Bouteflika ruled Algeria for 20 years. He had a stroke in 2013 and has rarely been seen in public since. He came to power with the support of an army battling Islamist guerrillas, but nobody expected him to stay in office for so long.

Protests since February: Bouteflika's decision to seek a fifth term despite rarely being seen in public since his stroke sparked six weeks of protests throughout the country. The demonstrations caused some of Bouteflika's faithful backers to gradually desert him, including Salah, who had pressured the Algerian leader to step down.

What happens next: The Constitutional Council is expected to meet on Wednesday to confirm Bouteflika's resignation. Under the constitution, the speaker of the upper house, in this case Abdelkader Bensalah, a Bouteflika ally, steps in as the interim president for a maximum of 90 days so that elections can be organized.

Algeria: An army chief, an ailing president and a political crisis

Algeria's army chief, Ahmed Gaid Salah, has urged President Abdelaziz Bouteflika to step down. Many Algerians support the move, but question whether the army has the legitimacy to take that kind of action. (28.03.2019)