The president's office made the announcement after weeks of street protests, delays, resignations and political discussions. The powerful military had also called for President Abdelaziz Bouteflika to go. 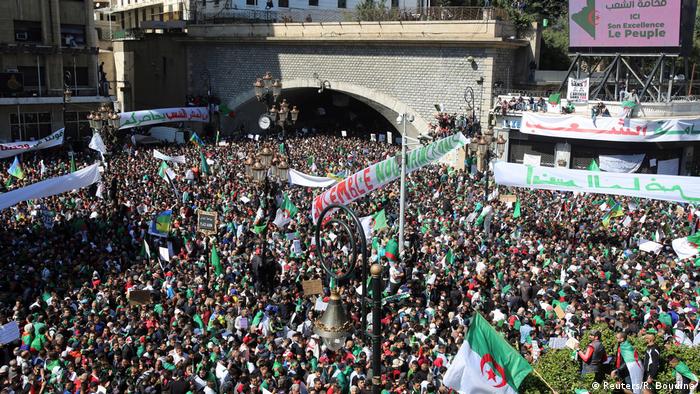 President Abdelaziz Bouteflika is to resign before his mandate expires on April 28, his office said Monday.

The president will take "steps to ensure state institutions continue to function during the transition period," Bouteflika's office said in a statement relayed on television. The "resignation would occur before April 28, 2019."

The 82-year-old president has rarely been in public since he suffered a stroke in 2013.

While he had declared his candidacy for a fifth term in February, he then withdrew and postponed the election in response to massive protests.

Will it be enough to quell protests?

Since protests erupted when Bouteflika announced his bid for a fifth term, protesters have signaled they don't just want Bouteflika out but the entire power structure overhauled.

Earlier on Monday, hundreds of demonstrators took to the streets again, decrying the newly appointed Cabinet as a continuation of the old regime.

The new Cabinet was "an additional provocation for Algerians," he said, because protesters had clear demands for a government whose members had "not participated in corruption and fraud over the last 10 years."

A new face for an old government

Powerful General Gaid Salah was another Cabinet appointee to retain his post as deputy defense minister even after he had renewed calls on Saturday for a constitutional process to declare Bouteflika unfit for office.

The opposition Labor Party said it was "unclear on what basis these figures were chosen," according to German agency dpa.

The party said "the so-called new government" aims to ensure "the continuity of the regime and the repressive presidential system rejected by the overwhelming majority."

Getting ready to go

It had been expected that Bouteflika would resign this week after local media reports interpreted the Cabinet reshuffle as preparations for his departure.

Bouteflika has held office for 20 years and was credited with quelling a brutal civil war in the 1990s.

Since then, he had weathered smaller protests during the Arab Spring of 2011, but public dissatisfaction grew louder when he took his fourth oath of office from a wheelchair in 2014 after suffering a stroke the previous year.

New protests erupted in February when he announced his fifth run through a statement issued while he was in hospital in Geneva for "routine medical checks."