The EU's chief diplomat Josep Borrell has threatened Moscow again with penalties over jailing its most prominent opponent. EU foreign ministers are expected to meet on Monday to discuss sanctions. 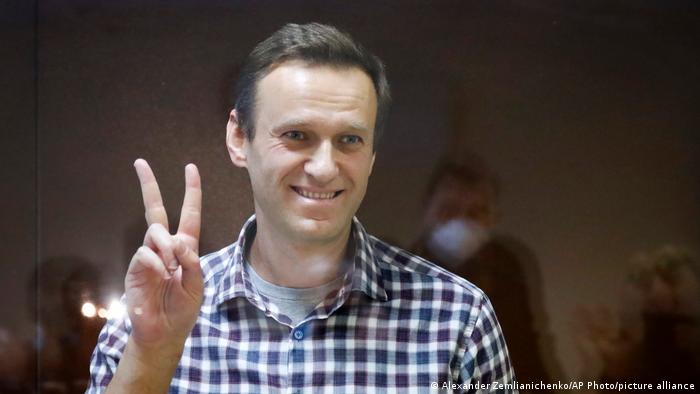 Alexei Navalny was jailed after arriving back in Russia in January

Borrell will discuss measures at a meeting of EU ministers for foreign affairs on Monday and prepare action against Moscow.

The EU diplomat said he has also noted that Russian courts are continuing to ignore a ruling from the European Court of Human Rights (ECHR) that Navalny should be released.

Russia, however, has rejected the court's ruling as interfering in its domestic judicial affairs.

Support for EU measures against the Kremlin appears to be growing,

Alexander Schallenberg said he expects "a broad majority of support" for sanctions among the EU's 27 members, but added the sanctions "have to be politically smart and legally watertight."

He told Germany's Welt Am Sonntag newspaper the bloc will use new powers that governments agreed on last year to punish human rights abuses.

"This also includes targeted measures against individuals within the framework of the newly created human rights sanctions regime," he said. "I expect a broad majority of support for this."

"Just commenting on what is happening in Russia from the sidelines and threatening sanctions is not enough," he said. "Russia is a reality in our neighborhood that we cannot simply 'talk' away, but that we have to face."

Brussels to hold talks with Blinken

The meeting of the EU's foreign ministers on Monday will include a wide-ranging video conference with new US Secretary of State Antony Blinken. Discussions will also touch on the recent military coup in Myanmar and the Iran nuclear deal.

The move to target the Kremlin comes two weeks after EU foreign policy chief Josep Borrell was caught in a diplomatic ambush in Moscow that enraged member states.

EU diplomats quoted by the AFP news agency said the new measures would focus on travel bans and asset freezes.

The EU has imposed sanctions on Russia in the past, hitting Moscow with a series of restrictive measures over its 2014 annexation of Crimea.

It also drew up a list of individuals believed to have been involved in the 2018 poisoning of a former Russian agent in the United Kingdom.

Last year, the bloc blamed and sanctioned Moscow for cyberattacks on the Organization for the Prohibition of Chemical Weapons and the German Bundestag.

It also blacklisted six officials in October over the poisoning of Navalny with Novichok, a nerve agent. The opposition figure then flew to Germany for medical treatment, returning home last month.

Navalny was sentenced to 3 1/2 years in a prison camp at the beginning of February. Judges denied his appeal on Saturday.

Hours later, he was convicted in the same court of slandering a World War II veteran and fined the equivalent of €9,500 ($11,500).

He has blamed Putin for last year's near-fatal nerve agent attack, and has said the charges against him are fabricated.

The Kremlin has denied any involvement in Navalny's poisoning.