After the UK and Australia accused Moscow of worldwide hacking attacks, the Netherlands has revealed an attempted attack on the UN chemical weapons watchdog. Russia says its accusers are living in a fantasy. 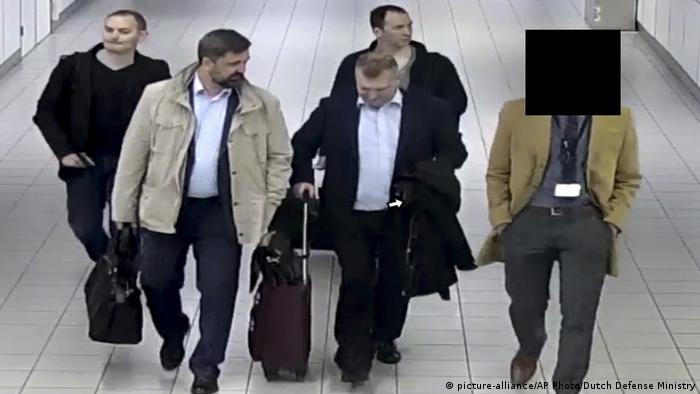 Four Russian GRU agents were expelled from the country for attempting a cyberattack on the Organization for the Prohibition of Chemical Weapons in The Hague, Ank Bijleveld told a news conference. The Russian ambassador has been summoned for an explanation.

The group had allegedly positioned a car full of electronic equipment in the car park of the Marriott Hotel next to the OPCW building and were trying to hack its computer system. The equipment included a hidden antenna to intercept wireless network communications in the building.

Inside, the OPCW was attempting to identify the substance used in the March poisoning of former Russian double agent Sergei Skripal and his daughter Julia as well as the identity of a substance used in an attack in Douma, Syria.

The group allegedly planned to travel on to a laboratory in Spiez, Switzerland used by the OPCW to analyze chemical weapons samples.

He said that a laptop belonging to one of the four was also linked to operations in Brazil, Switzerland and Malaysia. The Malaysia events were allegedly related to the investigation into the 2014 shooting down of flight MH17 over Ukraine.

The US Justice Department announced after the revelations that it had charged seven Russian military intelligence officers with hacking anti-doping agencies and other organizations.

They said the GRU had also targeted a Pennsylvania-based nuclear energy company and the OPCW.

US Defense Secretary Jim Mattis said Russia must be held accountable for its attempts to hack the OPCW.

"Basically, the Russians got caught with their equipment, with people who were doing it and they have to pay the piper, they are going to have to be held to account. How we respond is a political decision by the nations involved," Mattis said after a meeting with his NATO counterparts.

Shortly after the Netherlands revealed its claims, Canada said it too had been targeted by Russian cyberattacks. It said it had detected breaches at its center for ethics in sports and at the Montreal-based World Anti-doping Agency.

"The government of Canada assesses with high confidence that the Russian military's intelligence arm, the GRU, was responsible" for these cyberattacks, the Foreign Ministry said in a statement.

He backed the Netherlands and the UK and said Moscow had shown a pattern of attempted election interference and disinformation campaigns.

"NATO will continue to strengthen its defense and deterrence to deal with hybrid threats, including in the cyber domain," he said. NATO defense ministers were meeting on Thursday to discuss new offensive cyber capabilities.

Earlier, British and Australian authorities accused Russia of being behind multiple global hacking attacks, calling it a "pariah state."

British Defense Secretary Gavin Williamson said:  "Where Russia acts in an indiscriminate and reckless way, where they have done in terms of these cyberattacks, we will be exposing them."

Russia responded to those allegations by calling them "big fantasies" and saying the UK had a vivid imagination.

On Wednesday US news outlets reported that Washington was expected to make its offensive cyber warfare capabilities available to NATO, in an attempt to strengthen its defenses against Russian electronic attacks.

UK and US accuse Russia of cyberattack that compromised global networks

The Kremlin has dismissed as "groundless" allegations that Russian-backed hackers have been compromising network devices worldwide. The statements come amid heightened tensions between the two countries and Russia. (17.04.2018)

Microsoft said Kremlin-linked hackers created fake domains to mimic US Senate websites and those of two conservative think tanks ahead of midterm elections. Russia denied any knowledge of the software company's claims. (21.08.2018)

Despite opposition from Russia, members of the OPCW granted new powers to the chemical weapons watchdog, allowing it to name perpetrators of chemical attacks. Moscow accused the UK of dragging the OPCW "in their games." (27.06.2018)